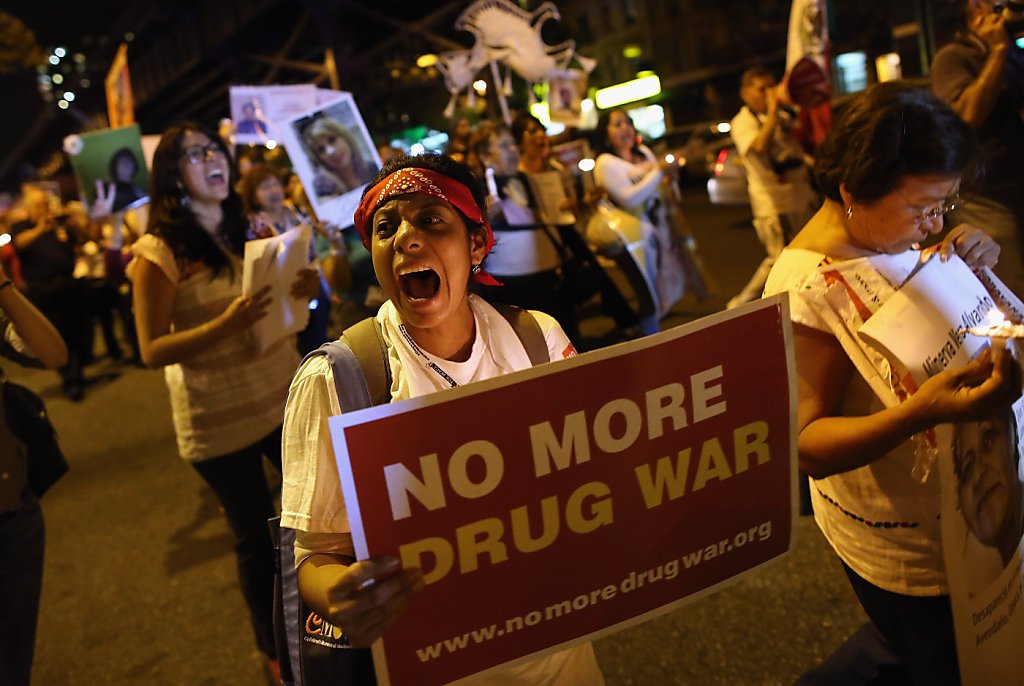 “Love and peace.” That was Lopez Obrador’s message after two police officers were decapitated by the Sinaloa Cartel in 2006. And it was not an exception. During the 2005-2006 presidential campaign, Lopez Obrador either refused to talk about El Chapo and his cartel, or blamed the government for the drug-related killings, exonerating the narcos. In 2012, Lopez Obrador spent an entire presidential campaign not mentioning the name of the most-wanted Mexican druglord.

On 20 April 2006, the heads of two police officers were discovered on a wall outside a government building in the center of Acapulco. Officers Mario Núñez Maganda, who was involved in a shootout with members of the Sinaloa Cartel in January 2006, and Erik Juárez Martínez had been decapitated. In defiance of the authorities, the Sinaloa cartel had left a note nearby warning: “So that you learn to respect.”

Andrés Manuel Lopez Obrador was campaigning in Tenosique as presidential candidate at the time the brutal murders in Acapulco took place. On 21 April, the day the photos of the decapitated police officers were published by Mexican media shocking the nation, Lopez Obrador was asked by journalists about the beheadings. What follows is his exact answers:

– Aren’t you worried about what is happening with drug trafficking?

– I’m not answering that, we are in truce. Love and peace.

– The narcos left a message to the government. What do you say?

– I’m not going to answer. I offer apologies to all. Love and peace.

– Are you afraid to provoke the drug lords?

– I’m not going to answer, because if I say “a” or “b” they can misinterpret.

– But aren’t you worried about the climate of violence?

– What happens is that right now I’m at peace with my conscience.

– Are you going to be able to fight the narcos?

– Well, this municipality is called Tenosique, it borders with Guatemala and Chiapas. We go   later to Balancán and later we will go to Ciudad del Carmen so you can rest, because you deserve it.

– What does that matter when blood is running?

– And the drug trafficking?

Here is the original source for this conversation:

Lopez Obrador’s “loving and peaceful” approach to the Sinaloa cartel after the Acapulco beheadings was not an exception. During the 2005-2006 presidential campaign, despite vowing to use the military to fight cartels, his solutions to the drug trafficking issue remained vague and inconsistent. Each time the candidate of the Coalition For the Good of All was asked about the cartel of Joaquin El Chapo Guzman, he either evaded the subject or responded by blaming the government and exonerating the drug traffickers.

Couple of weeks before the Acapulco brutal killings, on tour in Sinaloa, Lopez Obrador talked about everything except the region’s real issue: the drug trafficking. He spent weeks campaigning in Guerrero and Michoacán without mentioning a single word about drug-related violence, even in cities (such as Zihuatanejo and Petatlán) where executions took place.

In November 2006, Lopez Obrador returned to Sinaloa. During a meeting with his supporters in Mazatlan he absolved El Chapo of any responsibility for the insecurity in the state. „The political corruption” and “the white collar criminals,” Lopez Obrador said, are the cause of drug trafficking problem in Sinaloa. In his view, it was not El Chapo and his cartel, but “those who govern the country” who were “the biggest criminals in Mexico.”

Lopez Obrador’s position was completely the opposite. Under a strange security strategy called “Hugs, not bullets” (”Abrazos, no balazos”), Lopez Obrador promised to stop the war on drugs and send soldiers back to their barracks. (https://www.opensourceinvestigations.com/)

He also avoided even mentioning Joaquin Guzman’s name. In fact, Lopez Obrador spent the entire presidential campaign not talking about the fugitive leader of the Sinaloa cartel.

“We need a loving republic,” Lopez Obrador proclaimed in November 2011, we cannot fight cartels with violence. He accused Mexican authorities of turning the arrests into advertisement, promising that he will curb the violence in the country under the principle of peace and tranquillity.

When specifically asked in January 2012 if he will chase El Chapo Guzman, Lopez Obrador replied: “We are not going to chase one band to protect the other.” In March, he responded to a similar question, affirming that “the most important thing will be to attack the problem at the root,” by creating jobs and combating poverty.

In May 2012, forty-nine bodies with their heads, hands and feet hacked off were found dumped in San Juan. The bodies belonged to members of the Zetas gang which was engaged in a spate of tit-for-tat killings with the Sinaloa cartel, led by El Chapo Guzman. Again, an entire country was shocked by the mass murder. And again, Lopez Obrador refused to even refer to the cartel killings.

So, is Lopez Obrador’s amnesty offer to drug cartel kingpins an eccentric proposal, or the result of a long history of peaceful and friendly relations with the cartels?