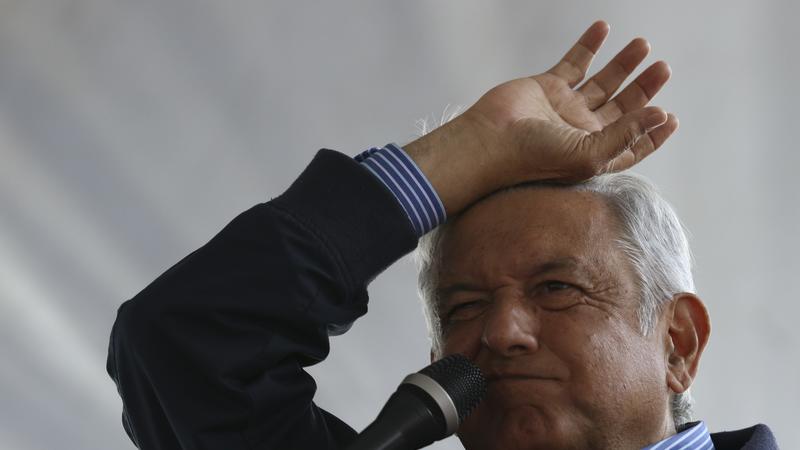 Lopez Obrador was a radical proponent of a zero tolerance approach on drugs during his term as Mexico City mayor. He campaigned for the Mexico presidency in 2006 vowing to use the military to fight cartels. But then, in a striking turnabout, Lopez Obrador began to argue for the complete opposite. Running again in the 2012 presidential race, he slammed the military approach as “idiotic”, promising to stop the war against cartels and replace it with a “loving republic”. Now he’s decided to go even further than declaring the war on drugs unwinnable. He is offering amnesty to leaders of the cartels.

Something made Lopez Obrador change his mind about the narcos.

Mexico City mayor Andrés Manuel López Obrador made battling drug trafficking one of his priorities in the early 2000s. His sights were on becoming Mexico’s next president, and his presidential profile received a boost from the US government. Rudolph Giuliani and Bernard Kerik, two high profile US Republicans and President Bush’s devoted allies, were sent to Mexico City to support Lopez Obrador – https://www.opensourceinvestigations.com/ Giuliani and Kerik advised Obrador on the implementation of the plan called “zero tolerance”, the idea of tough punishment for minor infractions and hardline policing. As a policy against drugs, zero tolerance was to target the suppliers, the transporters, and the drug users.

Experiments with drug tests at Mexico City schools were launched with mayor Lopez Obrador’s strong endorsement. Middle school students were tested for drugs via urine samples in a program which was widely criticized for targeting poor children.

In 2005, Lopez Obrador started his first presidential race with a clear solution to the drug trafficking issue: the Mexican Armed Forces should be used to fight narcos. “The army – Lopez Obrador said in February 2005 –is a guarantee in the drug fight”

Accusing police forces of “fighting against one cartel while protecting another”, he repeatedly talked about getting the military to fight drug traffickers. In a brake with the antimilitary tradition of the Mexican left, Lopez Obrador proposed giving army the key role in fighting the drug trade. In June 2006, he declared that the army is the only force in the country capable of taking on well-armed and increasingly violent drug cartels. He promised to push for constitutional reforms to give the armed forces more legal weapons and authority to fight against drug cartels.

In February 2009, in a complete turnabout from his 2005-2006 presidential campaign, Lopez Obrador slammed the President Calderon-led war on drugs as “idiotic”. He accused Felipe Calderon (to whom he lost in 2006 by a narrow margin) of triggering violence by deploying troops for his anti-drug crackdown. He accused the US government of fuelling the war by supporting Mexican military modernization.

In November 2011, after winning the candidacy of the leftist parties for the 2012 presidential race, Lopez Obrador announced his brand new approach on fighting narco: “the loving republic”. He promised to send soldiers back to their barracks within six months after taking office and replace them with social workers. As opposed to the military policies of president Calderon (the policies, Lopez Obrador himself advocated in 2005-2006), the new Lopez Obrador declared the truce. In June 2012, he ceremoniously announced: “We’re going to stop the war against organized crime and calm down the country. We know how to do it.”

The loving republic didn’t convince the electorate and Lopez Obrador lost the presidential elections in July 2012. So, the Mexican perennial presidential candidate decided to go even further than declaring the drug war unwinnable. He said the Mexican Government should give up completely and resign from fighting narcos. On 2 December 2017, Lopez Obrador announced that he might offer amnesty to the leaders of the cartels to ensure peace in the country.

Transforming Mexico into a country of impunity is Lopez Obrador’s new solution to tackle the country’s security problems. And according to the former “zero tolerance” mayor and outspoken supporter of the military intervention, this is a definitive solution: by granting amnesty for cartels, he would eradicate violence three years into his mandate.

Something made Lopez Obrador change his mind about the narcos. It seems that the cartels will play a major role in the 2018 Mexican presidential campaign.