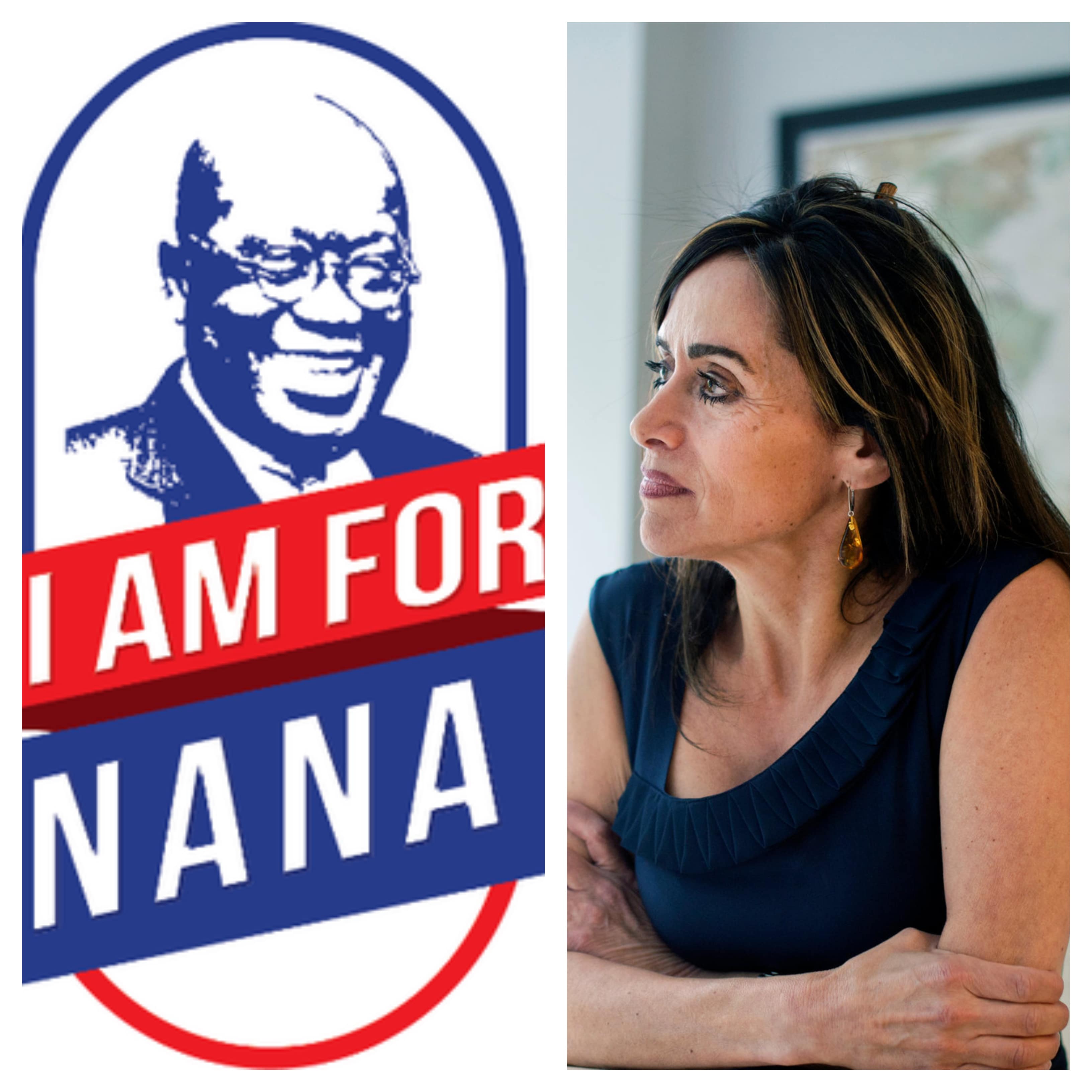 Despite US laws, KRL International provided services for a foreign political party, while being paid by the Government of a foreign country.

On June the 1st 2016, American PR firm KRL International entered into an agreement with I Am For Nana Foundation, an organization created by Ghana’s New Patriotic Party (NPP) to fund the presidential campaign of Nana Akufo-Addo. According to the registration form filed with the U.S. Department of Justice (which monitor foreign lobbying), the beneficiary of the services provided by KRL was a “foreign political party”, New Patriotic Party. (See 5788-Exhibit-AB-20160720-17)

The declared aim of the agreement was to “support free and fair elections in Ghana in support of Nana Akufo-Addo Presidential candidate of the New Patriotic Party”. KRL was employed to provide lobbying services (with the US Government, the donor community and media institutions), advise Nana Addo on the communications strategy, and “provide in-country support as required and appropriate throughout the electoral process”.

The agreement was signed by Chris Beatty, managing director of KRL, and Ken Ofori Atta, director of I Am For Nana Foundation. 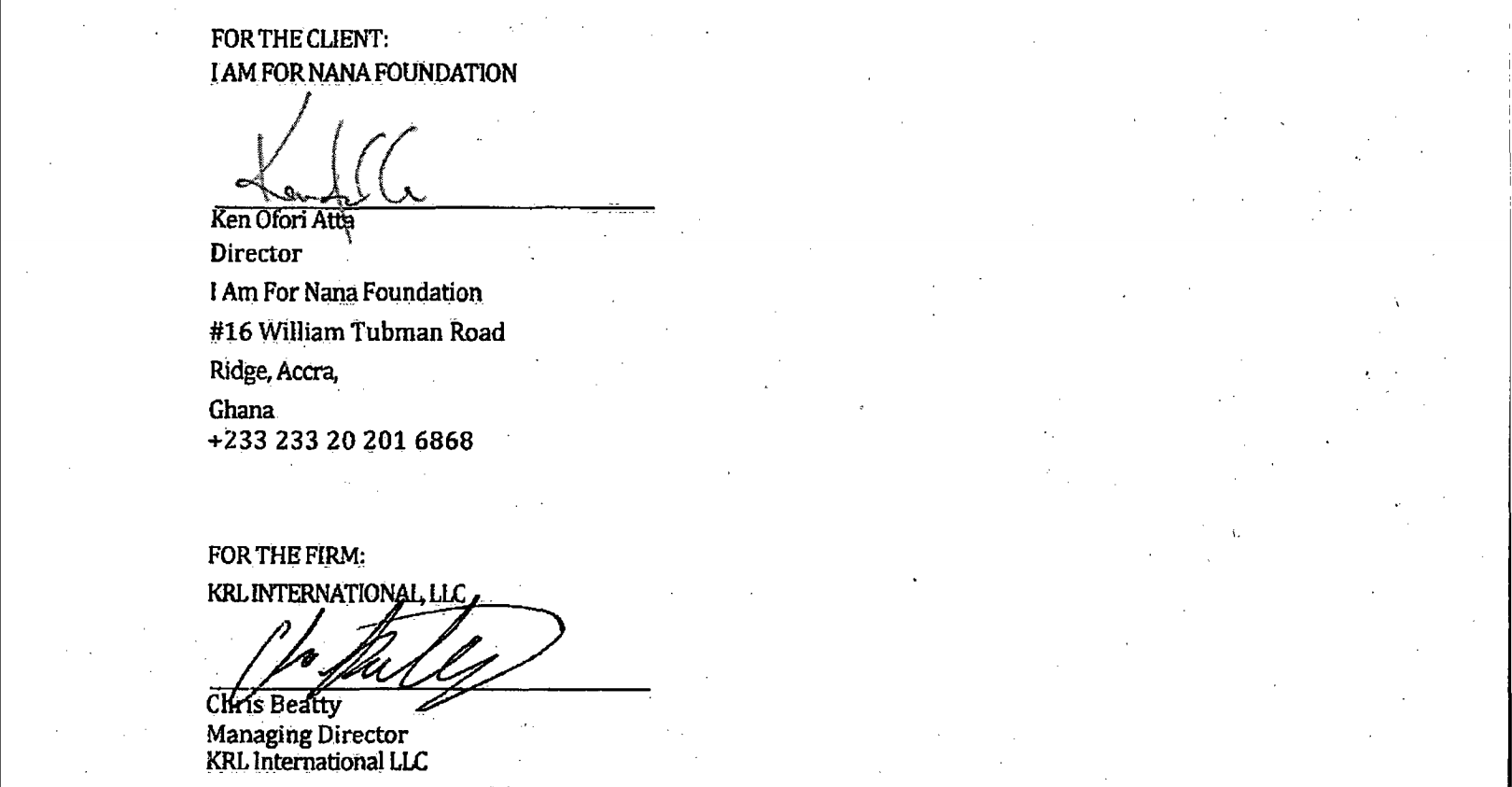 The breach of law: Contract extension with Office of the President-elect for Ghana

A contract extension was signed on February 27, 2017. The beneficiary (NPP) and purpose (supporting Nana Addo) remained the same. But the payments were no longer made by a private entity, I Am For Nana Foundation; they were now made by the Office of the President-elect for Ghana, using public funds. (see 5788-Amendment-20170228-7)

According to the Amendment filed by KRL with the US regulators, “original contract was with the election campaign foundation for Nana Akufo-Addo. He became the President-elect and is now the President of Ghana. This contract extension for this reporting period is between KRL International LLC and the Office of the President elect for Ghana”

Despite both Ghanaian and US laws, KRL International was providing services for a Ghanaian political party (New Patriotic Party), while being paid by Ghana’s Government.

On June 28, 2017, KRL International and the Government of Ghana, represented by the Ministry of Finance, entered into a new and different consultancy service contract. (see 5788-Exhibit-AB-20170705-21)

On August 30, 2017, KRL filed an Amendment “to clarify change in name of a KRL International LLC client”, suggesting that the replacement of I Am For Nana Foundation with the Office of the President-elect of Ghana had never happened.

Without mentioning the February 27, 2017 contract extension, KRL claimed that “once President Akufo-Addo took Office a new agreement was consumated between KRL International LLC and the Government of Ghana, Ministry of Finance on June 28, 2017. At that point in time – KRL said – the agreement between KRL International LLC and I Am For Nana Foundation was terminated, because the campaign effort no longer existed.” (see 5788-Amendment-20170830-10)

The cover-up went even further. In a statement filed with the US Department of Justice in August 2017, KRL International claimed that lobbying services provided by KRL in April 2017 were made on behalf of “the Ministry of Finance of the Republic of Ghana”. (see 5788-Supplemental-Statement-20170830-22)

This was an obvious false statement. The only contract in force in April 2017 was between KRL and the Office President-elect for Ghana. The agreement between KRL International and Ghana’s Ministry of Finance would not be signed until two months later, on June 28, 2017.