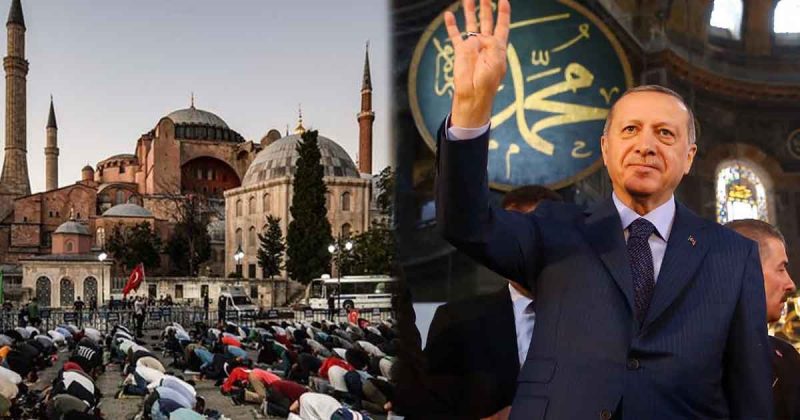 Most of the Christian world was shocked by the recent announcement made by President Recep Tayyip Erdogan of Turkey, who declared that the sixth century Hagia Sophia would become a mosque yet again. The decision, which was backed by a top Turkish court who revoked the 1934 decree by Mustafa Kemal Ataturk, the founder of the Turkish republic, signified the completion of Erdogan’s lifelong dreams to turn Turkey back to its Islamic roots.

The Hagia Sophia was built as a cathedral by the Byzantine Emperor Justinian in the sixth century, then it was converted into a mosque after Constantinople fell into the hands of the Ottoman leader, Mehmed II. The magnificent building remained a mosque until 1934, the year in which Mustafa Kemal Ataturk, the secular leader of Republican Turkey, decided to turn Hagia Sophia into a museum. Now, decades later, Hagia Sophia’s status as a museum has been shattered, and with it the spirit of the secular Kemalist regime as well.

This move, which was perfectly planned by Erdogan, signals the end of the secular Turkey that we all knew. By restoring the most famous site of worship to the Muslim faithful, Erdogan has essentially crowned himself the new Sultan, a move that also signifies the rejection of the Western values that the late Mustafa Kemal Ataturk held so dear. The steady reassertion of Turkey’s Islamic heritage has entered the final stages, and the entire world watches impotently how a country that was supposed to join the European Union a few years ago has now proclaimed its Islamic legacy.

“This is Hagia Sophia breaking away from its chains of captivity. It was the greatest dream of our youth; it was the yearning of our people and it has been accomplished.” – Erdogan said before the reopening.

Outside, in Sultanhmet Square, about 350.000 people joined the president in worship. Many had arrived on buses from all over the country, camping on the square overnight. All of them were eager to be a part of the historic occasion, and all of them were proud of what Erdogan had accomplished. When the Muslim prayers finally started, they all fell down on their knees, facing Mecca, and started praying.

In neighboring Greece, bells tolled and flags flew at half-mast, as hundreds of churches across the country held vigils, describing that Friday as a “day of mourning”. Russia’s Patriarch Kirill, the head of the largest Orthodox Church in the world, branded the move a “threat to the whole of Christian civilization”. Pope Francis, the head of the Catholic Church, declared that he was “thinking of St. Sophia” and was “deeply pained” by the move. But without any unity in-between the Christian faiths, the declarations were simply symbolic in nature.

The governments of the European Union and the United States muttered their regrets. UNESCO released a statement warning Turkish authorities against “taking any decision that might impact the universal value of the site”. Even some Turkish seculars, like the Nobel Prize-winning novelist Orhan Pamuk, said the following: “there are millions of secular Turks like me who are crying against this but their voices are not heard”.

“We understand the Turkish Government remains committed to maintaining access to the Hagia Sophia for all visitors and look forward to hearing its plans for continued stewardship of the Hagia Sophia to ensure it remains accessible without impediment for all”, US State Department spokeswoman Morgan Ortagus said in a statement.

But at what end?

For Erdogan, the decision to convert Hagia Sophia back into a mosque is purely political. The economy of Turkey has tanked due to the coronavirus pandemic, with tourism plummeting and hundreds of thousands of people being unemployed. This comes on top of a devaluation of the Turkish lira, who was struggled to stay afloat since the 2016 coup d’état. So, changing Hagia Sophia’s status appears to be Erdogan’s move to appeal to his base and to reassert his political brand – a strident nationalism that is heavily rooted into Islam.

But is this enough to secure Erdogan’s future amid a burgeoning economic crisis and a global pandemic? The move definitely appears to be designed to please his ruling Justice and Development party’s conservative voters, but there still are a lot of secular Turks that are dismayed by Erdogan’s recent attempts to put the final nail in the coffin of Turkish secularism. While leading opposition figures have for the most part refused to engage in this polarizing political issue, some have dared to express their distaste, such as Ekrem Imamoglu, the mayor of Istanbul and a member of Turkey’s largest opposition party.

“This is a world legacy, a magnificent work. What is the need to open this debate now, when 97 percent of tourism has frozen, while hotels are closed, while tourism has plummeted and hundreds of thousands of people have become unemployed? This is not on the agenda for Turkey. Is this our issue right now?” Mr. Imamoglu said.

As the Muslim prayers are herd once again at Hagia Sophia, so are the drums of war. The Western world needs to take a harsh diplomatic stand against Erdogan’s plans, or else it risks on allowing an Islamic dictatorship right at its doorsteps. The reclamation of Turkish sovereignty comes at a heavy price, especially now when the world needs more unity, not division.