Home
Elections
Cambridge Analytica – what comes after the end

Cambridge Analytica – what comes after the end 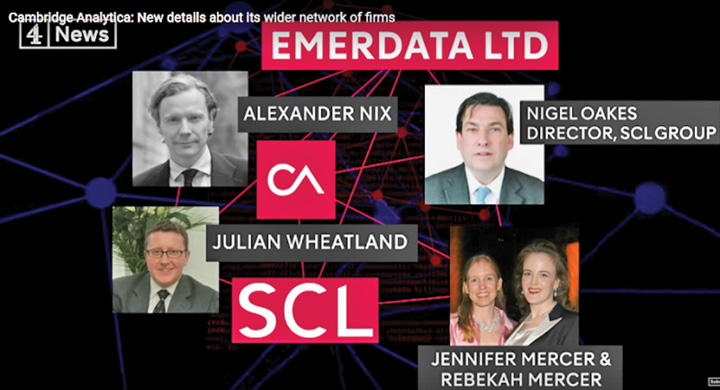 We all know about Cambridge Analytica, the UK-based firm that was involved in one of the biggest data mining scandals a couple of years ago, when the company was found to harvest data from more than 87 million Facebook users, for political campaign purposes. Open Source Investigation wrote several articles about them some time ago (here, here and here), back when they were one of the biggest players in the political game, having successfully influenced both the Brexit referendum and the US Presidential election that saw Donald Trump win. But where are they now?

Shortly after announcing an immediate shutdown and total liquidation of its business, Cambridge Analytica seemed to have completely disappeared from the spotlight. But alas, official documents indicate that those behind the controversial analytics company have since launched a new firm, Emerdata Limited, run by very much the same management and investors as Cambridge Analytica.

Jennifer and Rebekah Mercer, daughters of wealthy businessman Robert Mercer who created and bankrolled Cambridge Analytica, are now the directors of Emerdata, a firm that describes itself as a “data processing, hosting and related activities” organization. With them is also former Cambridge Analytica’s acting CEO and data wizard, Dr. Alexander Taylor, alongside several other high-profile former employees, such as Julian Wheatland, who is also a director within the SCL network of organizations. Another director within Emerdata is Chinese businessman Johnson Chun Shun Ko, who is also deputy chairman and executive director of Frontier Services Group, a private security firm which mostly operates in Africa, who is chaired by US businessman Erik Prince, founder of the controversial private military group Blackwater USA.

“I’m pretty sure nobody’s thinking of trying to start it [the firm] up again under a different guise”, Julian Wheatland said after being asked by Fast Company if there were plans to revive the companies.

Matt Oczkowski, former head of product at Cambridge Analytica, now works for the Trump campaign, helping oversee its data program. Oczkowski, who also worked for Trump back in 2016, has joined the reelection campaign this January. He will, more than likely, work on data-focused projects which will determine where Trump should campaign in person, using traditional data modeling rather than psychographics.

How did it happen?

After announcing its shutdown, Cambridge Analytica was shortly acquired by a holding company called Emerdata Limited. The company, who was incorporated in the U.K. in 2017 by former directors of Cambridge Analytica and prominent members of the Mercer family, acquired most of the SCL companies prior to their bankruptcies, with the purpose to bring them under a single ownership structure for the purpose of refinancing them.

Ever since purchasing the now defunct firm, Emerdata has bankrolled the SCL companies’ legal bills amid investigations and multi-billion dollar lawsuits on both sides of the Atlantic. Even so, despite owning most of the companies’ assets, Emerdata has issued several press releases that sought to clarify that the holding company does not have control of the sensitive data, which still remains under the control of the administrators overseeing the investigations.

“Emerdata did not acquire or retain any assets from the bankruptcy companies, and if Emerdata had known in advance that the companies were going bankrupt, would never have acquired them”, Julian Wheatland, director of Emerdata, wrote.

Emerdata purchased the entire share capital of SCL group for 13 million dollars. It currently owns 89.5% of Cambridge Analytica, based on the latest corporate fillings.

Ever since Alexander Nix, the former director of Cambridge Analytica, was secretly recorded by Channel 4 reporters saying that the firm had carried out illicit election campaigns all over the world, the company encountered big legal problems, both in the U.K and the U.S, where many organisations and private citizens took the matters into their own hands and decided to sue the British firm for access to the data compiled on them.

Despite all of this, it appears that Cambridge Analytica’s data secrets have been shielded from justice and exposure by court-appointed administrators, who, instead of working independently on behalf of all creditors, have been found to receive payments from a shadow company set up by a band of executives linked to the former SCL organizations. The administrators, Mark Newman and Vincent Green, were accused of trying to liquidate the company before a full investigation could be held by the authorities.

“With their legal fees funded by Emerdata, the administrators have treated this as hostile litigation […], making their lack of independence abundantly clear.”, said Andreas Glendhill, the lawyer representing one of the plaintiffs that sued Cambridge Analytica.

Cambridge Analytica repeatedly refused to hand the information over to the authorities until it entered administration last year.

Firms such as Cambridge Analytica, who specialize in data-collection and political advising, will always play a huge role in digital political campaigns. By targeting the most valorous, sought-after groups with data that is designed to sway their votes, these companies will always prove valuable for any 21st century political party. Unexpected turnouts, political miracles and never before seen comeback stories – these are the things all politicians want, providing that their pockets are full of money to pay for them.

But, as the previous investigations have shown us, some of these firms work in a very grey area, where political blackmail is employed, collected data is being used without the consent of the people, and where the outcome of a national election is decided not through classical voting, but through coercion, manipulation and unethical strategic targeting.

There are a lot of firms that work in the political advising field, who adhere to the rules of the game at all times. The problem is not with these firms, not at all. The problem lays with the companies that break the rules in order to win, doing whatever it takes – even if it crosses the illegal – to satisfy their customers. How many of them still operate to this day? How many Cambridge Analytica surrogates exist out there? We’ll find out …