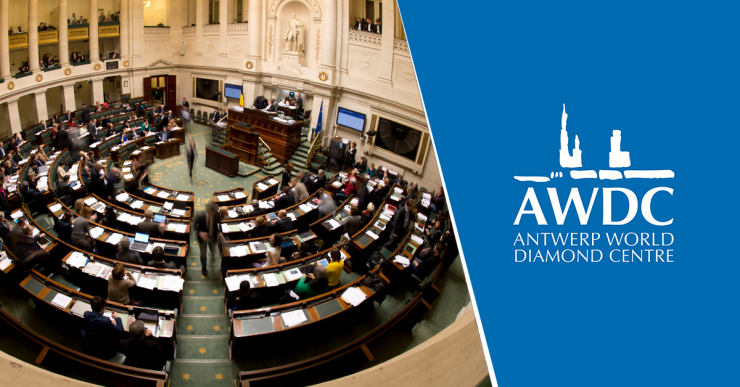 It has taken Belgian Parliamentary Inquiry Commission four months to discover the obvious: the enlargement of the criminal settlement law was drafted by the Antwerp diamond lobby in 2009. On 10 April 2017, Dirk Van der Maelen, the president of the commission, bragged in an interview: “We have now discovered in the inquiry that the Verherstraeten text is the same as the proposal which was tabled for the first time in an inter-cabinet working group of the government in 2009. And from that text we know the basis of it was written by lawyers for the AWDC. So the basis of the law in 2011 was the work of the advisors of the diamond industry.”

What the Parliamentary Commission hasn’t discovered yet is that the settlement law was endorsed by the Belgian politicians serving the interests of the diamond sector. Their main purpose was to settle the biggest fraud case in Belgium history: Omega Diamonds’ multi–billion money laundering scheme.

The mother of all frauds

On 15 October 2008, Belgian law enforcement officers conducted a search and seizure operation at the Omega Diamonds’ premises. The operation was part of an investigation started in 2006 when a former employee turned whistle-blower went to the US Embassy in Brussels and tipped off CIA and FBI to Omega Diamonds’ trans-national money laundering and tax fraud scheme.

The tax fraud was estimated to total between 2 and 3 billion euros. OSI has shown that Omega Diamonds, which had long held a monopoly on Angolan diamonds, had traded diamonds from Africa for years, avoiding taxes by transacting deals through Dubai then moving the profits back to Belgium.  http://www.opensourceinvestigations.com/ Omega Diamonds, a company established only in 1994, had become the second largest importer of rough diamonds in Antwerp, after De Beers. Omega officially realized a turnover of 700 million euros in 2006. The net profit was 40%.

Belgian authorities had confiscated diamonds from the Antwerp dealers before, but the raids at Omega Diamonds resulted in a record seizure of $150 million worth diamonds. Antwerp World Diamond Centre (AWDC), the umbrella organization representing and lobbying on behalf of the diamond traders, condemned the seizure in a press conference on 20 October 2008. “Omega Diamonds is an essential part of the Antwerp diamond trade, AWDC’s CEO said. The seizure could be fatal to the entire sector”. Calling for „realism and pragmatism,” and threatening with the relocation of the industry, AWDC publicly asked the law enforcement agencies to release the seized diamonds „before it is too late.”

AWDC CEO also publicly asked for political support: „We need the government support more than ever”. And Belgian politicians’ response was prompt and generous.

First, Minister of State Mark Eyskens (CD&V) a venerable politician, former Prime Minister, Minister of Foreign Affairs and Minister of Finance, was sent to Antwerp with a clear message: the political establishment supports the diamond traders. Eyskens joined AWDC’s CEO at the press conference, deploring “the diamond sector’s vulnerability” and accusing law enforcement of “damaging the reputation of the diamond industry”.

Then, in November 2008, Belgian Minister of Justice Jo Vandeurzen (CD&V) asked prosecutor general Yves Liegeois to work with the diamond lobby on resolving the Omega Diamonds scandal. Vandeurzen’s request was reinforced by her successor Stefaan de Clerck (CD&V). A series of meetings between the diamond lobby and Belgian authorities took place, most of them held in Antwerp. AWDC drafted a bill proposing the enlargement of the criminal settlement law, and provided an explanatory memorandum in support of the bill.

In 2009-2010, an inter-ministerial working group discussed the bill. But Belgium was in the middle of its longest government crisis. Although the bill had the full support of government officials like minister of Justice Stefaan de Clerck or Deputy Prime Minister and Minister for Finance Didier Reynders (MR), the federal government was weak and instable. So the diamond lobby turned to its friends in the federal Parliament.

A law for the benefit of our friends in Antwerp

When the Omega Diamonds scandal broke, it became clear that a diamond confiscation law was no longer enough and the bill was dropped in April 2010.

A few months later, in December 2010, the sponsors of the 2008 bill became members of a secretive group, “The Diamond Club”, in fact a parliamentary arm of the AWDC. Diamond Club’s goal was to push for the enlarged settlement law.  The president of the Club was Jan Jambon (NVA), and the vice-presidents were Willem-Frederik Schiltz (Open VLD) and Servais Verherstraeten (CD&V).  http://www.opensourceinvestigations.com/

On 24 February 2011, an amendment to the Code of Criminal Procedure was introduced in the Belgian Parliament. The amendment was introduced by the Diamond Club’s vice-president Servais Verherstraeten and co-sponsored by Sonja Beck (CD&V) and Raf Terwingen (CD&V). Adopted by a large majority, the bill became law on 14 April 2011. It became possible for companies and individuals suspected of tax evasion to enter into a settlement with the authorities.

On 6 May 2011, the same day in which the settlement law was published in the Belgian Official Gazette, Willem-Frederik Schiltz, vice-president of the Diamond Club, declared that the Antwerp diamond sector is “hyper-transparent”. Shiltz was visiting AWDC headquarters in Antwerp in a trip organized by the Diamond Club for a group of 20 MPs.  Willem-Frederik Schiltz is the son of Hugo Schlitz, a Flemish nationalist politician associated with the Antwerp diamond lobby.

How to close a multi-billion money laundering case

On 3 May 2013, Omega Diamonds sealed a deal with the Antwerp Prosecutor’s office and special Tax Inspection. The company agreed to pay a settlement of $218.7 million (EUR 160 million) to avoid being prosecuted for tax-evasion and money laundering. John Crombez (SP.A), secretary of state in charge of the fight against fraud, said he was happy a settlement had been reached in the Omega Diamonds case.

The settlement cleared Omega Diamonds of all charges. According to the diamond company’s lawyers, neither the executives, nor Omega “have admitted or been found guilty of any criminal wrongdoing, and the settlement with the Belgian authorities does not constitute any admission of criminal guilt.”

The 160 million euro deal was the largest settlement in the history of Belgium.

It was also a sum representing only 5 to 8 percent of the estimated tax fraud.