Home
Terrorism
The shades of war

The shades of war The recent events developing in Syria have yet again left the world in shock, reminding us that the drums of war have not gone silent yet. In order to understand what has transpired in the last couple of days, we first have to realize that the truth is somewhere in the middle, with both of the sides involved trying to undermine the other, by any means necessary.

What we know so far: around 50 people have been killed in a gas attack allegedly orchestrated by the Syrian Government in the town of Khan Sheikhun, according to the Syrian Observatory for Human Rights, a British-based organisation that monitors the civil war in Syria. The attack prompted the US to launch 59 Tomahawk missiles at a Syrian-held Airbase, marking the first international incident that the Trump administration is being held responsible for.

The alleged chemical attack was conducted via the use of sarin gas, a highly deadly chemical nerve agent that is easily absorbed by the human skin upon contact. However, the OPCW (Organisation for the Prohibition of Chemical Weapons) inspected Syria in 2013 and found that the Assad regime has removed all chemical weapons from its stock pile, whilst also reporting that ISIS and some FSA groups have obtained chemical WMD’s (Weapons of Mass Destruction) somehow. The fact that this attack was conducted on ISIS-held areas points to three possible scenarios: 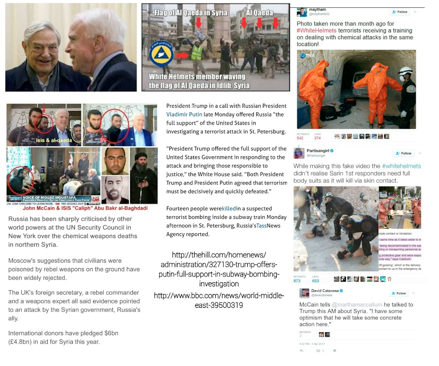 Now, let’s see the facts that makes everything more complicated: 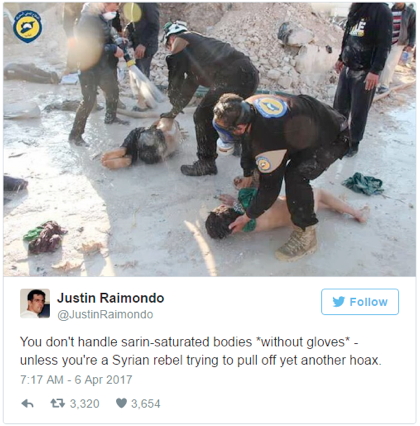 2. Feras Karam, a Syrian TV announcer based in rebel held areas, has stated on Twitter “Tomorrow starting, a media campaign to cover the density of air raids on rural Hama and the use of chlorine poison against the children” – 24 hours before the attack even occurred. 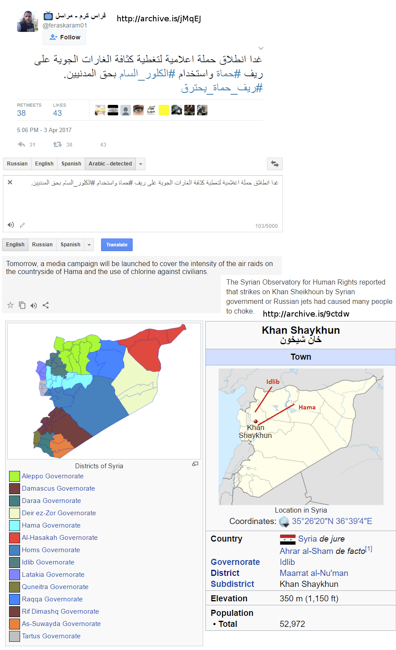 3. A Pakistani-British former doctor (medical license revoked), Shajul Islam, who is facing terrorist charges for kidnapping and torturing two British journalists in Syria, was seen giving interviews with the press on site, rather than helping the victims of the attack, even though he described himself as the lead doctor in treating all of the patients in Khan Sheikun.

While we have no definite proof in order to completely corroborate the real truth, something truly is fishy in this situation. Why would President Assad use chemical weapons against a remote location, when his situation in Syria was turning in his favour, from all sides? Why would the Russians allow him to use the chemical weapons, knowing full on that the response from the international community would escalate drastically? Who benefits most from all of this – the rebels on the ground, or the Assad regime?

This is not about defending the Al-Assad regime or the Russians, but rather to find out the real truth about this whole situation. In terms of warfare and geopolitics, this move, if done by them, is completely illogical. The US administration, via Secretary of State Rex Tillerson, have stated two weeks ago that Bashar Al-Assad would remain in charge of the Syrian Government, as he is an asset in the fight against ISIS. This paradigm has now completely changed, with the US administration citing the need for Assad to be completely removed from power – is this what Assad or the Russians want? Or is this what the radical Islamist rebel group wants?

The real truth is out there and it’s completely up to us to find it. As seen in 2013 as well, the Mainstream Media is yet again powering up the propaganda against the Russians and the Assad regime, with no definite proof that it was them behind the attack. Mind you, the only actual proofs that corroborates this story are the videos and photos taken by a terrorist organisation – the White Helmets – that have been circulating massively in the Western media outlets like wildfire in the last couple of days.

War is cruel and war is driven by emotions. And what better way to start a war than to use images and videos of young, innocent kids in harm’s way? 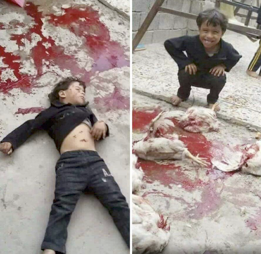 [A picture of a young boy, allegedly dead from the sarin gas attack, that has been circulating in the Western Media in the last couple of days – proven to be fake]