Kazakhgate: A Commission that fails to investigate relevant facts 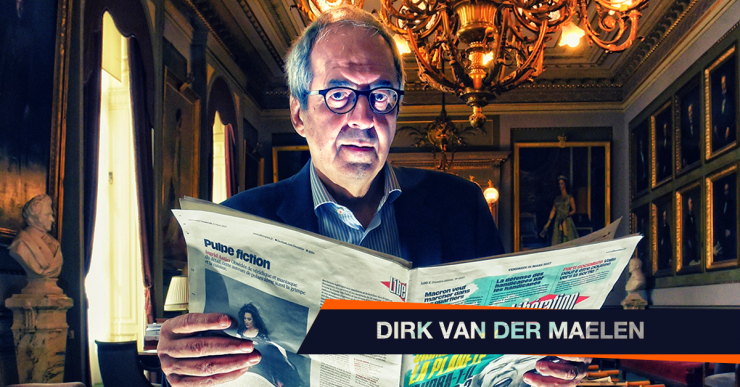 In a recent interview in the Belgian magazine HUMO, the president of the so-called Kazakhgate commission, Dirk Van der Maelen (sp.a), said that “the text we voted on March 2, 2011, was not from Carina Van Cauter. It was a copy of the bill of Servais Verherstraeten (CD&V). We have now discovered during the inquiry that Verherstraeten’s text is identical with a proposal drafted for the first time in an inter-cabinet working group in 2009. And from that text we know the basis of it was written by lawyers for the Antwerp World Diamond Center (AWDC). So the basis of the law in 2011 was the work of the advisors of the diamond industry.”

By “the text” he means the amendment that extended the scope of the criminal settlement in the Belgian Code of Criminal Procedure.

What Van der Maelen omits to say in the interview is that he didn’t found out in 2017 that the amendment was written by the lawyers lobbying for AWDC – he knew it all along. In March 2012, Van der Maelen declared for the same HUMO magazine that “As far as I know, it is the work of liberals and CD&V, based on a text written by the diamond lawyers Axel Haelterman and Raf Verstraeten. The extended amicable settlement is a project of the diamond traders.” (source: http://www.humo.be/)

So apparently Van der Maelen didn’t need to run a commission in 2017 to tell him what he already knew in 2011 – namely, that the extension of the amicable criminal settlement was the work of the powerful lobby of the diamond traders in Antwerp.

What Van der Maelen never says, and which is a lie by omission, is that in 2009 he was the vice-president of the parliamentary commission investigating the cases of big fiscal fraud in Belgium. This commission unanimously recommended to the Belgian parliament to establish a general amicable settlement and/or transaction system which, in its application, will put an end to criminal prosecution of fiscal frauds. (See here, recommendation no. 36, on page 243: http://www.dekamer.be/.)

In other words, Dirk Van der Maelen, the man who in 2017 runs a parliamentary commission aiming to investigate how the law on amicable criminal settlements ever came to being, is the same man who in 2009 was the vice-president of the parliamentary commission that unanimously recommended the introduction of the extended criminal settlement procedure. If this is not a gross conflict of interests, nothing is.

So the question is: why all these lies and fabrications? Why is the so-called Kazakhgate commission bound to ignore the truth?

Belgium, two countries in one

The so-called Kazakhgate commission was created at the request of two French-speaking opposition parties: the Greens (Ecolo), and the Left-Liberals (DéFI). Both these parties pushed hard for the establisment of this commission – for political reasons.

Ecolo needed this commission to get the center stage and win political points against its opponents: the Right-Liberals (Reformist Movement – MR), the Socialists (PS), and, most importantly, the Communists (PTB-Go).

Since 2014, the Communists became far more appealing for the French-speaking electorate than the Greens. Recent polls show them as the third most important party in the Walloon region (after the Socialists and the Right-Liberals), with the Greens lingering on the fifth place.

DéFI, on the other hand, is a very small party struggling to get some votes from the liberal electorate, who usually votes for the Right-Liberals (MR). To do so, it needs visibility – and the Kazahgate commission offers plenty of it.

It’s no wonder, then, that these two political parties were the ones who pushed hard for the commission to be established – and also the ones who have the most to lose if the whole affair proves to be nothing but hot air.

Why Kazakhgate and not Diamondgate?

The story of Kazakhgate, as it was circulated in the media, was perfect for Ecolo and DéFI. If true, it would have allowed them to put MR into a corner, since two of the most important Belgian political figures in this story – Didier Reynders and Armand De Decker – are top MR politicians.

We have Kazakhgate instead of Diamondgate simply because Ecolo and DéFI are French-speaking political parties with regional interests only. Diamonds are a Flemish affair that doesn’t bring them votes.

Unfortunately for Ecolo and DéFI, the story proved to be a fake from top to bottom, as OSI showed here: http://www.opensourceinvestigations.com/.

The fact that the enlarged transaction was drafted, introduced in the Belgian Parliament and voted by the lobby of the diamond traders in Antwerp moves the entire affair on Flemish territory. Therefore, it makes it politically irrelevant for the French-speaking electorate.

This is why Ecolo and especially his MP, Georges Gilkinet (the vice-president of the commission), are trying hard to obscure the truth and to create “alternative facts.” Gilkinet basically turned himself into a fake news machine regarding Kazakhgate. His Twitter page is full of strange, incoherent and utterly impossible facts and declarations, as if he’s desperately trying to create a parallel universe where all the unsubstantiated conspiracy theories that he produces might somehow be true.

Gilkinet is apparently the main source of information regarding the commission’s works leaked to the press, something that others members of the commission, especially those from the majority, find extremely objectionable. The Ecolo MP is so fond of his stunts that he came to endanger the very existence of the commission. The members of the Flemish parties in the commission recently threatened to dismantle it if Gilkinet continues with his dishonest practices.

However, the Flemish parties are quite happy with the fabrications of Gilkinet, as long as they are kept under control, because such fabrications keep the diamond lobby safe, away from public inquiry.

In other words, everybody in the commission is happy with the Kazakhgate fictions. The French-speaking parties in the opposition, mostly Ecolo and DéFI, hope to use it to win votes from the French-speaking electorate by posing as heroes. This is why every time the investigation moves towards the diamond lobby – a Flemish affair – they are trying hard to link it back to Chodiev and Sarkozy – to move it back on French-speaking territory.

On their part, the Flemish parties, especially those forming the majority, are also interested to move the story on the French-speaking territory, in order to avoid deeper investigations into the role of the diamond lobby. This is why, for instance, Dirk Van der Maelen supports Georges Gilkinet’s conspiracy theories.

The French-speaking parties and the Flemish ones have different interests. However, in this case they converge perfectly. This is why the Kazakhgate commission is bound to ignore the truth – and to keep ignoring it. The truth serves nobody’s political interests.