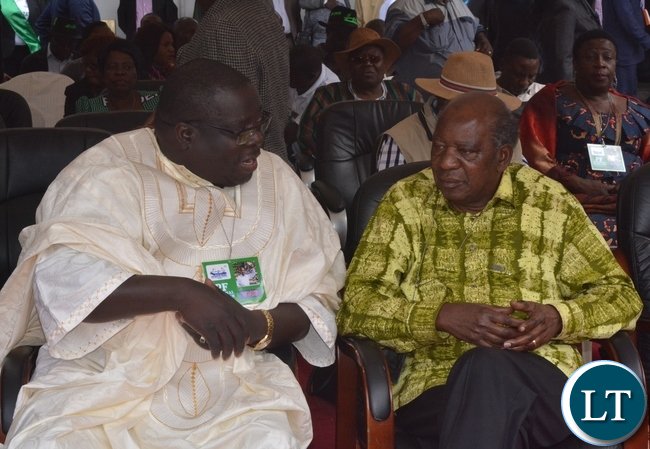 The Patriotic Front has expelled Chishimba Kambwili, but Zambia’s ruling party is far from pacified. Kambwili was one of PF’s top leaders and he still has powerful allies within the party. Kambwili has never been a lone wolf. When he started his campaign against President Edgar Lungu, using the FQM-ZCCM settlement as a pretext, Kambwili had the blessing of a PF patriarch, Alexander Chikwanda. Secret documents meant to fuel the anti-Lungu campaign were delivered to The Mast. The couriers that delivered the documents to M’membe’s newspaper were sent by Kambwili, but they were Chikwanda’s loyal soldiers. The documents came from Chikwanda.

The basis for the series of articles criticizing President Edgar Lungu’s call for an out-of-court settlement in the case against FQM published by the opposition media outlets was a secret letter hand-delivered to The Mast. As revealed by OSI, the letter was delivered by Kelvin Chishimba, a close friend of Chishimba Kambwili. http://www.opensourceinvestigations.com/  Kelvin Chishimba came to The Mast offices by car but did not get out of the vehicle. He gave the letter to the driver to give to Mutinta M’membe, Editor in Chief of The Mast and wife of Fred M’membe.

Both Kelvin Chishimba and the driver are Alexander Chikwanda’s loyal soldiers. Kelvin Chishimba is a nephew of Chikwanda. The driver of the vehicle which Chishimba used to deliver the letter was the official driver to Chikwanda when he was Minister of Finance.

In fact, before being used as a pretext for the coordinated attack against President Lungu, the letter went to Alexander Chikwanda.  It was the former Finance Minister who gave a copy of the letter to his long-time ally Chishimba Kambwili.

The “owners” of the Patriotic Front

For many years, Alexander Chikwanda and Chishimba Kambwili were part of the same league, the so-called “Northern circuit” or “genuine PF.” They had a great say in the affairs of the Patriotic Front and regarded themselves as the “owners” of the ruling party.

Both Chikwanda and Kambwili were appointed ministers by President Michael Sata in the first Patriotic Front Cabinet in 2011 and they managed to maintain their ministerial positions until 2016. In September 2016, President Lungu named Felix Mutati, leader of a faction of the opposition Movement for Multiparty Democracy (MMD) as the new Finance Minister, taking over from Alexander Chikwanda. One month later, Edgar Lungu fired Information Minister Chishimba Kambwili for corruption.

78-year-old Alexander Chikwanda was UNIP Administrative Secretary and served as Finance Minister in the socialist government of Kenneth Kaunda. He changed sides in the early 90s, becoming chief of staff of the new president, MMD’s Frederick Chiluba, and again in 2011, when he received the Finance portfolio in the Patriotic Front Government. President Lungu’s decision to remove him from the position of chief steward of Zambia’s economy threatened Chikwanda’s position of influence and power within the PF.

The much younger Kambwili, on his part, has always presented himself as a “founding member” of the Patriotic Front. Recently he hasn’t even bothered to cover his presidential ambitions.

Chikwanda and Kambwili have considered themselves crucial in Edgar Lungu’s emergence as party leader and presidential candidate in 2014. President Sata had resolved the issue of his succession before he died, appointing Edgar Lungu as PF secretary general in August 2014, and acting president of Zambia when he left country for medical treatment in October. However, a fight for power erupted with the Cartel-backed faction, comprising Guy Scott, Anthony Kasolo, Wynter Kabimba, or Mutembo Nchito, trying to remove Edgar Lungu from party leadership.

Although discreetly eyeing the PF presidency themselves, Alexander Chikwanda and Chishimba Kambwili positioned as Edgar Lungu’s supporters. President Lungu rewarded them with governmental positions, but both Chikwanda and Kambwili expected unconditional gratitude.

They thought they would be safe in pursuing their personal agenda even if it hurts their President.