Zimbabwe: The Obscenity of Dictatorship 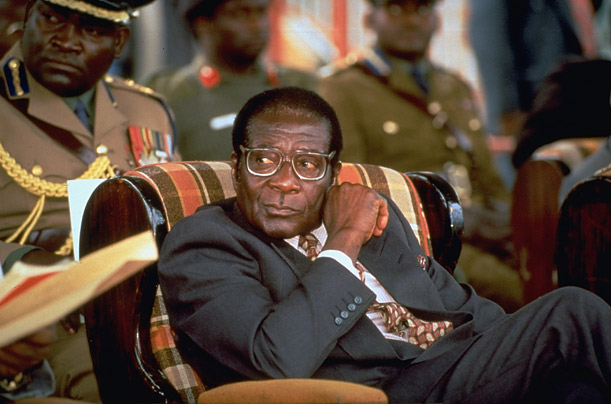 Lavish birthday celebration amid severe drought. Huge birthday cakes served to the presidential couple amid starvation fears. 92 years old Robert Mugabe, who has been ruling Zimbabwe with an iron fist for almost three decades, has no sense of decency.

… but Robert Mugabe seems immortal. The world’s oldest national leader, Robert Gabriel Mugabe, turned 92 on 21 February 2016. He has been ruling Zimbabwe since the 80s. The former rebel leader was elected Prime Minister in 1980, in Zimbabwe’s first and only democratic poll. In 1987, Mugabe was declared President by the Parliament, combining the roles of head of state, head of government, and commander-in-chief of the armed forces. He won his seventh term as President in 2013, in an election marred by violence and vote-rigging.

According to a diplomatic cable written in June 2008 by the US embassy in Harare (and released in 2011 by Wikileaks), Robert Mugabe was suffering from prostate cancer. The US embassy cited a high Zimbabwean official as saying the cancer had “metastasized and, according to doctors, will cause his death in three to five years“.

Eight years later, Mugabe is alive and well, one of the few Africans who manage to live past their sixtieth birthday. 85% of all the people in Africa in 2012 are below age 45 while only 5% of them are old persons aged 60 or more.  An African child who survived to age 15 in 2005-2010 is expected to live on average 49.8 years additional more years.

… but Robert Mugabe is obscene. In February 2016, the Zimbabwean president celebrated his ninety-second birthday. After a first ceremony held at the state house in Harare, Mugabe’s party, the Zimbabwe African National Union – Patriotic Front (ZANU–PF), hosted a lavish event in the city of Masvingo. The televised event cost $800,000. Schoolchildren read out poetry about the president. Supporters sang songs in Mugabe’s honour. Mugabe and his wife ate a cake in the shape of a map of the African continent while ninety-two balloons were released into the sky.

Masvingo is a town in south-eastern Zimbabwe, one of the worst-affected drought-stricken regions of the country. A month before the opulent celebration, the Zimbabwean government had requested $1.5 billion in aid from the U.N. World Food Program amid severe drought. On 5 February 2016, President Mugabe himself declared a “state of disaster” in the country’s rural areas, with 2.4 million Zimbabweans (more than a quarter of the population) in need of food aid.

Three-quarters of Zimbabwe’s population lives below the poverty line. Minimum wages start at $26 a month and the unemployment and underemployment rate is ninety-five per cent.

But, as the ZANU PF Youth League secretary said, celebrating President Robert Mugabe birthday is like celebrating Jesus Christ: „The birthday is important, it is like the birth of Jesus, who was born to rescue us, the same way President Mugabe was born in 1924 to free all of us”.

That’s the reason why one million US dollars are spent every year to celebrate Mugabe, amid severe drought, chronic food shortages and malnutrition.

President’s 2014 and 2015 celebrations also cost $1 million. In February 2015, at the event honouring Mugabe’s ninety-first birthday, the menu included dishes of young elephant, killed especially for the party. The president received a lion trophy and a crocodile trophy as gifts. Mugabe was honoured with seven birthday cakes. One was so large that it had to be carried in by eight men; another was the size of a mattress.

… but Robert Mugabe has no decency at all. In 1994, despite being the leader of a notorious autocratic regime, Mugabe was appointed an honorary Knight Grand Cross in the Order of the Bath by Queen Elizabeth II. (The honorary knighthood was annulled 14 years later).

In May 2012, Mugabe was appointed a UN “leader for tourism”. At that date the Zimbabwean President was subject to an EU travel ban, imposed over abuses linked to national elections, which prevented him from travelling to EU countries.

Mugabe was elected as the Chairperson of the African Union (AU) on 30 January 2015. He had previously led the AU’s predecessor, the Organisation of African Unity between 1997 and 1998. According to its own documents, „AU has undertaken an institutional obligation to ensure the effective guarantee of human rights in Africa in general”. Yet the Mugabe regime curtails freedoms of speech, assembly and movement and tortures dissidents.

In January 2015, an NGO called “Zero Tolerance on Corruption” announced that it will honour Robert Mugabe, the supreme leader of probably the most corrupt country in the world, with an award for his fight against corruption.

In October 2015, Zimbabwean President Robert Mugabe has been awarded Confucius Peace Prize, a Chinese rival to the Nobel Peace Prize. The laureate is the creator of a North Korean-trained security force, the Fifth Brigade, that dealt with the internal dissidents in the 80’s and the patron of the so-called Border Gezi militia, a youth militia that used abduction, attack, destruction and rape as political weapons in the 2000s.