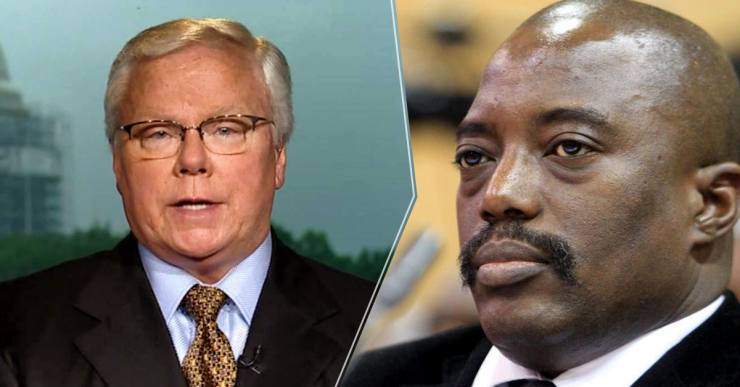 The Washington-based lobbying firm BGR has failed to deliver for Joseph Kabila. In September 2016, BGR and the Congolese government signed a contract worth $875,000. Ed Rogers, BGR founder and a Washington Post writer has been one of Donald Trump’s fiercest critics. Kabila’s lobbyist has called Trump stupid liar and racist, described him as a combination of Jim Jones and Kim Kardashian, accused him of being Putin’s friend. Rogers’ friends in media and politics are Kabila’s toughest critics. Kabila shouldn’t count on Rogers – Sessions friendship.

875,000 dollars from public funds to whitewash a brutal regime

In a desperate attempt to limit the damage caused by the US sanctions, Joseph Kabila’s regime hired the Washington-based lobbying firm BGR Government Affairs in September 2016. According to the US Department of Justice, the contract was signed on behalf of the Government of the Democratic Republic of Congo by Barnabe Kikaya, Kabila’s diplomatic senior advisor. BGR and the government of the DRC “have agreed to an initial fee of USD 875,000 for working through January 31, 2017”.

Joseph Kabila is a dictator and dictators use public funds to pay for PR campaigns to justify their atrocities. BGR Government Affairs is part of the BGR Group, one of the top lobbying firms in the US. BGR is frequently hired by autocrats to whitewash their brutal regimes. Kabila’s major problem is that BGR has failed to deliver.

BGR chairman and co-founder is Ed Rogers, a “Republican mega-lobbyist” and a Washington Post writer. But, in addition to being a lobbyist, a Republican strategist and a Post blogger, Ed Rogers has also been one of Donald Trump’s fiercest critics. And, unfortunately for Ed Rogers’ clients, Donald Trump has won the presidential election.

Ed Rogers has used his Washington Post blog and his authority as a Republican political consultant to carry out some of the most violent attacks against Donald Trump, his family, campaign staff and supporters.

Rogers called Trump stupid (“too much of what he says makes no sense”, “he can’t filter what he says, he blurts out lies, and conspiracy fester in his mind”). Rogers called Trump a liar, talking about “Trump’s willingness or downright eagerness to avoid the truth” and concluding that “it’s clear that in Trump’s World, you’re expected to lie”. Rogers called Trump and his Southern supporters racists (“there is a racist appeal to Trump’s candidacy”, “Trump was sending a direct signal to racist voters”).

Rogers described Trump’s family role in the campaign as a “traveling family roadshow” and expressed concerns about transforming the presidency into “a family enterprise”. Rogers described Trump as incapable of being Presidential (“Trump can’t deliver”; “Trump is too flawed to seize the moment”, “Trump should not be considered a viable candidate for president of the United States”). Rogers asked Trump to “hide for a couple of weeks” and called on Republicans to abandon Trump (“soon Republicans may have the choice of going down with the ship or trying to decouple from the Trump campaign”).

Putin’s friend, a combination of Jim Jones and Kim Kardashian

“Donald Trump is to politics what Kim Kardashian is to entertainment” – Rogers wrote on 24 August 2015, arguing that “having to articulate coherent policy proposals is a buzzkill for the Trump movement”.

On 14 June 2016, Rogers compared Trump with Jim Jones, the cult leader who led more than 900 followers in a mass suicide known as the Jonestown Massacre. (“Trump sounds like Jim Jones. Just add sunglasses and a little more slurred speech, and the similarities would be vivid”).

On July 27, Rogers accused Trump of being “Vladimir Putin’s friend”, and blamed him for “using Putin’s assets to spy on Trump critics”. In Rogers’ view “it is perfectly plausible Trump would turn to the Russians for information”. Kabila’s lobbyist imagined a “plausible and scary scenario” in which “one of Trump’s children goes to Moscow trying to raise capital or seal a deal and an extra envelope, containing the latest revelations that may be of interest to Dad back home, is handed over”. Rogers also accused Trump’s associates of “having ties to the Kremlin” and concluded that “there is enough evidence to suggest there is some collusion”.

Obviously his lobbyist’s anti-Trump campaign didn’t work in favour of Joseph Kabila. What about Ed Rogers’ media and political connections?

Washington Post was accused in the past of allowing opinion writer Ed Rogers to advocate for the positions and interests of his lobbying firm’s clients. But, at least for the DRC’s current crisis, Washington Post’s good reputation stands. The Post has accused Joseph Kabila of engineering artificial delays in the election process to extend his stay in power, asked him to step down and called on President Obama to “act on Congo before it’s too late”.

It is a fact that Rogers has used his Washington Post column to advocate for positions favoured by his energy and transportation clients. However he has never even mentioned Joseph Kabila or the DRC.

As for Ed Rogers’ Republican connections, OSI has already shown that prominent Republican congressmen have urged US President to “expand the scope of sanctions” and initiate “additional judicial investigations into kleptocratic activity by top DRC officials”. http://www.opensourceinvestigations.com

In fact, both Évariste Boshab and Kalev Mutond, who were added to the US Treasury blacklist on 12 December, were mentioned in the bipartisan Congressional letter sent to president Obama on 1 November.

Now Ed Rogers is telling Joseph Kabila not to worry because Trump’s nominee for US Attorney General Jeff Sessions is “an old friend” and will stop all ongoing investigations into Kabila’ s associates.

What the lobbyist doesn’t tell Kabila is that in his anti-Trump campaign he also thrashed “his friend” Jeff Sessions. Rogers has called Sessions a “Trump surrogate” willing to “go out and tell lies”, and to excuse “Trump’s poor gasp of civics and the dangerous attributes he would bring to the presidency”.

Kabila’s second mandate expires on 19 December. We already know for sure that he will remain in office beyond his Constitutional term. We also know for sure that 875,000 dollars have been wasted. No one in Washington supports Kabila. Not even his lobbyist.