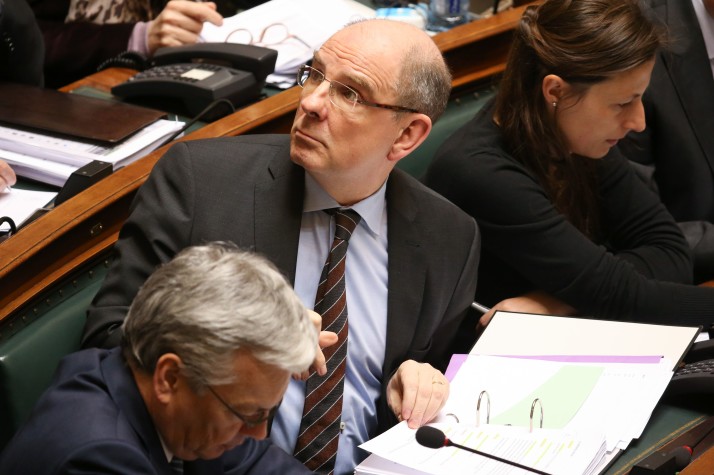 Eubelius, the largest law firm in Belgium, presents itself as the country’s lawmaker. Well, the advert is correct. Raf Verstraeten was a senior partner in Eubelius when he wrote and lobbied for the settlement law. He was still a Eubelius lawyer when he used the law for the benefit of his clients in the diamond sector. Both author and beneficiary of the settlement law, Raf Verstraeten was not the only one in a conflict of interest. The Omega Diamonds settlement was in fact an intra-Eubelius affair. In May 2013, the diamond company represented by a senior partner of Eubelius, Raf Verstraeten entered into a transaction with the Ministry of Finance led by Eubelius founder and senior partner, Koen Geens. In April 2014, the same Koen Geens proposed a special tax regime for the diamond traders. Geens’ proposal was an identical copy of a Masterplan issued by the AWDC in 2012. Appointed Minister of Justice in the Michel Government, Geens praised the results of the settlement law and announced a further extension of its application.

“Many of our partners serve as experts in drafting federal and regional legislation.” This is how Eubelius, the largest independent law firm in Belgium, with more than 130 lawyers, describes itself. According to Eubelius, the “regular involvement in legislative work” is one of the law firm’s key strengths. Clients should choose Eubelius to handle their legal matters because the law firm is “involved in the legislative process at an early stage,” which gives Eubelius’ lawyers “a head start when it comes to the implementation of new law”. 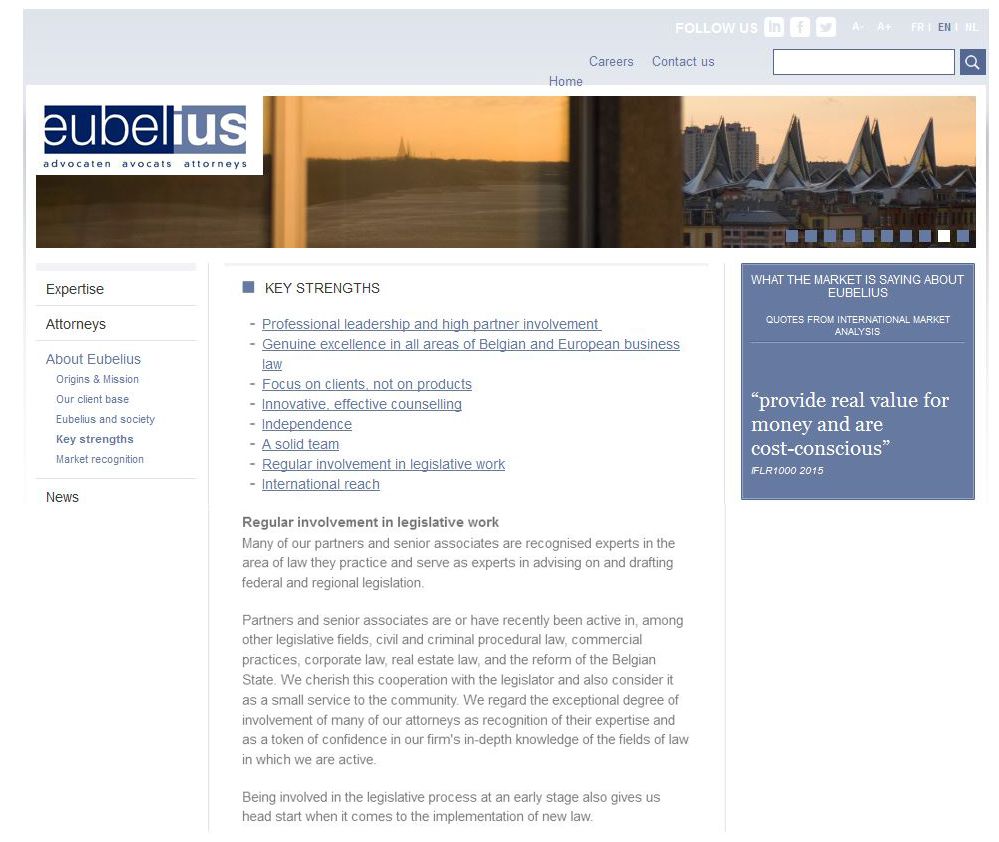 What Eubelius says in the advertisement is true, and the settlement law is the best example. Raf Verstraeten, Eubelius’ senior partner and head of criminal department, was definitely “involved in the legislative process at an early stage.” He drafted the settlement bill in 2008, negotiated it in 2008 and 2009, and lobbied for the law from 2009 to 2011. And that really gave him a head start when it came to the implementation of the new settlement law. Eubelius’ senior partner used the law he drafted for the benefit of his clients in the diamond sector, especially for Omega Diamonds.

“We were shocked to find out that Koen Geens was appointed Minister of Finance. He was the senior partner of Eubelius, one of our fiercest opponents” – Karel Anthonissen, a former director of the Special Tax Inspectorate, said in May 2015. Anthonnisen was referring to the appointment of Koen Geens (CD&V) as a member of Di Ruppo Cabinet on 5 March 2013 and the very special relationship between Eubelius and the Antwerp diamond traders.

For years, Eubelius, which was founded by Koen Geens in 1994, has been the diamond sector’s preferred law firm. While pushing for the settlement law, Eubelius senior partner Raf Verstraeten was also representing the Antwerp World Diamond Centre (AWDC) and countless diamond companies accused of fraud and investigated by the Special Tax Inspectorate.

But the Special Tax Inspectorate is a section of the Finance Ministry. By becoming Finance Minister, Koen Geens, the Eubelius founder, was also put in charge of tax inspectors – the very office that was prosecuting Eubelius’ clients. On 3 May 2013, two months after Koen Geens’ appointment in the Cabinet, Omega Diamonds, represented by Raf Verstraeten, entered into a 160 million euros settlement agreement, representing only 5 to 8 percent of the estimated tax fraud. http://www.opensourceinvestigations.com/   The deal was sealed with the Special Tax Inspectorate within the Koen Geens-led Ministry of Finance. Soon after that, the HSBC account case was also settled. Again, Eubelius partner Raf Verstraeten negotiated on behalf of the diamond traders with tax investigators supervised by Eubelius founder Koen Geens.

The settlement law was vital for the diamond sector, but it was not the only policy the AWDC wanted to change. When their lawyer Koen Geens became Minister of Finance, the diamond lobby seized the opportunity to reopen the discussion on a special tax regime for the diamond traders. In April 2014, minister Koen Geens proposed the so-called carat tax.

An identical copy of a Masterplan proposed in 2012 by the AWDC, Koen Geens’ proposition was immediately endorsed by the Diamond Club, the informal group of Belgian MPs that had pushed for the settlement bill in 2010 and 2011. http://www.opensourceinvestigations.com/ Jan Jambon, the president of the Diamond Club, enthusiastically backed the proposal, arguing that “the diamond sectors brings significant added value and we want to keep it in Flanders.” In April 2014, Jambon’s N-VA was an opposition party.

Two years later, with the full support of the Michel Government, the Belgian Parliament approved the special tax regime. The tax carat was applauded by the AWDC and the diamond traders. In the words of Omega Diamond CEO and Eubelius client Sylvain Goldberg: “New fiscal law (carat tax) is good for Belgium!” 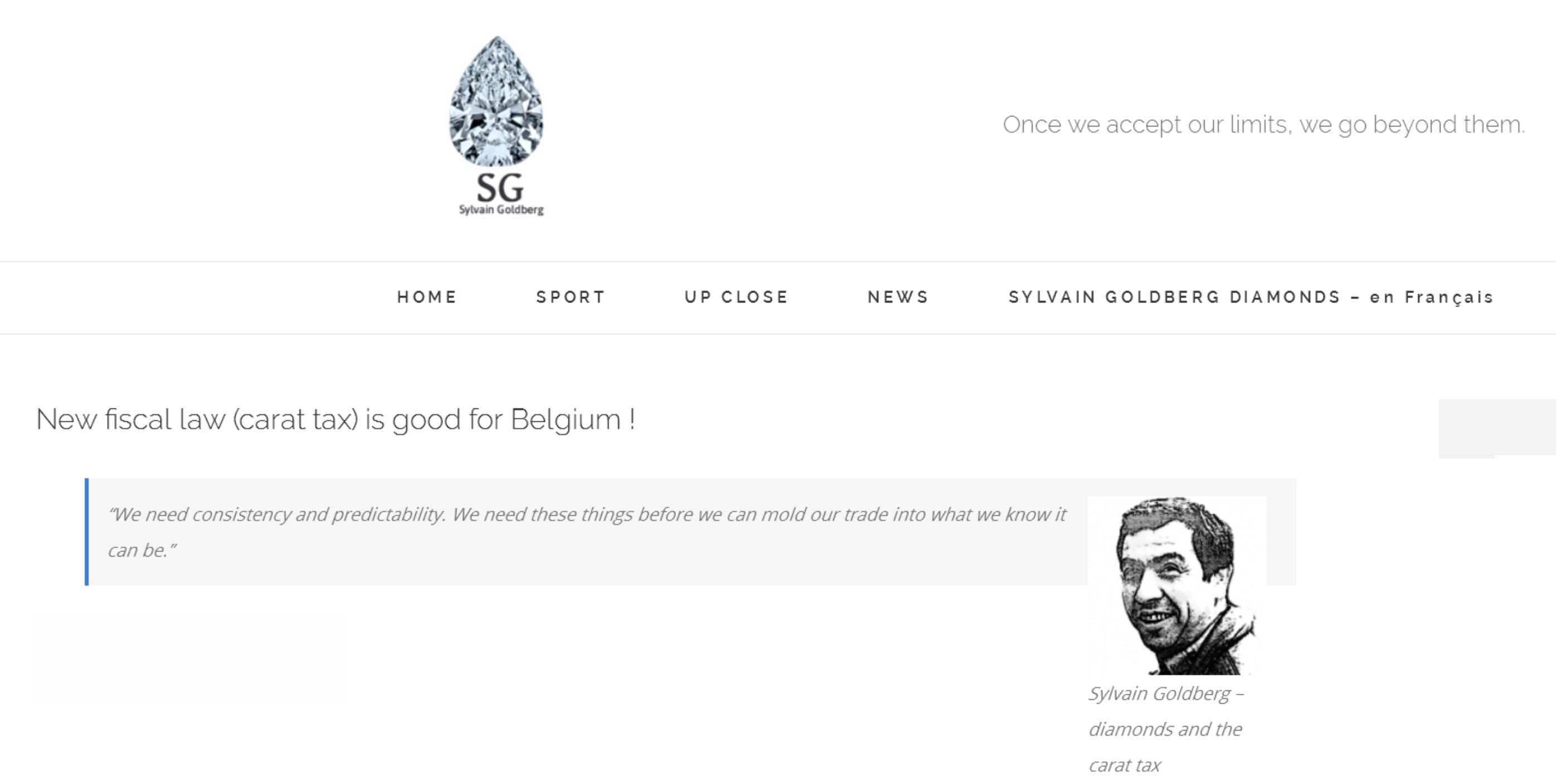 When his proposal for a special tax regime for diamond traders was passed by the Parliament, Koen Geens was no longer the Minister of Finance. By then he had become Minister of Justice in the new Michel Government. His first priority: to extend the already extended scope of criminal transactions. In March 2015, Minister of Justice Koen Geens, who had always been a strong supporter of the settlement law, proposed a “Justice Plan” meant to reform the Belgian civil and criminal procedure. Geens’ plan gave particular attention to the amicable transaction, underlying the “positive results of the settlement law,” declaring it a “practice in full expansion,” and announcing the government’s intention to “encourage its use” and further expand its application.

In March 2015, Koen Geens supported his justice plan in the Federal Parliament. He strongly argued that fraudsters should not be send to jail. “A fine is a better punishment for fraudsters,” minister Geens told the MPs, mentioning “other advantages,” such as avoiding lengthy procedures and releasing capacity for new cases.

Koen Geens was probably very surprised to find out from the Belgian media that the settlement law, the law written by his partner in Eubelius, was in fact the result of a global conspiracy, involving France, Kazakhstan, oligarchs and secrete services. But, like the majority of Belgian politicians, he chose to play along. The Eubelius founder became a critic of the settlement law. In April 2016, Minister of Justice Koen Geens announced that his cabinet made changes in the area of extended criminal proceedings, reducing the scope of the enlarged criminal transaction.