The Trivial Tricks Of Kazakhgate Commission 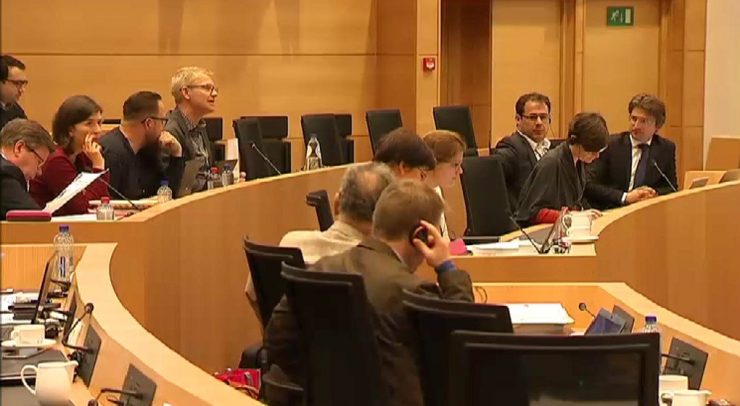 In the so-called Kazakhgate commission, Dirk Van der Maelen, the Flemish socialist (SP.A) president of the commission, and Georges Gilkinet, its Green (Ecolo) vice-president, are doing everything they can to turn the inquiry into a mockery, because of their own political agendas. At the same time, the big questions remain unanswered.

Rudy Volders, the collaborator of the former deputy-Prime Minister Didier Reynders’ cabinet, was brought back for a second time on Wednesday, 14 June 2017, to clarify who he had spoken to from the French-speaking liberals (MR) at the Senate, following the hearing on 24 May 2017, when former MR Senator Grégory Matgen stated that Volders called him to express the urgency of the enlarged criminal transaction being passed through the Senate. Volders repeated several times that he could not remember who he had spoken to and that he did not recall making a phone call to Grégory Matgen. He stated that the Finance Ministry had applied a macro-calculation and estimated that the enlarged transaction would bring 50 million euros to the Belgian state.

Van der Maelen explained to Volders that Zakia Khattabi (Co-Chair of Ecolo) declared during her hearing that Christine Defraigne (MR Senator) told her that she had a lunch at the cabinet and that she had her law proposal ready. David Clarinval (MR) took the opportunity to clarify that Defraigne stated in the press that there never was a lunch, and that Khattabi must have been mistaken – and then went on to attack Ecolo, saying that if he behaved like other members of the commission he would “bring back” Khattabi for questioning.

Georges Gilkinet (Ecolo) then replied that they should probably bring back Defraigne for questioning, highlighting how interested he is in dragging out the commission, to the extent of forcing an irrelevant debate over whether a lunch meeting took place or not.

The amount of time being wasted was again apparent during the hearing of Inge Claes, former substitute of the King’s prosecutor. While her name appeared in the documents regarding the Société Générale case, she actually had very little involvement in the case overall. Sonia Becq, the Flemish Christian-Democrat (CD&V) MP, previously suggested to the commission’s president that all questions should be sent first in writing to witnesses from the civil service, in order to verify whether it was necessary to bring them in. Nevertheless, the commissioners decided otherwise, and Inge Claes was brought in front of the inquiry commission.

A political agenda full of lies

In 2009, Van der Maelen was the vice-president of the parliamentary commission investigating the cases of big fiscal fraud in Belgium. This commission unanimously recommended to the Belgian parliament to establish a general amicable settlement and/or transaction system which, in its application, will put an end to criminal prosecution of fiscal frauds.

In other words, Dirk Van der Maelen, the man who in 2017 runs a parliamentary commission aiming to investigate how the law on amicable criminal settlements ever came to being, is the same man who in 2009 was the vice-president of the parliamentary commission that unanimously recommended the introduction of the extended criminal settlement procedure.

In 2012, it was already hard not to know who was behind all this. On 16 January 2012, the Antwerp World Diamond Centre (AWDC), an umbrella foundation representing the interests of the diamond traders in Belgium, issued a public statement in which the foundation recognized its role and congratulated itself for its “substantial contribution in the creation of new legislation extending the possibilities to conclude an amicable settlement.” In other words, they publicly bragged about them being the ones who changed the law – or, more precisely, being the ones who made the law.

Today, as president of the so-called Kazakhgate commission, Van der Maelen has to obscure the fact that in 2009 he voted for the introduction of the extended criminal settlement procedure, and that in 2011 he knew who was behind the extension of the criminal settlement. Otherwise, he would put the focus on him, and on his conflict of interest. This is why he is now playing the fool.

His strategy suits Gilkinet – who, on his part, has a very strong political reason to attack the French-speaking liberals from MR and to try his best to keep the entire investigation focused solely on MR.

The story of Kazakhgate, as it was circulated in the media, was perfect for Ecolo and Gilkinet. If true, it would have allowed them to put MR into a corner, since two of the most important Belgian political figures in this story – Didier Reynders and Armand De Decker – are top MR politicians.

All this makes Van der Maelen and Gilkinet best suited to ruin the inquiry commission – and, because of their separate but convergent agendas, they are doing a great job in turning this commission into a mockery. The fact that they run the commission as president and vice-president help them a lot.

No matter how hard Van der Maelen and Gilkinet are trying to force the commission to focus solely on Patokh Chodiev, the Uzbek oligarch with Belgian nationality, and on MR, the truth blows in their faces.

First of all, it was not MR, but CD&V that in 2011 pushed for the extension of the criminal transaction. On 13 December 2010, Servais Verherstraeten, together with two other CD&V MPs, Sonja Becq and Raf Terwingen, drafted a law proposal aiming to expand the scope of the criminal transaction. The draft was introduced as a law proposal to the Belgian Chamber of Representatives on 24 February 2011. However, a few days later, on 2 March 2011, it was transformed into Amendment 18 to the Law on Miscellaneous Provisions.

This happened because, in the meantime, the Flemish Christian-Democrats have secured the support of the socialists (PS) on the extension of the criminal transaction. This is why the Amendment 18, although identical with the proposal drafted by Servais Verherstraeten, Sonja Becq and Raf Terwingen, was signed by MPs from all the political parties forming the majority back then. (See here for more details: http://www.opensourceinvestigations.com)

There is no connection whatsoever between Chodiev and CD&V. There is also no connection whatsoever between Chodiev and the diamond lobby that created and pushed for the law on extended amicable settlements. Gilkinet tried hard to create such a connection, promoting the idea that a lawyer, Raf Verstraeten, worked both for Chodiev and for the diamond traders, but he failed miserably. When questioned by the commission, Verstraeten stated that he ended his relationship with Chodiev in 2008, long before the discussion on extending the criminal transaction even began.

More than that, there is no connection whatsoever between Chodiev’s lawyers back then – Catherine Degoule and Armand De Decker – and CD&V or the diamond lobby. Given the fact that De Decker was a top MR politician, Gilkinet is trying hard to convince people that it was MR, not CD&V, that pushed for the extension of the criminal transaction. So far, no hard evidence emerged to support his conspiracy theories. On the contrary, everything points to CD&V and its connections with the diamond lobby.

The commission also finally admitted what OSI has already proved: that Chodiev’s was not the first amicable settlement according to the new law. From what we know so far, the first such settlement was offered to Société Générale. By the way, there is a connection between Société Générale and the diamond traders: Christian Nys, the Antwerp prosecutor who treated favorably both the French bank and the diamond traders. As expected, the inquiry commission doesn’t have the time to investigate this connection.

Finally, there is no connection whatsoever between Chodiev and the Belgian law firm Eubelius. Raf Verstraeten was a senior partner in Eubelius when he wrote and lobbied for the settlement law. He was still a Eubelius lawyer when he used the law for the benefit of his clients in the diamond sector. Both author and beneficiary of the settlement law, Verstraeten was not the only one in a conflict of interest. The Omega Diamonds settlement was, in fact, an intra-Eubelius affair. In May 2013, the diamond company, represented by a senior partner of Eubelius, Raf Verstraeten, entered into a transaction with the Ministry of Finance led by Eubelius founder and senior partner, Koen Geens. (See here for more details: http://www.opensourceinvestigations.com)

Today, Koen Geens is the Minister of Justice. He wasn’t even once summoned by the inquiry commission, yet Georges Gilkinet finds both the time and the interest to summon people repeatedly in order to find out whether a meeting over a lunch took place or not.

To sum it up: no real investigation on CD&V; no real investigation on the “Diamond Club,” an informal and secretive group aimed to offer parliamentarian support to the diamond traders in Antwerp – the club’s aim was to put the interests of the Antwerp World Diamond Centre at the very heart of the Belgian Parliament (see here for more details: http://www.opensourceinvestigations.com); no real connection proven between Chodiev and the true power-players of the Belgian establishment. And yet Van der Maelen and Gilkinet are still being taken seriously.