The Kazakhgate Relay: From Bulat Utemuratov to Mukhtar Ablyazov 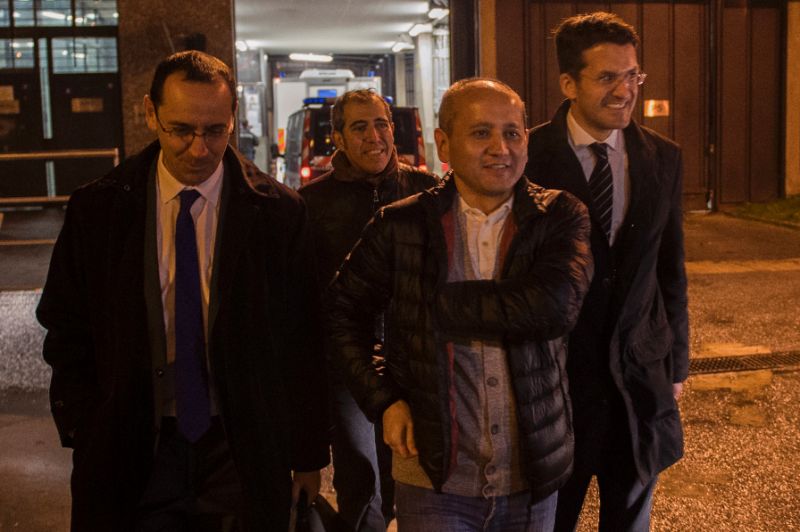 Who is behind the Kazakhgate scandal in the Belgian media? OSI revealed one name so far: that of the Kazakh oligarch Bulat Utemuratov, who orchestrated it in late 1990s and early 2000s. (http://www.opensourceinvestigations.com/belgium/propaganda-works-first-kazakhgate/)

Another character closely linked to Utemuratov is Mukhtar Ablyazov, a Kazakh oligarch too, and a fugitive from justice who is currently living in France.

The French newsletter Intelligence Online recently suggested that some members of the so-called “Kazakhgate” commission are interested in talking to Ablyazov. (see here: https://www.intelligenceonline.com/corporate-intelligence/2017/08/23/ablyazov-s-secret-lobbying-against-chodiev,108258465-ART)

If so, this means the commission is ready to take sides, knowingly or not, in a war between two groups of Kazakh oligarchs – a war that began decades ago.

Who is Mukhtar Ablyazov?

Ablyazov, born and bred in Kazakhstan, became truly rich in 2005, when he became the owner and chairman of the board of directors of Kazakhstan’s largest bank, BTA. In December 2004, the former owner of BTA, Yerzhan Tatishev, died in a controversial hunting accident, being shot (allegedly by mistake) by a former gangster (see here: http://kazworld.info/?p=9486). Ablyazov then forced Tatishev’s widow to sell him the share package that made him the sole owner of BTA (see here: http://kazworld.info/?p=28543).

After gaining ownership of BTA, Ablyazov began creating a network of offshore companies through which he managed to siphon billions of dollars from the bank. The Kazakh government discovered the scheme in 2009, when it nationalized BTA. According to Kazakh prosecutors, Ablyazov managed to steal 7.5 billion dollars using his network of dummy corporations.

Because of the judicial inquiry that began in 2009, Ablyazov fled Kazakhstan to UK. In August 2009, BTA Bank launched the first of its 11 civil proceedings against Ablyazov in the UK High Court.

In 2011, the United Kingdom granted Ablyazov political asylum for the period of trial proceedings.

In 2012, the High Court in London has ruled that BTA Bank is entitled to recover 2 billion dollars in assets from Ablyazov and his associates. (https://www.ft.com/content/fa197eae-909a-11e2-a456-00144feabdc0)  Later, the same court ordered Ablyazov’s associates to pay an additional 1.5 billion dollars to BTA. (https://en.tengrinews.kz/crime/London-court-orders-Ablyazovs-accomplices-to-pay-over-15-17955/)

In the meantime, in early 2012 the London court sentenced Ablyazov to 22 months in jail for “serious” and “brazen” contempt of court in trying to hide more than 34 million pounds of assets from his BTA creditors. (https://www.theguardian.com/business/2012/feb/16/arrest-warrant-kazakh-billionaire-mukhtar-ablyazov)

Facing jail in UK, Ablyazov fled to France using a passport issued by the Central African Republic. In July 2013 he was located and arrested by the French authorities (https://www.euromoney.com/article/b12kjzckjgvs22/the-hunt-for-mukhtar-ablyazov-banker-criminal-fugitive-victim).

In 2014, a French court order allowed the French authorities to extradite Ablyazov to Russia, where he was charged with the same crimes he was charged in Kazakhstan, since BTA also had branches in Russia and Ukraine. However, in December 2016 the French State Council overruled the order and released Ablyazov from custody. (http://www.reuters.com/article/us-apps-putin-commentary-idUSKCN1B91WN)

To sum it up, Mukhtar Ablyazov is an oligarch who committed fraud on a very large scale. He was repeatedly convicted by a British court – he was even sentenced to jail for contempt of court. All this happened in the UK, where the standards of justice are very high.

According to Professor Sebastien Peyrouse from George Washington University, who wrote an extensive study on the neopatrimonial regime in Kazakhstan, since the 1990s, two circles of senior officials have been in competition with one another as the representatives of differing, sometimes contradictory interests. One circle is led by Bulat Utemuratov; the other one comprises, among others, Chodiev, Ibragimov and Mashkevich.

“The competition between these two networks is structured around the mining sector. Utemuratov’s relations in this sector rival those of Mashkevich, whose ENRC also works in African markets, the stomping grounds of Glencore […]. In publicly formulating this competition, Utemuratov played the card of Kazakh nationalism, and hoped to assemble under his leadership Kazakh oligarchs opposed to the predominant role of non-Kazakhs. This alliance included Mukhtar Ablyazov before he fell into disgrace—whereupon Utemuratov then bought out much of his business and communications empire […].” (see here, p. 365=366: https://www2.gwu.edu/~ieresgwu/assets/docs/demokratizatsiya%20archive/GWASHU_DEMO_20_4/115R0286T7381151/115R0286T7381151.pdf)

In other words, Ablyazov is Utemuratov’s pupil and, to some extent, his protégé. After all, when Ablyazov fled from Kazakhstan, it was Utemuratov who bought his businesses, presumably to keep them safe from competition.

Both Ablyazov and Utemuratov belong to the ultra-nationalist camp of Kazakh oligarchs, in direct conflict with the likes of Chodiev, Ibragimov and Mashkevich, who, as non-Kazakhs, are treated as foes, not only as business competitors.

Ablyazov’s grudge against the Chodiev, Ibragimov and Mashkevich is manifest. On May 17 2017, for instance, he shared on his Facebook page a post by Aydos Sadykov: “Khromtau is a small town in the Aktobe region. In the 90s it was privatized by Mashkevich, Chodiev and Ibragimov. The so-called “Eurasian group” bought from the state the only chrome mines in the country. In the entire post-Soviet space, chrome was mined only in two places: in Khromtau and Petrozavodsk (Karelia, Russia). Since then, Kazchrome belongs to the citizens of Israel, Belgium and Uzbekistan.” [Chodiev and Ibragimov are Uzbeks, and they also hold Belgian nationality; Mashkevitch holds Israeli nationality.]

To this, Ablyazov adds: “I would like to add that all these enterprises got these owners free of charge back in the mid-1990s. Why? Because their business partner and co-owner is President Nursultan Nazarbayev.

You will find nowhere the information that this group will pay hundreds of millions of dollars for these assets in the country’s budget. It’s just an enterprise stolen from the country.

On these assets, manipulating the shares of these enterprises, using their official position, Nazarbayev and Co. stole billions of dollars from the National Fund. And they pay pennies for workers at these enterprises.”

Ablyazov’s Facebook post post has an unmistakably populist and nationalistic tone: Chodiev, Ibragimov and Mashkevitch are foreigners – Uzbeks, Belgians and Israeli – not Kazakhstani natives. They don’t deserve to own Kazakhstani properties that they “stole” from the Kazakh people and for which they pay nothing. In addition, they exploit poor Kazakhstani workers. This is quasi-fascist propaganda.

Ablyazov’s far-right views are also manifest from the way he spends his money. He financed, for instance, the activity of Dmitriy Demushkin, a Russian extremist recently convicted for 2.5 years for allegedly attending a party to celebrate Adolf Hitler’s birthday. Demushkin is the head of the supreme national council of the Russkie association, the chairman of the organizing committee of the nationalist party, and the chairman of the now-banned “Slavic Union”. (http://www.ibtimes.com/russian-nationalist-demushkin-granted-rally-permit-moscow-government-1892943)

Ablyazov was also strongly connected to Alexander Potkin, who allegedly handled the assets belonging to Ablyazov in Russia. Potkin is a well-known Russian nationalist, and the former leader of the Movement Against Illegal Immigration (DPNI). (https://en.tengrinews.kz/crime/Russian-nationalist-arrested-over-Ablyazov-embezzlement-case-256927/)

Apparently, Ablyazov also financed inter-ethnic clashes in south Kyrgyzstan in 2010, when in just two days about half a million ethnic Uzbeks became refugees. He allegedly financed those who urged the Kyrgyz to kill their neighbors of a different nationality. (http://www.silkroadgazette.com/ablyazov-attempted-to-destabilize-situation-in-russia-uzbekistan-and-kyrgyzstan/)

There is a clear connection between Ablyazov and Utemuratov, the man who masterminded the first Kazakhgate scandal in the late 1990s. Utemuratov’s team – Eric Van de Weghe and Le Soir’s journalist Alain Lallemand – is still active.

There is also ample evidence that Ablyazov hates Chodiev, Ibragimov and Mashkevich not only because they are his and Utemuratov’s business competitors in Kazakhstan, but, more importantly, because Ablyazov holds strong far-right beliefs. He simply hates them because they are not Kazakhs, but Uzbeks and Israelis. In his mind, they are sub-humans who deserve the same fate that Uzbeks had in Kyrgyzstan in 2010.

If the information provided by Intelligence Online is correct, it seems we now have a Belgian parliamentary commission who is ready, knowingly or not, to fight openly for the interests of the worst kind of Kazakh oligarchs – those who combine fraudulent economic power with a quasi-fascist ideology.