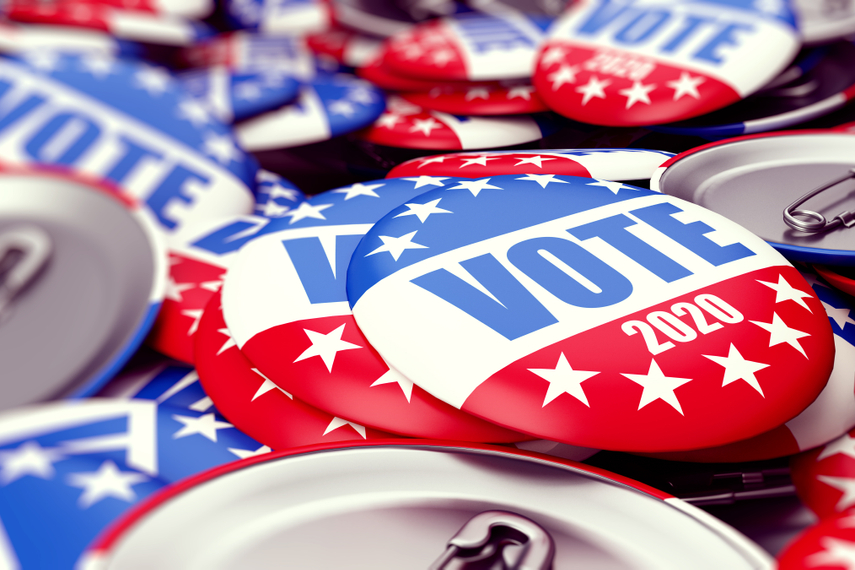 At least since 1976, a majority among white voters continuously and constantly supported the Republican candidate in the US presidential elections, no matter who that candidate was.

This majority varied from as low as 52% in 1976 to as high as 66% in 1984. The only exception is in 1992, when only a plurality (41%) of whites supported George Bush Sr. (compared to 39% who supported Bill Clinton). This only happened though because that year 21% of whites supported Ross Perot – a level of support for a third-party candidate never seen before (or after).

For 2020, data predicts a similar majority in support of Donald Trump. A mid-May CNN-SSRS poll found out that 55% of whites will vote for Trump (see here: http://cdn.cnn.com/cnn/2020/images/05/13/rel5c.-.2020.pdf). A late-May The Economist/YouGov poll turns this majority into a plurality: according to this poll, 49% of whites will vote for Donald Trump this November, compared to 39% who will vote for Joe Biden (see here: https://docs.cdn.yougov.com/5fsvmrvvhh/econTabReport.pdf).

The data shows that for the last 44 years, a significant majority of at least 55% of white voters supports the Republican candidate, either alone or in combination with another third-party conservative candidate. This suggests that a majority among white American voters was and continues to be conservative or conservative-leaning.

Apart from being conservative or conservative-leaning, this majority is overwhelmingly religious. According to an October 2019 poll from Pew Research Center, 81% of the whites who identify themselves as Republican or Republican-leaning also identify themselves as being Christian. (See here: https://www.pewforum.org/2019/10/17/in-u-s-decline-of-christianity-continues-at-rapid-pace/)

This suggests that within the white majority – already conservative or conservative-leaning and highly religious – the influence of White Evangelicals grew larger by the time and has now become dominant.

However, nothing in the data presented above explains the switch, within the conservative majority among the white voters, from the Reagan, Bush Sr. and Bush Jr. versions of conservatism to the Donald Trump version of conservatism – which is highly authoritarian, almost openly racist, isolationist and fundamentalist (in religious terms).

This switch becomes easily understandable once we look at the demographic data. In 1976, whites comprised 89% of the American electorate. In 2016 the percentage decreased to 70%, and in 2019 it decreased even further to 69%.

The conservative majority within the white electorate (estimated moderately at 55% of the white electorate) witnessed the continuous erosion of the once taken for granted white privilege to control the machinery of the American Republic. In 1976, this majority represented almost 49% of the US electorate. In 2016 it represented only 39%, and in 2019 a little less than 38%.

Could the loss of privilege – or at least the fear of loss of privilege – explain the tendency of the white conservative electorate to switch towards authoritarianism, isolationism, open racism, white supremacist ideas and religious fundamentalism? Is this the last (and ugly) stand of a once heavily privileged group, an attempt to freeze an unstoppable process and a sign of desperation (coming from the knowledge that this attempt is futile in the long run)? The way US politics have worked like in the past decade does not help either, and both parties should reset how they approach doing business if they want radicalism to disappear from the forefront of the political discourse.

This fight, which started in 2008, when the first signs that conservative whites are moving into a new direction appeared, will not end with Donald Trump. It’s to be predicted that it will become even more violent, authoritarian and racist, especially if the major parties in the US will not find a way to completely reject the temptations of political extremism.

The whole situation makes one ask the following: are white Americans the biggest threat to the American democracy, given that the conservative majority within the white electorate is becoming increasingly radicalized, or is the emergence of identity politics on both sides of the political spectrum the biggest issue here? The way the majority will react to what is happening right now in America will become one of the most important problem for the future of a multicultural America.