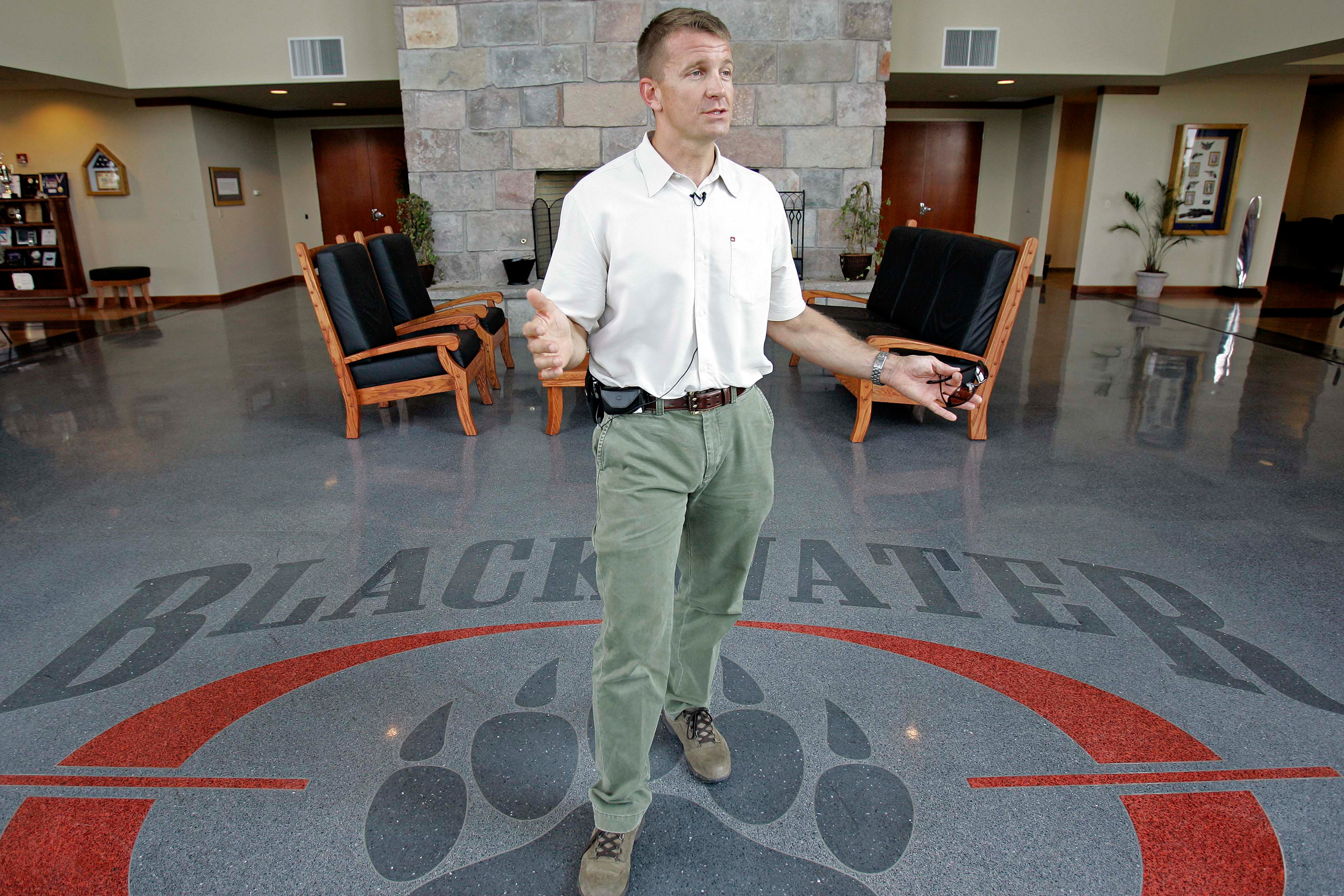 FILE – In a July, 21, 2008 file photo, founder and CEO of Blackwater Worldwide Erik Prince is seen at Blackwater’s offices in Moyock, N.C. Blackwater is trading real battlefields for a virtual one with the upcoming release of “Blackwater,” a first-person shooter for Xbox 360’s Kinect motion-sensing system that will attempt to give players a feel of what it’s like to be a private military contractor.(AP Photo/Gerry Broome, File)

Trump’s war with the „Deep State”

As reported by various publications across the United States in the last couple of days, the Trump White House is reportedly considering a proposal for a global, private spy network that would essentially work as a counter to the „deep state enemies” who want to undermine Trump’s Presidency. It might come to no surprise that the people who are supposedly behind this entire thing are no other than Erik Prince – the founder of the well-known Blackwater company – as well as retired CIA officer John Maguire and Oliver North, a man that was heavily involved in the Iran-Contra scandal.

While some may wonder why this idea might be pushed forward, considering the consistent number of Intelligence Agencies that the US has, this news might not seem that preposterous to the ones that have paid close attention to what has happened in the United States ever since President Trump came into office. The “deep state” paradigm has been repeatedly pushed forward by the Republican President during his campaign last year, alleging that there are officials in politics and government departments and agencies who seek to undermine his candidacy and later on his Presidency – officials that are either left-overs from the Obama administration or ideologues that heavily support the Democrat party.

The newly created private spy agency would be “off the books”, sidestepping official U.S. intelligence agencies and would report directly to the CIA Director Mike Pompeo, a very close associate of President Trump. A former senior U.S. intelligence official with knowledge of the proposals has reported that Mike Pompeo doesn’t trust the “CIA bureaucracy” at all, which in turn has made him push for the creation of a global spy network that would essentially collect intelligence that is not shared with the intelligence community.

As mentioned above, one of the main architects of this proposal is no other than Erik Prince, the founder of Blackwater (now Academi), a company that provides security services to the United States federal government on a contractual basis. Most people might associate Blackwater with the Iraq war, where the company received widespread notoriety in 2007, when a group of its employees were convicted of killing 14 Iraqi civilians in Nisour Square, Baghdad. Since 2003, the group has provided services to the Central Intelligence Agency, including a 2010 contract of over $250 million, and the United States federal government, for which it acted as a “private army-for-hire” in conflicts all around the globe, especially in Iraq and Afghanistan.

Erik Prince – who is also the younger brother of Republican Education Secretary Betsy DeVos – has had previous ties with Trump, donating $250.000 directly to his Presidential campaign back in 2016, as well as to his Make America Number 1 super PAC (which received roughly $100.000). Regarding this particular subject, Prince has denied working with retired CIA officer John Maguire, as well as having any involvement in this project at all. However, a source told the Intercept – the publication that first broke out this story – that “there is no doubt that Prince and Maguire were working together”.

A spokesman for the National Security Council has declared that the White House “does not and would not support such a proposal” and that he could find “no evidence” that the proposals were ever brought to the attention of the White House or the National Security Council. The CIA spokesperson told the Intercept that “You have been provided wildly inaccurate information by people peddling an agenda”.

While we might not find out the real truth behind all of these back-door decisions, one thing is clear – ever since winning the Presidency, the Trump cabinet has been engulfed in many battles with the so-called “deep state”, the latest being Mueller sacking one of the top FBI agents assigned to investigate the Russia collusion story due to obvious bias against the President himself. The constant leaks that have reached the public since January last year are definitely coming from somewhere inside the White House itself or other Intelligence Agencies, but are things that bad in Washington that it would require a private Secret Service to investigate the whole ordeal?

When will it end?

One thing stands out the most in this whole situation – the visible fracture between the Democrats and the Republicans is slowly turning into a battle that has every chance to escalate even further. The American society has never been this divided and one must ask himself if this division has always been there or if Trump acted as a catalyst for everything. Truth of the matter is that as long as the in-fighting continues, nothing will be done for the general public – and as long as the Democrat and Republican parties will keep on jumping on each other’s throats, bi-partisan cooperation will sadly never be possible.

The White House, via its Press Secretary, has already given its answer in regards to this most important issue – an answer that hasn’t confirmed nor denied anything whatsoever. The back-deals that are currently being done will eventually make it out to the public, but we all know what will happen if this turns out to be true. It’s either the CIA and other intelligence agencies trying to undermine the United States President or it’s President Trump trying something that no other President has tried before: to garner power for himself. Whatever the case may be, the United States loses.