Serbia: Spitting on the graves of NATO bombing victims 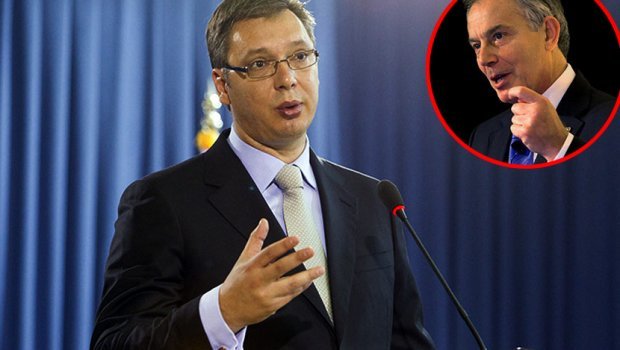 Vucic’s partnership with Blair is an insult to the memory of civilian victims of the 1999 war. On 23 April 1999, a NATO missile killed sixteen workers of the Radio Television of Serbia. A few hours later, UK Prime Minister Tony Blair praised the bombing and called for more such attacks. Alexandar Vucic, at that time minister of Information, publicly held Blair responsible for the attack, accusing him of being “the biggest criminal and beast”. Blair has repeatedly claimed that he bombed Yugoslavia “for humanitarian reasons”. He has never conceded that the 1999 war was a mistake or apologized for the thousands of innocent victims. However, in 2015, Aleksandar Vucic employed the former British prime minister as an advisor to the Serbian government. Nowadays, Vucic declares himself “impressed about Blair’s decency.”

16 civilians killed: “The bombing is working”

“The bombing is working, but we need to intensify it and carry it on.” That was UK Prime Minister Tony Blair’s message after the worst incident of civilian deaths in Belgrade during the 1999 war.

Aleksandar, Branislav, Darko, Dejan, Dragan, Dragorad, Ivan, Jelica, Ksenija, Milan, Milovan, Nebojša, Siniša, Slaviša, Slobodan, Tomislav – sixteen of the thousands of civilian victims of NATO bombing during the 1999 war on Yugoslavia. They were all workers of the Radio Television of Serbia (RTS). They were all killed on 23 April 1999, when NATO struck the headquarters of the RTS.

A NATO missile knocked down the transmission tower and two top floors collapsed. About 100 RTS staff members were at work. Many were killed instantly; many were buried in the debris. Horrified survivors fled into the street. A few hours later, Tony Blair praised the bombing and called for more such attacks.

Western public opinion and international human rights organizations questioned the legality and legitimacy of targeting civilian RTS. Human Rights Watch and Amnesty International condemned the bombing as a “deliberate attack on a civilian object” and “a war crime.”

But amid protests against the targeting of civilians, Tony Blair insisted that the devastating NATO strike on Serbia’s public television was “entirely justified.” Blair claimed that the sixteen civilian workers of the RTS deserved to die because they were “part of the apparatus and power of Milosevic.”

According to his own autobiography, Tony Blair was the western leader who pressed for a military intervention and NATO bombing of Yugoslavia in 1999. Prime Minister Blair’s justification was “to save thousands of innocent men, women and children from humanitarian catastrophe, from death, barbarism and ethnic cleansing.” He bombed Yugoslavia „for humanitarian reasons.”

Tony Blair was directly responsible for the deaths of the RTS workers. We know this not only because Blair himself bragged about the role he played in the NATO bombing, but also because he was immediately held responsible by the Yugoslavian government. And it was not some minor bureaucrat who accused Blair. It was Alexandar Vucic himself.

At that time, Vucic was Information Minister. “Such criminals as Clinton and Blair could not have been born by any mother,” Vucic told reporters while visiting the chaotic scene after the attack. “Just punishment will reach them. They are the biggest criminals and beasts. By comparison, even Hitler was but a little child.”

Vucic’s insult to the memory of NATO bombing victims

Tony Blair has never been ashamed of his aggressive advocacy of air strikes on Yugoslavia. He has never conceded that the 1999 war was a mistake or apologized for the thousands of innocent victims. One thing has changed though. Nowadays, Tony Blair believes that Vucic is a “strong reformer” and supports him.

Blair’s “beliefs” are fuelled with money. In 2015, Aleksandar Vucic employed the former British prime minister as an advisor to the Serbian government. Since then, Blair has been making regular visits to Belgrade, advising Vucic on policy-making and PR matters.

Alexandar Vucic is not furious over Blair anymore. Quite the contrary, he is now “impressed by Blair.” In Vucic’s words, Blair is no longer “the biggest criminal and beast”, he is “decent.”

Times change, Vucic explains to Western media. “You can’t live in the past all the time. We have moved on.” Vucic should tell that to the families of Aleksandar, Branislav, Darko, Dejan, Dragan, Dragorad, Ivan, Jelica, Ksenija, Milan, Milovan, Nebojša, Siniša, Slaviša, Slobodan, Tomislav.