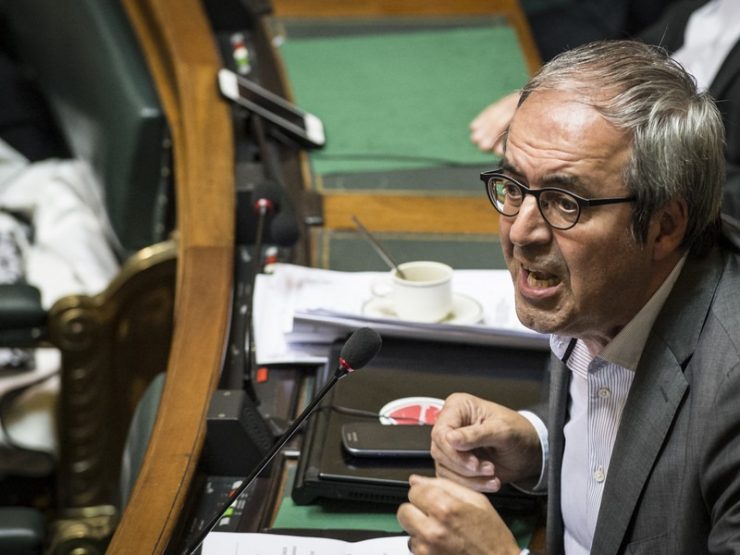 Belgian politician Dirk Van der Maelen (SP.A) is behind an attack on OSI. Over the last few weeks, OSI has been revealing the gross conflict of interest of the president of the Parliamentary Inquiry Commission and his effort to keep the real authors of the settlement law – the diamond lobby – safe. Two days after our last investigative piece on Van der Maelen, Apache, a Belgian news outlet, launched a venomous and ill-founded attack on OSI. We can now reveal that Dirk van der Maelen is an author for Apache, the socialist MP and our detractors are colleagues. Moreover, there are dozens of articles in Apache portraying Van der Maelen (and the SP.A) in a positive light. The perpetrators of the attack misreport facts and spread fake news stories. Almost everything they told about the Belgian settlement law was wrong. OSI succeeded where Belgian media failed.

A violent, ill-founded, but predictable attack

Some Belgian news outlets – particularly Apache and its partner Medor – recently attacked OSI. It was a violent and ill-founded attack; no reliable evidence was produced to support it. However it didn’t surprise us. OSI has published investigative reports on dictators and autocrats (from Joseph Kabila to Rodrigo Duterte, from Aleksandar Vucic to Kim Jong-un, from Robert Mugabe to Vladimir Putin), on drug lords and gang leaders, on lobbying firms and media tycoons, on CIA and FSB. All these individuals and organisations have friends in media (most of them have their own media outlets) and many have used their media platforms to denigrate us. Unsurprisingly, the same thing happened in Belgium.

In recent weeks, OSI has revealed Inquiry Parliamentary Commission’s efforts to keep the real authors of the settlement law – namely, the diamond traders and their seemingly all-powerful lobby – safe. We particularly focused on the president of the Inquiry Commission, Dirk van der Maelen (SP.A), on his shyness in front of the representatives of the diamond lobby that ridiculed the Commission, his failure to fulfil his duty of impartiality, and his narrow political agenda. http://www.opensourceinvestigations.com/, http://www.opensourceinvestigations.com/. We revealed his gross conflict of interest: in 2009, Van der Maelen was the vice-president of the parliamentary commission that unanimously recommended the introduction of the extended criminal settlement procedure http://www.opensourceinvestigations.com/.

And the SP.A politician retaliated. Not directly, but through his friends in the Belgian media. We published investigative pieces on Dirk Van der Maelen on 20 April and 2 May. On 4 May, Apache published a venomous article against OSI, full of conspiracy theories-based accusations. One day later, Medor, Apache’s French-language partner, posted the same story.

OSI is an investigative project. It took us a couple of hours to discover who is behind the attack in the Belgian media outlets. Dirk Van der Maelen shares a very special relationship with Apache. In fact, the socialist MP and our detractors are colleagues.  Dirk van der Maelen is an author for Apache. 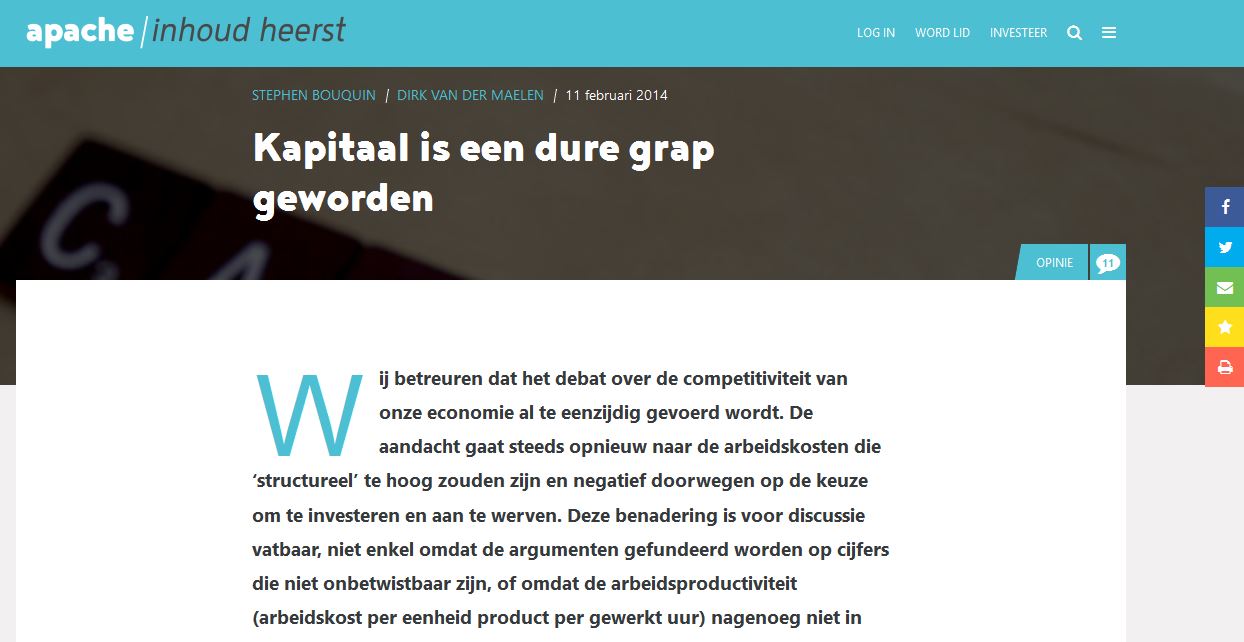 A record of fake news stories

The attack on OSI is not only political orchestrated and ill-motivated. It is also somehow ironic given that the perpetrators themselves are the ones who misreport facts and sell as “investigative journalism” pieces backed by no hard evidence, with no investigative value – pieces that, according to journalistic standards, are nothing but fake news. Almost everything Belgian media told about the settlement law was wrong. OSI succeeded where Belgian media failed.

Belgian media claimed that Patokh Chodiev, a London-based Uzbek oligarch with Belgian citizenship, is the one who changed the Belgian criminal law. http://www.knack.be/, https://www.apache.be/, http://plus.lesoir.be/. This was a false story. OSI proved that the settlement bill was meant to resolve Antwerp diamond industry’s huge legal issues, particularly those of Omega Diamonds. The draft law was created by the diamond lobby, written by AWDC’s lawyers, and endorsed by the informal group of Belgian MPs serving the interests of the diamond sector.

Belgian media claimed that Patokh Chodiev was the first to benefit from the changes. https://www.apache.be/, http://plus.lesoir.be/. This was an untrue story. OSI proved that the first beneficiary of the new settlement law was the French colossus Société Générale, who was far more interested than Chodiev to change the law. The first transaction that ever happened took place in Anvers on 10 June 2011, between the Public Prosecutor and Société Générale. The French bank, that was under criminal investigation for alleged frauds, paid 40 million Euros and got away with crime.

According to the Belgian media, the settlement bill was drafted by Catherine Degoul, the French lawyer of Patokh Chodiev http://plus.lesoir.be/, https://www.apache.be/, http://www.knack.be/. This story is a fake. OSI proved that the draft was written by Raf Verstraeten. AWDC’s and Omega Diamonds’ lawyer drafted the settlement bill and negotiated it in a series of secretive meetings with Antwerp prosecutors in 2008-2009

Belgian media claimed that Armand De Decker, Chodiev’s lawyer in Belgium and former president of the Belgian Senate, managed to persuade MPs to introduce the settlement bill and to vote for it. (source: http://plus.lesoir.be/,  http://plus.lesoir.be/,  http://www.levif.be/, https://medor.coop/.  This was also proved wrong. OSI revealed that it was the diamond lobby that wrote and pushed for the Belgian reform of the Code of Criminal Procedure. AWDC, the most powerful lobby group in Belgium, used its parliamentary arm a secretive group called Diamond Forum. Diamond lawyers, Haelterman and Verstraeten, were even invited as “academic experts” in the Senate in 2011 to share their expertise in the drafting of the Enlarged Criminal Transaction.

The Belgian media said the Chodiev transaction amounted to around 23 million euros. http://plus.lesoir.be/, https://www.apache.be/, http://kw.knack.be/. This is a fake news item. The truth is very different: Chodiev paid only half a million euros, far less than the French bank Société Générale (40 million euros), or the Belgian diamond trader Omega Diamonds (a whopping 160 million euros).

Following OSI’s revelations, the Inquiry Commission was forced to admit that the settlement law was drafted by the diamond lobby for the benefit of the diamond dealers involved in fraud investigations. But when Raf Verstraeten’s name appeared for the first time during the hearings, Belgian media claimed that the lawyer drafted the settlement law for the benefit of his client Patokh Chodiev http://www.lesoir.be/. This also proved to be completely false. Verstraeten made it very clear to the inquiry commission that his cooperation with Chodiev completely discontinued in 2007. That was one year before the diamond lawyer drafted the legal text on settlement agreements and 4 years before the adoption of the settlement law. Moreover, according to Verstraeten, his professional relationship with Patokh Chodiev ended in bad terms, due to a “lack of confidence.”

And the list could go on. But there is one more thing worth noting: Belgian media praises Dirk Van der Maelen’s role as president of the Inquiry Commission. In fact, there are dozens of articles in Apache portraying Van der Maelen (and the SP.A) in a positive light https://www.apache.be/. This is not “investigative journalism”, it’s propaganda. OSI proved that the entire Belgian political establishment supported the settlement law for the benefit of the diamond sector. Dirk Van der Maelen lied by omission when he failed to mention that in 2009 he was the vice-president of the parliamentary commission that recommended to the Belgian parliament to establish a general amicable settlement and transaction system.