How Société Générale Changed the Criminal Law in Belgium 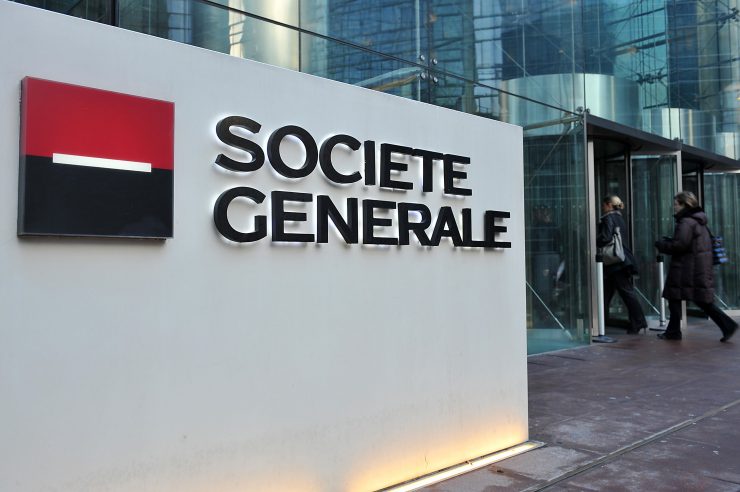 The Belgian media claims that Patokh Chodiev, a London-based Uzbek oligarch with Belgian citizenship, is the one who changed the Belgian criminal law because he was the first to benefit from the changes.

OSI is now in a position to prove that, in fact, the first beneficiary of the change was the French colossus Société Générale, who was far more interested than Chodiev to change the law. For the French bank, it was simply a matter of survival.

Former French President Nicolas Sarkozy and former Belgian Vice-Prime-minister Didier Reynders fought hard to amend the Belgian Code of Criminal Procedure to help Société Générale to stay clean. This is the story of how a very powerful and influential bank changed the Belgian law to avoid a huge scandal and possible bankruptcy.

It is also worth mentioning that, due to a very powerful PR campaign, Société Générale managed to keep itself away from the public eye, framing the scandal so that to appear that Chodiev is behind this legal change. Hence, the Kazakhgate, a story that the Belgian media kept using to feed its public. Being both rich and aloof, Chodiev thus became the perfect scapegoat.

Once the transaction with the Public Prosecutor has been entered into and executed, the criminal proceedings would be terminated. Since the payment made under the transaction is not a penalty, the transaction would not appear in the judicial register. In other words, the offender is cleared of all charges, and his or her record remains clean.

The first such transaction that ever happened took place in Anvers on 10 June 2011, between the Public Prosecutor and Société Générale. The French bank was under criminal investigation for alleged frauds. According to the prosecutors, Société Générale was coordinating at least 20 Belgian companies in a fraudulent scheme involving money laundering and other fiscal frauds.

The bank entered into a transaction with the Public Prosecutor in Anvers, paid 40 million Euros and got away with crime.

It is interesting to note that the Belgian media presented this transaction as being the second one that was entered into after 16 May 2011. According to La Libre Belgique, for instance, the Société Générale transaction came after the Chodiev transaction known as Kazakhgate: http://www.lalibre.be/ 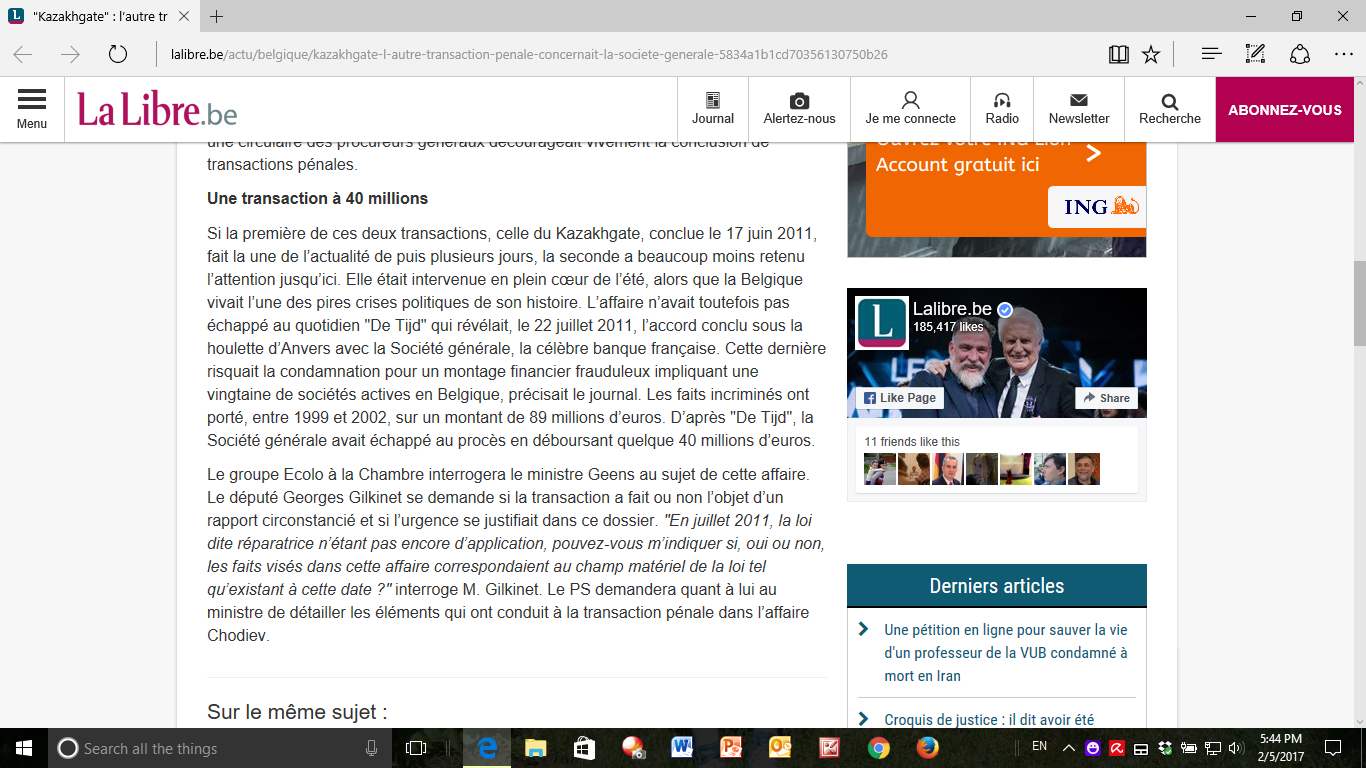 However, in his intervention in the Chamber of Deputies in 23 November 2016, the Belgian Minister of Justice, Koen Geens, clearly stated that Société Générale has entered into a transaction with the Public Prosecutor in Anvers, and that this transaction was written on 10 June 2011, one week earlier than the Chodiev transaction. 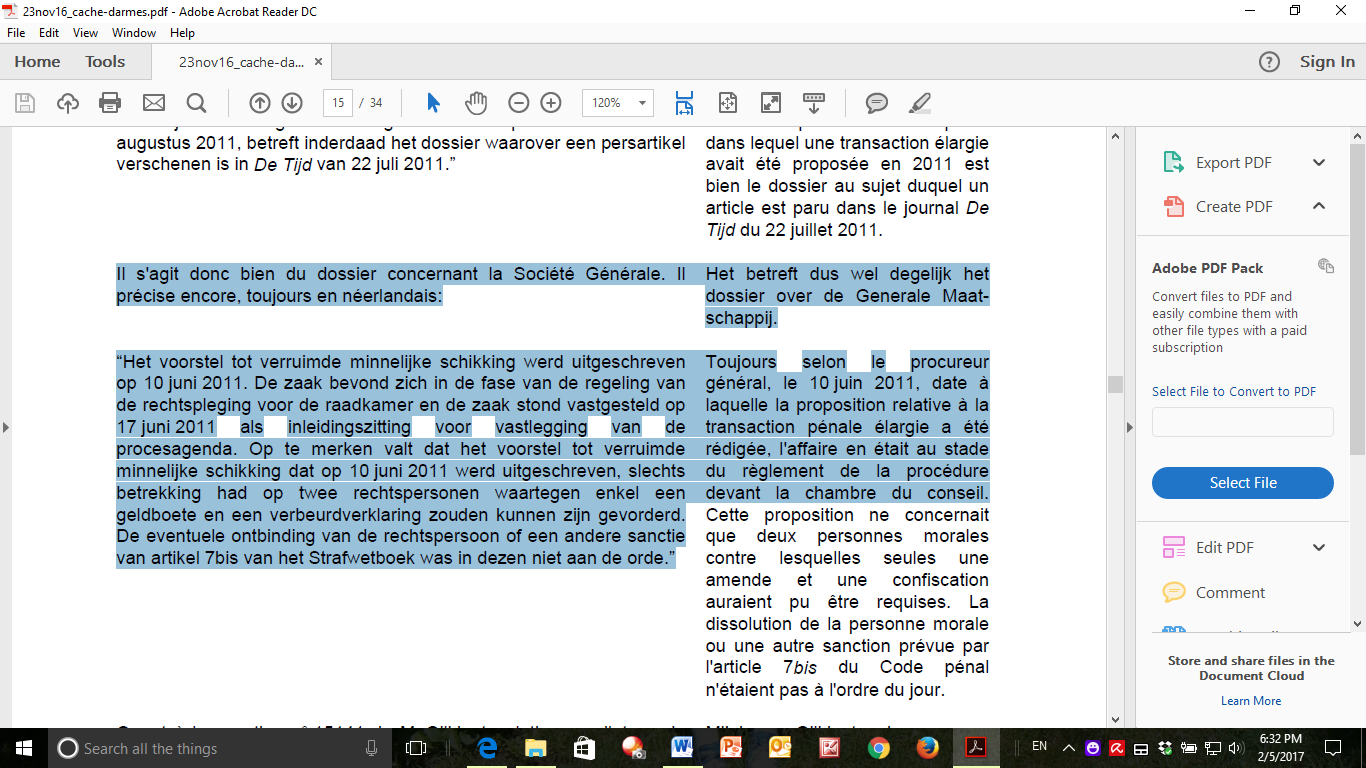 In fact, the transaction concerning Société Générale has been sent for approval on 30 May 2011, just two weeks after the law regarding the enlarged transactions came into force. 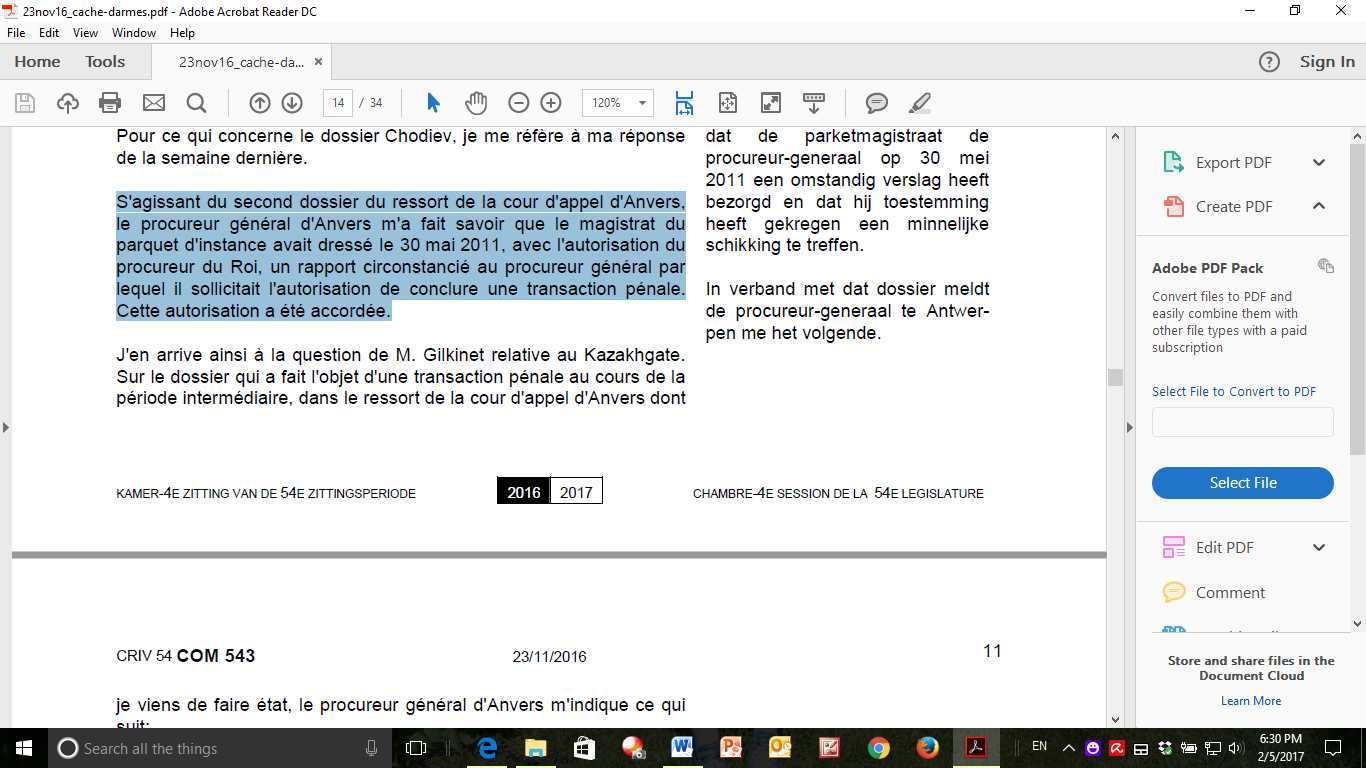 Therefore, there can be no doubt that Société Générale was the first beneficiary of the change in the Belgian Code of Criminal Procedure. This information provided by the Belgian Ministry of Justice in November 2016 was never disseminated by the media, which suggests that Société Générale used its influence to keep itself away from the public eye.

The CEO of Société Générale at the time was Frédéric Oudéa, a friend of the French President Nicholas Sarkozy. In 1993 Oudéa became a member of the French government as a technical adviser of Sarkozy, who was then Minister of Budget and Communication (source: https://fr.wikipedia.org/).

Oudéa was also friend with François Pérol, who in 2011 was the assistant general secretary of President Sarkozy (source: http://tempsreel.nouvelobs.com/rue89/).

In order to avoid a criminal indictment that would have been devastating for Société Générale, Frédéric Oudéa had the support of President Sarkozy. All that was needed was a Belgian friend to change the criminal law in Belgium.

And, sure enough, a Belgian friend came to the rescue. It was Didier Reynders, at the time Vice-Prime-minister in the Belgian Government and Minister of Finance.

Reynders and Sarkozy are indeed close friends. In 2007, André Gilain wrote a biography of Didier Reynders. The preface is written by none other than Nicholas Sarkozy himself, who writes: ”Didier is my friend, and I am proud to be his.” On his side, Reynders adds: “Above all, he [Sarkozy] is a friend, I know him for many years: even since he wasn’t in the powerful position that he is in today.” (source: http://ptb.be/)

So what can friends do for one another? Quite a lot, apparently.

Yves Leterme, at the time Belgian Prime-mister, witnessed publicly: “It was a very important political problem. He [Reynders] was very active on this matter, and took the enlarged transaction to his heart.”

Besides, all the Belgian MPs recognized that the Government pressed them a lot to vote for the enlarged transaction.

It was, of course, a matter of urgency. Société Générale had to be saved from indictment. Sarkozy, Oudéa and Reynders didn’t shy away from doing it. After all, it was “a very important political problem.”