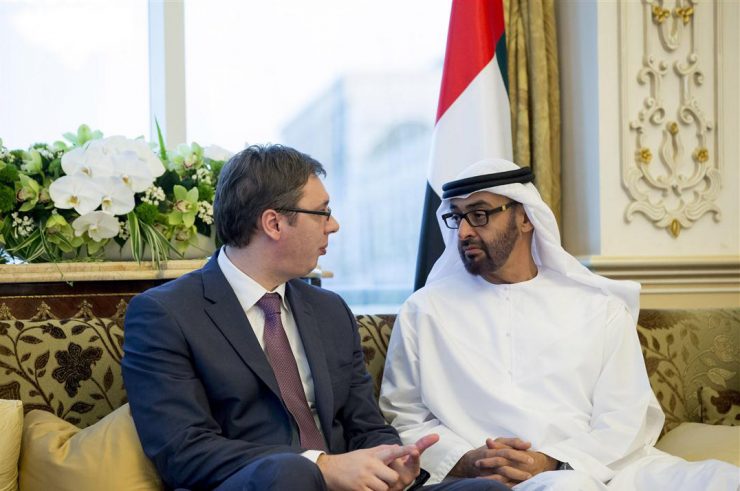 SNS and the Serbian Government didn’t hire Bell Pottinger by accident. The lobbying contract was part of a wider Vučić-UAE arrangement. Bell Pottinger founder lord Bell has been advising UAE leaders for more than 30 years. In 2013, the UAE sent its lobbyists to support Vučić and SNS. UAE pumped billions of dollars in Serbia boosting Vučić’s 2014 electoral bid. The reasons for UAE investment in a Serbian nationalist known for his violent anti-Muslim rhetoric are covered in secrecy. However, the word Kosovo was hardly ever mentioned during Vučić’s 2014 campaign.

In 2013, the UAE sent its lobbyists to support SNS Government and Vučić’s party. In fact, Government of Serbia, Etihad and Prime Minister’s Office of the United Arab Emirates were all clients of Bell Pottinger at the very same time.

In November 2012, Lord Timothy Bell recounted: “I’ve been coming to UAE for 30 years, since I first advised Sheikh Zayed, and I’ve watched it grow.” Lord Bell is the founder and chairman of the lobbying firm Bell Pottinger, which worked for Serbian Progressive Party (SNS) and the Serbian Government in 2013 and 2014. Sheikh Zayed was the first president of the UAE. His son, Crown Prince Mohammed bin Zayed bin Sultan Al-Nahyan, is Alexander Vučić’s personal friend.

The lobbying contract was part of a wider Vučić-UAE arrangement

Bell Pottinger contract was part of Vučić-UAE arrangement. The UAE’s support went far beyond whitewashing Vučić and the SNS Government.

On 17 February 2013, the governments of Serbia and the UAE signed a strategical partnership agreement. Other agreements on border cooperation, mutual boost and protection of investments, and in the field of defence were also signed by the two governments.

Couple of months later, in June 2013, the Serbian government was already a client of Bell Pottinger. At the same time, through a series of equity investments, loans, memorandums, and trade partnerships, the government of Serbia secured just over $1bn worth of UAE cash.

All the UAE – Serbia agreements were signed or announced by Alksander Vučić.

UAE won the 2014 elections for Vučić and SNS

Aleksandar Vučić campaigned as the candidate who can draw investment from the UAE. Vučić, who spoke of his personal friendship with Abu Dhabi Crown Prince Sheikh Mohammed bin Zayed Al Nahyan, announced UAE deals worth billions of dollars. These included the controversial luxury riverside project Belgrade on Water.

As a result, SNS won the elections by a landslide and Aleksandar Vučić became Prime Minister of Serbia.

The reasons for UAE investment in Vučić are shrouded in secrecy. Virtually all Emirati citizens are Muslims and Vučić is the Serbian politician who said in 1995 that his country would kill 100 Muslims for every Serbian who died.

What did Vučić offer in exchange?

One thing is certain: One word was hardly ever mentioned during Vučić’s 2014 bombastic campaign: Kosovo.