Home
Uzbekistan
Rustam Inoyatov: The Most Feared Man in Uzbekistan

Rustam Inoyatov: The Most Feared Man in Uzbekistan 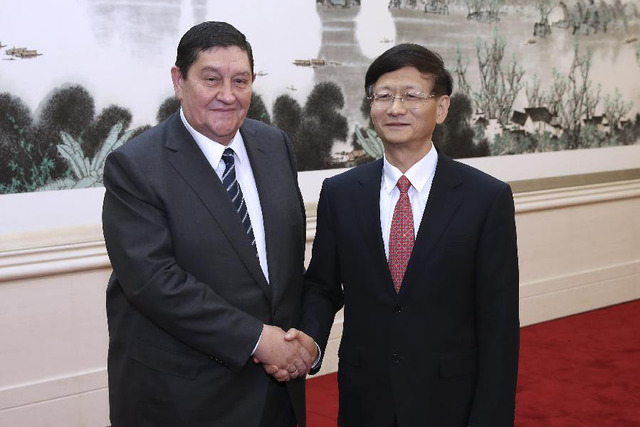 On 12 September 2017, 23 international human rights organizations, including Human Rights Watch, Reporters Without Borders and Transparency International, asked US Government to impose financial sanctions and visa restrictions on Rustam Inoyatov, the head of Uzbekistan’s National Security Service. NGOs accused Inoyatov of being directly responsible for arbitrary detention, torture and other serious abuses. In the next few weeks, OSI will be publishing several investigative articles on Rustam Inoyatov, one of Uzbekistan’s most powerful and secretive figures. And definitely the most feared.

Rustam Rasulovich Inoyatov was born on 22 June 1944, in Sherabad (Sherobod), a city in the Surxondaryo Region, SE Uzbekistan. Being part of an influential family (his father, Rasul Inoyatov, was a colonel in the Uzbek Soviet Republic’s KGB), Rustam Inoyatov has become a key figure in the powerful Tashkent clan.

Inoyatov graduated from Faculty of Oriental Studies of Tashkent State University in 1968, with a major in Iranian Studies. After graduating from the university and serving in the army, he joined the First Main Directorate (PGU) of KGB. He worked under diplomatic cover in Afghanistan in the late 70s and early 80s.

In addition to Uzbek and Russian, Rustam Inoyatov speaks English and Farsi. Since 1999, he is the president of the Tennis Federation of Uzbekistan

Inoyatov was appointed to head Uzbekistan’s National Security Service (SNB), a successor of the KGB in the former Soviet republic, on 28 June 1995. Inoyatov took over from Gulyam Aliyev as chief of the SNB, after being his first deputy for several years.

In 1996 he was given the rank of Lieutenant-General and three years later he was promoted to colonel general. In August 2006, on the occasion of the 15th anniversary of Uzbekistan’s independence, Inoyatov was awarded “For altruistic services” medal by a presidential degree.

Rustam Inoyatov is by far the longest serving Uzbek top official. He has been leading SNB, the most powerful institution in Uzbekistan, for over twenty years. But, despite his fame, Inoyatov has managed to keep a very low profile. He is rarely seen in public and nobody in Uzbekistan, with the rare exception of some official media, takes Rustam Inoyatov’s picture.

It was president Islam Karimov who appointed Rustam Inoyatov. Karimov ruled Uzbekistan with an iron fist from 1989 until his death in 2016, and Inoyatov was essential in maintaining his authoritarian regime.

While according to some reports the February 1999 Tashkent bombings were masterminded by the SNB under the leadership of Inoyatov, there is no doubt that he was directly responsible for the Andijan massacre and the subsequent obstruction of an international investigation.

On 13 May 2005, SNB and Interior Ministry troops using machine guns, automatic rifles and sniper guns, opened fire on protesters who had gathered in Andijan’s main square. No warning shots were fired. The security forces fired indiscriminately at unarmed men, women and children. Up to 750 were killed according to witnesses, journalists and human rights advocates. Uzbek authorities said 187 people were killed, and used a show-trial to claim that they were all “terrorists”.

In fact, the clampdown targeted a protest against the oppressive regime of Islam Karimov. With the Andijan slayings Inoyatov gained Karimov’s unlimited trust. In the following years the SNB chief oversaw a vast system of political repression ranging from intimidation campaigns (including mass arrests) to torture (arrested dissidents were being beaten all over their bodies, having boiling water poured down their backs, suffering simulated suffocation) and murder.