Home
Mexico
Mexico - an encounter of the close kind

Mexico – an encounter of the close kind 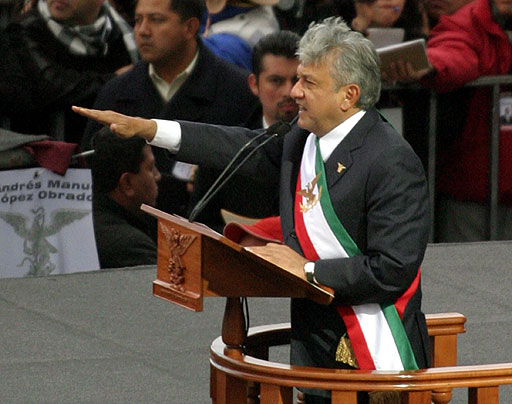 The 2018 Mexican Presidential election is just around the corner and the political parties have already started flexing their candidates, in hopes that they will construct the perfect campaign that would essentially secure the votes of close to 94 million Mexicans. Although the most common-found themes often talked about by the Presidential candidates touch the subjects of corruption, economic underperformance and general nation-wide unhappiness, the big elephant in the room this time will nevertheless be the US President, Donald J. Trump.

With less than eight months away from the election, current polls show Andres Manuel Lopez Obrador – also known as AMLO – as having the notable advantage over all others, with former National Action Party leader Margarita Zavala in second place. Other candidates have yet to be nominated by various other political parties, but there’s still time for a lot to happen, especially given the volatile state of the Mexican political landscape.

Andres Manuel Lopez Obrador is the current leader and founder of the National Regeneration Movement (MORENA), a left-wing political party that has gained a lot of momentum in the Mexican society since its inception in 2014. A two-time runner-up in the 2006 and 2012 Presidential election, Lopez Obrador has stormed Mexican politics by playing on the discontent of the people towards the state institutions via the use of a widely perceived populist rhetoric.

By touching on sensible subjects such as combating the systematic corruption embroiled in the Mexican state apparatus or by calling out acting President Enrique Pena Nieto on his inability to stand up to his US counterpart, Lopez Obrador has managed to swift the public tides towards his own liking, which in turn has triggered a lot of analysts to worry about the sudden rise of left-winged populism in a country that has been traditionally against socialism.

A former Head of Government of the Federal District (2000-2005), Lopez Obrador is no stranger to controversy: he has twice refused to accept general election defeats, alleging fraud and mass vote-buying. Moreover, after the 2006 Presidential election – which he lost by a margin of 0.58% – Lopez Obrador organised several gatherings in downtown Mexico City, with hundreds of thousands of people attending to protest the corruption of the Mexican government and its inability to conduct a proper electoral process. Furthermore, in several acts of civil disobedience, Obrador organised the blocking of 12 kilometers of one of the most important roads in the capital, Paseo de la Reforma, which houses several important hotels, corporate main offices and the Mexico City Stock Market – a move that has supposedly brought daily losses of over $35 million.

The populist rhetoric used by AMLO stems from the frustration of the ordinary Mexicans in regards to their Government and the so-called “ruling elite”. Albeit legitimate, the constant use of emotional, anti-system messages have brought many to call Obrador a dangerous demagogue who does not respect democratic norms whatsoever. This is further backed by the fact that in the aftermath of the 2006 Presidential Election, Lopez Obrador’s sympathizers proclaimed him as the “Legitimate President”, a move that he wholeheartedly embraced, even going as far as calling for the establishment of a parallel government and shadow cabinet.

As we have seen from his past experiences, Lopez Obrador has indeed painted himself as a man of the people, on a mission to rid Mexico of the ruling elite class. His blunt language, constant campaigning and leftward leaning has scared a lot of Mexico’s political and business classes, that see his rise as a threat to the stability of the economy in the short and medium term. His anti-system rhetoric has indeed brought him many followers – but how many of them would support a socialist Mexico in the end?

Although a very vocal critic when it comes to institutionalised corruption and unequal distribution of state funds, Lopez Obrador is no stranger to big money. Over the years, he has benefited from the same “corrupt” system that he now wishes to demolish – be that by receiving state funds or private donations for his political campaigns. Obrador points out to the billions of dollars lost to corruption, but forgets that he himself has been at the forefront of Mexican politics for the last decades. Fact of the matter is, Lopez Obrador is playing a dangerous populist game by tapping into an already existing national pool of frustrations, promising to bring down the system and completely change the face of the country – a promise that he couldn’t keep even if he wanted to. But alas, he doesn’t.

“It’s unclear yet if AMLO will be more Lula than Chavez”, the Mexican Finance Ministry said. And that’s exactly what is at stake here – the risk of throwing Mexico into a Venezuelan-like fiasco by electing a man that could essentially destroy the already fragile economy in a very short period of time. The current political uncertainty is already having effects on the stock market and generally on the economy, with more and more investors opting for an exit strategy in case Lopez Obrador wins.

Like his rivals, Lopez Obrador is trying his best to capitalize on anti-Trump sentiment, who he described as “an irresponsible bully”. Acting as the de facto leader of the Mexican opposition, Obrador has been a staunch critic of the Mexican President, Enrique Pena Nieto, who he constantly accused of failing to stand up to Donald Trump: “He didn’t have the guts to tell Trump, ‘You will respect the Mexican people, you will respect our migrants’’’. Nevertheless, since Trump’s win in November, Obrador has seen a surge of support in the polls, with many looking at him as a man that can stand up to the newly changed US foreign policy doctrine.

This, however, can backfire immensely – if Obrador is indeed elected as the Mexican President, the already strained US-Mexico relationship will take a dive to the worse, which in turn might bring an economic disaster upon the Mexican citizens, given the $500 billion annual trade deals between the two neighbouring countries. Signs are already there showing that Mexico is slowly drifting towards China and Russia when it comes to trading partners, especially after NAFTA has been put under the magnifying glass by the United States – a move that will most likely be accelerated if AMLO is elected president, given his hard line in NAFTA, a huge dislike of Trump and his limited appetite for negotiation.

There’s no wonder that the Kremlin propaganda machine – under the guise of Russia Today – has already started featuring a lot of positive segments on Lopez Obrador – whatever the appeal the Kremlin may see in AMLO, the mean reason behind it would be that of destabilizing the United States economy and security.

As a final note, 2018 will act indeed as a turning point for Mexico. Will the country retain its national unity or will it completely fracture? Will the other candidates manage to disrupt the popularity of Lopez Obrador or will he become a President “of the people” just in name only? Will the Mexican society prove once more that it’s mature enough not to fall into a populist rhetoric that brings nothing but economic despair? There are only a couple of months left until we’ll see the final results – nonetheless, the North-American continent is up for an awakening regardless of who wins in Mexico, as the United States is enacting its “America First” policies.