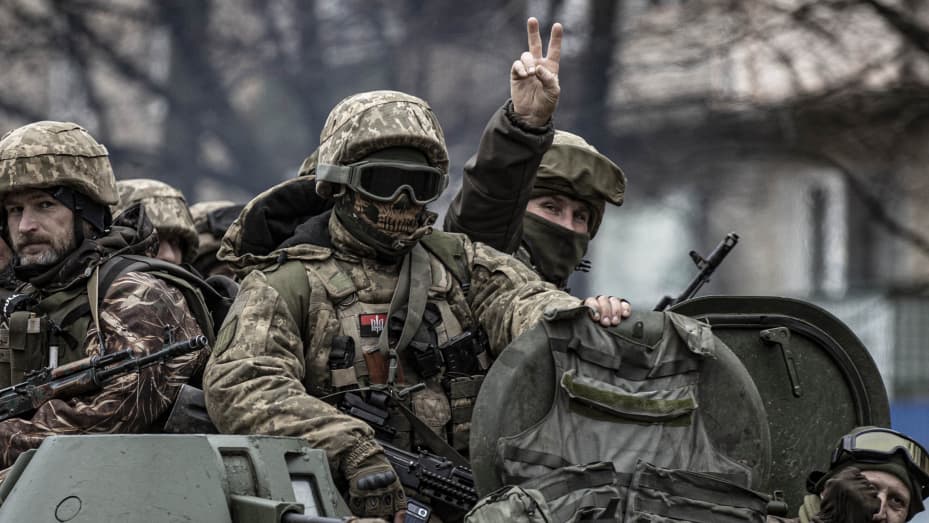 As Russian forces climb the hilltops south of the city of Bakhmut, Ukraine sends in all of its remaining reserves to plug the gaps. Trench warfare has suddenly been replaced by brutal urban incursions that end up in hundreds of soldiers from both sides getting killed or maimed. As winter makes its debut, both armies are trying to entrench themselves and not give up an inch of land. With neither side opting for peace, total war is on the menu.

The city of Bakhmut, also known as Artyomovsk in Russian, has been a frontline city since May. According to the Associated Press, “taking Bakhmut would rupture Ukraine’s supply lines and open a route for Russian forces to press on toward Kramatorsk and Sloviansk, key Ukrainian strongholds in Donetsk province”. From August onwards, the Russians have been trying to storm the city, but to no avail.

The battle for Bakhmut represents a microcosm of the entire invasion of Ukraine. A brutal engagement between two sides that don’t have the strength to win, a meatgrinder of Ukrainian and Russians alike. Normal people forced to fight against their peers, in the name of geopolitics and survival. Sons, fathers, grandfathers, all spilling their blood for one last “Oorah” of a political class that refuses to acknowledge that war is not the only answer to complex questions.

Almost 10 months after Putin shocked the world by announcing the start of the “Special Military Operation” in Ukraine, the war has taken so many turns that not even experienced analysts can predict what will happen anymore. While virulent propaganda campaigns are making their rounds across the globe, countless soldiers are fighting for their lives in mud, blood and sweat. In the meanwhile, both armies are making advances or retreating, depending on who you listen to and who you believe.

Unlike Russia, Ukraine has successfully employed strategic communication practices that have had great impact on how much international support the war-torn country has managed to receive. President Zelenskyy has won the hearts and minds of most Western observers, while President Putin has seen even former allies turning against him. This wave of support for Ukraine has turned the tides of war. Or so we thought.

Shortly after the Ukrainians managed to take back Izyum and spearhead a general offensive against the Russian army in the North of the country, most observers predicted that the Russians will soon run out of steam. News of disgruntled Russian conscripts, lack of new missiles and strategic command failures dominated the Western media, painting a picture of short-lived optimism. But while the West was preparing the general public for an outright Ukrainian victory, a sinister plot was being orchestrated in Kremlin. One that would see a distinguished, yet brutal Russian General enter the fray.

On 8 October 2022, Russian President Vladimir Putin appointed General Sergey Surovikin as the commander of all Russian forces invading Ukraine. Following multiple military setbacks and embarrassing retreats, the Russian army was in dire need of a new leadership and Surovikin, best known for his exploits in the Syrian civil war, seemed like a good pick for Putin.

Under the command of Surovikin, a significant turning point in the fight against the Syrian opposition was achieved. While acting as Commander of the Aerospace Forces, the Syrian government regained over 50% control of Syria by the end of 2017. According to many Russian military commentators, it was Surovikin who managed to turn the tide of war. But his opponents, including western analysts, quickly pointed out the brutality of the Russian General, who was dubbed “General Armageddon” for his repeated attacks on civilian infrastructure.

Surovikin, who is a proponent of large-scale missile attacks on civilian infrastructure, was appointed as the commander of all Russian forces in Ukraine in October, succeeding Colonel General Gennady Zhidko. Having already served as the commander of the Army Group “South”, Surovikin was reported as saying that “the situation in the area of the ‘Special Military Operation’ can be described as tense”.

Shortly after being appointed by Putin to lead the Russian invasion, Surovikin started to systematically destroy Ukraine’s electrical grid, in hope that it will put even more pressure on the Ukrainian government to concede. He had also made the controversial decision to abandon the strategically important city of Kherson, prompting the Ukrainian army to push even further towards Crimea. But as we’ve grown to know over the last hundred years, all armies must eventually stop at the Dnieper River. Even the Ukrainians.

The future looks grim, for everyone

With winter fast approaching, Ukraine finds itself between a rock and a hard place. Despite the latest territorial advances and incredible dedication and courage of the regular Ukrainian units, the Russians are now grinding the Ukrainian electrical grid to the ground. With more than 47% of the country’s strategic energy production being crippled, millions of civilians are now struggling to heat their homes, charge their phones or even work. It’s hard to even think about it, let alone live it.

Even though Western media has long said that the Russians will eventually run out of missiles, reality on the ground shows otherwise. Apart from the few hundred Geranium-1 (Shahed) drones that the Russians have received from Iran, all information points out to the fact that Russia has finally mobilized its war economy. As for the Armed Forces, the country has just finalized its partial mobilization, with hundreds of thousands of Russian conscripts getting ready to finally arrive on the front. For them, the war has just started.

The survival of Ukraine is, at this point, completely in the hands of the West. The Ukrainian Army, with all its qualities and battle-hardened soldiers, cannot defend the entire front without a constant supply of ammo, weapons and information. While both NATO and the West have made the right decision to help Ukraine against the Russian aggression, cracks are now starting to show up in how the collective block should proceed next.

Sending in more weapons and ammunition isn’t feasible, given how low the strategic reserves of some countries look like. And unequivocally backing Ukraine politically might soon turn bad for a lot of European politicians, who are now struggling with high inflation and a rising cost in gas and electricity. Recent elections in the EU have clearly shown that the dissident, populist movements are making a comeback, with some of them openly praising Putin and Russia. Our entire world is turning upside down, and proper winter hasn’t even started yet.

Both the EU and the US will soon have to make a very important decision. Will they continue to support Ukraine until the very end, and risk internal turmoil? Or will they cave in to the pressure and force Ukraine to sign yet another humiliating treaty, like they did before with Minsk-1 and Minsk-2? How will Ukraine react, considering how much the country has lost in the past 10 years? How will millions of civilians that have fled their home country feel about this betrayal? These are the questions that will have an answer in the following months. Regardless of how we feel about this conflict.

The invasion of Ukraine by Russia represents a turning point in our civilization. After a century of peace and progress, our world is yet again thrown into the meatgrinder. And just like the soldiers in Bakhmut, none of us it seems will be willing to give up an inch of our lands. Despite all signs pointing to the end of the age of diplomacy, it’s up to us to keep our heads straight and act rationally, not emotionally. Before it’s too late. Before we lose one of our most important qualities: our humanity.