Rodrigo Duterte – A Direct Threat to the Life of Filipino Soldiers 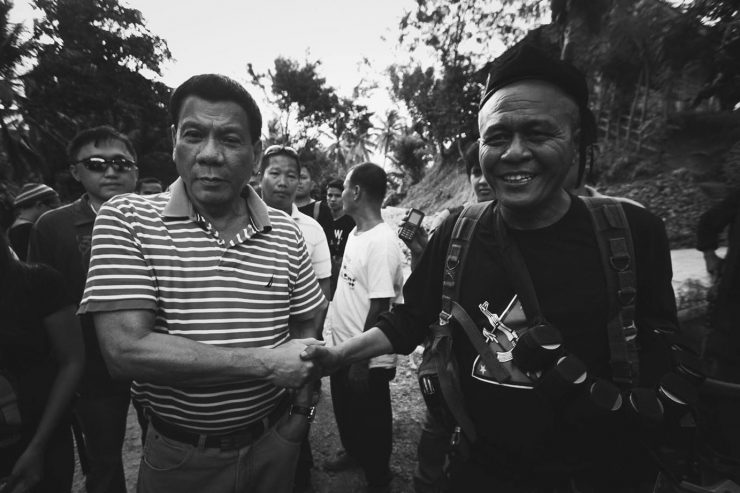 The Filipino soldiers who fought NPA are no longer safe

On 28 June 2015, soldiers of the Philippine Army’s 10th Infantry Division killed Leoncio Pitao. A top commander of the terrorist New People’s Army (NPA), Pitao, aka Kumander (Ka) Parago, was responsible for killing many Filipinos. He was one of the terrorists responsible for the Tagum massacre and, for a long time, the most wanted NPA commander. A special military task force (Task Force Minion) had been created to search and capture Pitao.

Pitao was killed in gunfight, when an NPA squad encountered a section of the Philippine Army’s 6th Scout Ranger Company.

However, when the military killed Leoncio Pitao, they killed not only a terrorist commander, but also Rodrigo Duterte’s personal friend. “I’m sad because Ka Parago was my friend“, the grieving mayor said in July 2015. He added that, far from being a terrorist, Pitao was “a dreamer“, one who should be “admired” and “respected” for his “communist ideology“.

So Duterte organized a hero burial for his terrorist friend in Davao City. On 10 July 2015, NPA membres marched on the streets of Davao. Mayor Duterte allowed NPA to use the city-owned gym for the wake of Pitao.

Nowadays, Rodrigo Duterte is running for the Philippine presidency, vowing to kill 100,000 Filipinos with the support of his NPA friends. It is more than likely that the soldiers who killed Leoncio Pitao, Duterte’s personal friend, will be among those 100,000.

Turning the Malacanang into a terrorist sanctuary

The Philippine Army’s ally in fighting terrorism is another of Rodrigo Duterte’s enemy: the US Government. The US has been working with the Government of the Philippines to monitor and investigate groups engaged in or supporting terrorist activities.

The Communist Party of the Philippines/New People’s Army is on State Department’s list of Foreign Terrorist Organizations (FTO). NPA was originally designated as an FTO in August 2002, under an Executive Order issued by the US President as response to the 9/11terrorist attacks.

The US considers NPA a terrorist organization that has the aim of overthrowing the government of the Philippines. According to the State Department, NPA has an active urban infrastructure to conduct terrorism and uses city-based assassination squads. The Communists primarily targets Philippine security forces, politicians and judges, but also US troops participating in joint exercises as well as U.S. Embassy personnel.

America’s enemies in the war on terror are Duterte’s friends and allies. The Philippine presidential palace is about to become a terrorist sanctuary.