Home
Japan
US Government Report Declassified: The Aftermath of the Fukushima Disaster

US Government Report Declassified: The Aftermath of the Fukushima Disaster 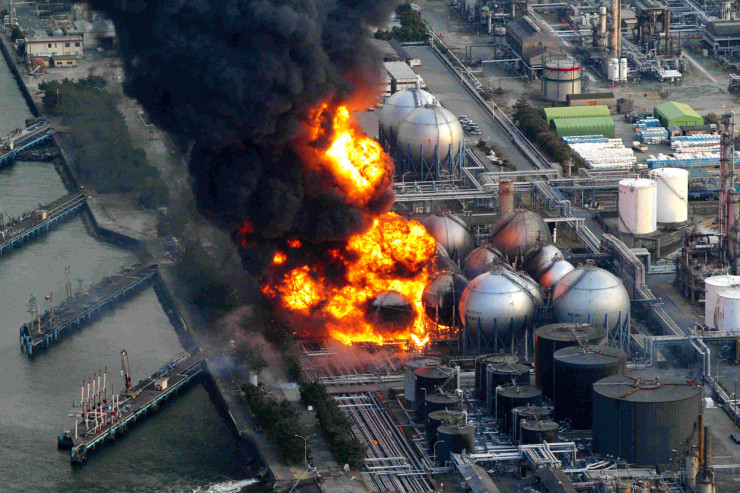 The accident was rated 7 (Major Accident) on the International Nuclear and Radiological Event Scale (INES), due to high radioactive releases. There have been only two such events to date. The other one was Chernobyl accident in April 1986.

In December 2015, a Nuclear Regulatory Commission (NRC) report on Fukushima accident was declassified. NRC is the US Government agency responsible for licensing and regulating nuclear facilities and materials. The Report covers the aftermath of the disaster starting with day 7 (18 March) after the accident.

– Except for Alaska, all thyroid dose estimates are well below the EPA 5 rem PAG.

– The environmental radiation measurements stay somewhat elevated in the north of Fukushima prefecture outside of the 30 km exclusion zone.

– Containment integrity status is unknown on Units 1, 2 and 3.

– Recommendation for evacuation of US citizens within 50 miles of the plant.

– Containment integrity status is uncertain for all 3 units. Reports of smoke (steam?) coming from Unit 2.

– Reports of smoke from Unit 3.

– Aerial Monitoring System assessments support the recommendation for evacuation of US citizens within 50 miles of the plant.

– Some indication of trace but detectable amounts of I-131 is being reported at some nuclear plants in the US (Ginna and Nine Mile).

– Some indication of trace but detectable amounts of I-131 is being reported at some nuclear plants in the US (Ginna, Nine Mile, Kewaunee, SONGS and Diablo Canyon). Requested US Office of Nuclear Reactor Regulation (NRR) assistance in reviewing Information Notice on industry data collection, similar to what was done following the Chernobyl accident in 1986.

– Containment integrity is questionable for all 3 units – particularly for Units 2 and 3.

– Some indication of trace but detectable amounts of I-131 are being reported at some nuclear plants in the US (Ginna, Nine Mile, Palo Verde, Kewaunee, SONGS, Diablo Canyon, Columbia, Millstone).

– The NRC Reactor Safety Team has provided a coordinated set of recommendations pertaining to severe accident management strategies to the NRC team in Japan.

– Japanese government officials have recommended to residents living within 20 to 30 km of the site to voluntarily evacuate their homes.

– Tokyo Electric Power Company (TEPCO) is considering spraying Zeolite on the outside and interior of the Rx Bldgs in an effort to minimize re-suspension if fission products in the air but having difficulty planning application due to the elevated dose rates.

– Highly radioactive water found outside Unit 2; source of water unclear. TEPCO stated that this water is not flowing into the ocean.

– The RST working to coordinate updated recommendations pertaining to severe accident management strategies. Revisions are being considered in light of suspected Unit 2 and Unit 3 core and containment conditions, and environmental release concerns.

– US Ambassador in Japan request for a forward looking pessimistic scenario calculation.

– Unit 1 containment pressure is decreasing due to leak.

– Unit 1 containment pressure is slowly decreasing due to unspecified leak.

– RST responding to request from site team to provide criteria regarding what a stable reactor condition looks like.

– A 6.6 magnitude earthquake occurred on 4/11 causing a LOOP and site evacuation. MELCOR Analysis indicates potential for further core damage in less than 10 hours.

– Mark Schaffer (at IAEA) has requested permission to share NRC SitRep with the Chinese government, OIP (Kirk Foggie / Steve Bloom are working). Followed-up with an email to Steve and Kirk advising against sharing a document that U.S. States and other international stakeholders have been denied.

– The Japan Nuclear and Industrial Safety Agency (NISA) is developing criteria for allowable liquid and solid rad-waste to be released into municipal.

– On April 12, 2011, NISA raised the rating for the events at the Fukushima Daiichi site on the International Nuclear and Radiological Scale (INES) from 5, “Accident with Wider Consequences”, to 7, “Major Accident”. NISA notes that while an INES rating of 7 is the same as that of the Chernobyl accident, their current estimated amount of radioactive materials released is approximately 10% of the amount from the Chernobyl accident.

– Zeolite is being placed around to absorb Cesium.

– Concerns with any plan to share the SitRep with the Chinese government are: 1) U.S. States have been denied access to this document, and 2) If we share the document with the Chinese government, this precedent could obligate us to honour requests from other international stakeholders as well. As we learned with thee NY Times article, we need to safeguard leaks of OUO information.

– As reported by Kyodo News early Thursday 21 April, TEPCO announced highly radioactive water that leaked into the Pacific Ocean from the Daiichi nuclear plant in early April contained an estimated 5,000 terabecquerels of radioactive substances – 20,000 times the annual allowable limit for the plant – with TEPCO reporting total leakage amounting to 520 tons. TEPCO estimates the leakage to have lasted for six days through April 6.

– Prior to the accident at Fukushima Daiichi, approximately 1,200 U.S. citizens were known to have lived within 50 miles of the plant but outside of the 20 km evacuation zone.