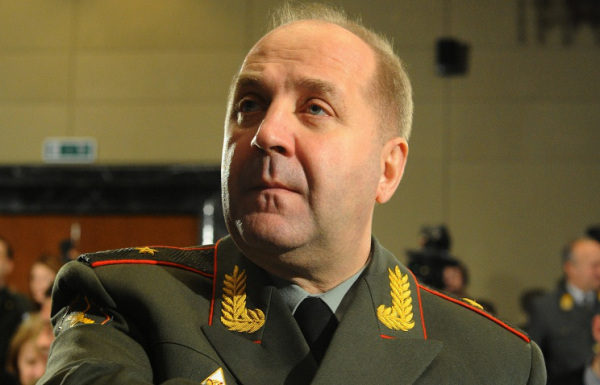 A statement posted on the Kremlin website on 4 January 2016 said that General Igor Sergun had suffered a “sudden death,” but gave no details as to the cause, timing, or circumstances. Russia’s state-run news agency, TASS, said Sergun died on January 3. Couple of days later, on 6 January 2016, quoting “sources in medical circles familiar with the situation”, Russian media said that Igor Sergun died of fatigue: “One of the reasons for his death was fatigue: over-processing, not getting enough sleep were all accompanying signs and symptoms”.

General Sergun’s death followed that of another high-ranking Russian military official, Major General Alexander Shushukin, Deputy Chief of Staff of the Russian Airborne Troops, at the end of December 2015.

The lowest-ranking head of the spy agency in decades

On 26 December 2011, Colonel General Alexander Shlyakhturov retired as chief of Main Intelligence Directorate of the General Staff of the Armed Forces of the Russian Federation (Glavnoye Razvedyvatel’noye Upravleniye – GRU). GRU, Russia’s largest spy agency, came into existence in 1918, and unlike the KGB secret police, did not dissolve or change its name following the break-up of the Soviet Union.

Little was known at that moment about Sergun’s biography and service record, except that he did not have combat experience and that he was the lowest-ranking head of the service in decades. On 3 January 2016, four years after his appointment, 58 years old Igor Sergun died suddenly in unclear circumstances. And still little is known about Igor Sergun.

Igor Sergun was born on 28 March 1957. He was married and had two daughters.

In 2014, Sergun was placed on United States and European Union sanctions lists targeting top Russian officials after Russia’s annexation of Crimea. The Council of the European Union said that “Igor Dmitrievich Sergun, Director of GRU (Main Intelligence Directorate), Deputy Chief of the General Staff of the Armed Forces of the Russian Federation, Lieutenant-General”, was „responsible for the activity of GRU officers in Eastern Ukraine”.

According to Mark Galeotti, a New York University professor and authority on Russia’s security apparatus, Igor Sergun was an extremely important figure in the revival of the GRU, an agency that was facing drastic cuts when he took it over at the end of 2011.

Under Sergun, the GRU recovered from a range of setbacks stemming from Russia’s 2008 invasion of Georgia. Although Georgia’s military was decisively beaten in the war, the GRU performed poorly during the conflict. The GRU was deemed responsible for “friendly-fire incidents as a result of poor inter-service co-operation”, including one in which six Russian paratroopers were killed.

As a result, the agency underwent severe cuts: 1,000 officers and 80 of the directorate’s 100 general-level officers were either transferred or retired. All special-forces units Spetsnaz were disbanded or moved under other military commands, while the GRU’s presence in Russian embassies abroad was dramatically scaled back.

Under Sergun, the GRU regained control of the Spetsnaz and became a crucial instrument of Russian policy. The Spetsnaz were expanded in early 2014 under the pretext of providing additional security for the Sochi Winter Olympics. And shortly after that the special-forces were crucial in the seizure of Crimea and in maintaining pro-Moscow separatists’ control over parts of eastern Ukraine.

In January 2012, in a report presented to President Dmitry Medvedev, Igor Sergun described GRU as “practically the only special service in the world” which integrates all existing types and directions of intelligence into its structure. The agency, Sergun said, combines the professionalism of secret service agents with “the usage of the most up-to-date achievements of information, telecommunication and space technologies and innovations”. Sergun added that GRU has the technical capabilities to act in almost all possible fields. In response, President Medvedev praised Sergun’s work, expressing hope that under his leadership the agency would continue working as well as it has done so far.

A few months ago, in October 2015, in one of his rare public appearances, Igor Sergun accused Washington of orchestrating the deterioration of security in Afghanistan and the expansion of Islamic State there. Sergun said that US has a long-term goal of preventing stabilization in Central Asian countries, and surrounding Russia and China with a network of regimes loyal to America and hotspots of tension.

The Afghan government in Kabul is unable to turn the tables on the militants, despite having superior weapons and numbers, Sergun said. He blamed poor planning skills of Afghan commanders and bad training of their troops for it. Sergun added that according to intelligence sources the terrorists see Afghanistan as a possible main base for Central Asia operations and this poses a real threat to the Russian Federation.