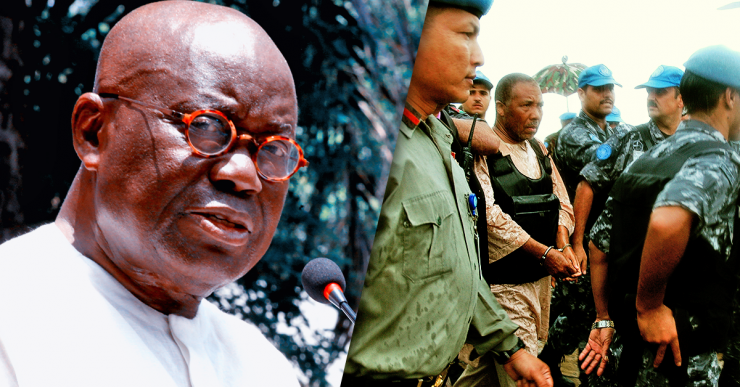 Nana Akufo Addo publicly expressed his great admiration for Charles Taylor’s “sense of statesmanship and patriotism”. After saving him in Ghana, Akufo Addo continued to vehemently oppose to Taylor’s arrest, defying the US- and UN- backed Special War Crimes Court for Sierra Leone. Akufo Addo snubbed the Interpol and announced that he is strongly against Taylor’s extradition. Despite Akufo Addo’s efforts, Charles Taylor was finally captured and sentenced to 50 years in prison. But with Taylor’s long-time friend and advocate running for president in Ghana, West Africa is again facing the threat of violence.

With Akufo Addo’s help (link), Charles Taylor evaded arrest in Ghana and returned to Liberia on 4 June 2003. The bloody Liberian civil war continued. Both the United Nations and the United States accused Taylor of being a war criminal and offered total support to the Special Court for Sierra Leone.

On 8 July 2003, the United States Congress commended „the Special Court for Sierra Leone for its work to bring justice to the people of Sierra Leone who suffered unspeakable harm as a result of the vicious civil war sponsored by President Charles Taylor and that was fuelled by the trade in conflict diamonds”.

It was again Ghana’s foreign minister Nana Akufo Addo who backed Charles Taylor and defied the international community. On 2 August 2003, after meeting with Taylor at his presidential office in Monrovia, Akufo Addo praised the Liberian dictator: “I think Charles Taylor is to be congratulated for his sense of statesmanship and patriotism.”

Pressured by the UN, the US and the rebels, Taylor resigned and flew to Nigeria on 11 August 2003. The Nigerian government provided houses for him and his entourage.

In November 2003, the US President signed a bill that included a reward offer of $2million for the capture of Charles Taylor. On 4 December 2003, the international police body Interpol issued a Red Notice (which serves as an international wanted persons notice) “to seek the arrest, with a view to transfer to the Special Court, of former Liberian President Charles Taylor, who was indicted for crimes committed during Sierra Leone’s war”. Interpol and the prosecutors of the Special Court for Sierra Leone emphasized that “there was no amnesty for war crimes or crimes against humanity”.

Nana Akufo Addo vehemently opposed Charles Taylor’s arrest. In the Ghanaian foreign minister view, even broaching the subject of Taylor’s fate was not welcome. „We are not allowing ourselves to be diverted by the Taylor issue – Akufo Addo told the New York Times in December 2003. The fate of one individual is not our concern.” According to Akufo Addo, Charles Taylor should be left at large because „he is not the first African dictator in exile”.

The Interpol put Taylor on the World’s Most Wanted list, alerting police forces around the world to the arrest warrant issued by Special War Crimes Court for Sierra Leone and boosting an international hunt to bring the former Liberian president to justice.

Charles Taylor was arrested in Nigeria on 29 August 2006. Hosted in The Hague, in the Netherlands, for security reasons, his trial opened in June 2007. On 26 April 2012, the Special Court for Sierra Leone unanimously ruled that Taylor was guilty of aiding and abetting war crimes and crimes against humanity. He was sentenced to 50 years in prison. His appeal was dismissed.

Charles Taylor, one of the cruellest dictators in Africa, was convicted on all 11 charges including terrorism, murder, rape, inhumane acts, use of child soldiers and enslavement. He is now serving his sentence in a UK prison.

Nana Akufo Addo, Charles Taylor’s long-time friend and advocate, who is also known as a violent individual, is Ghana’s opposition candidate in the ongoing presidential campaign. West Africa is again facing the threat of brutal repression.