France – when the people say “Enough!” 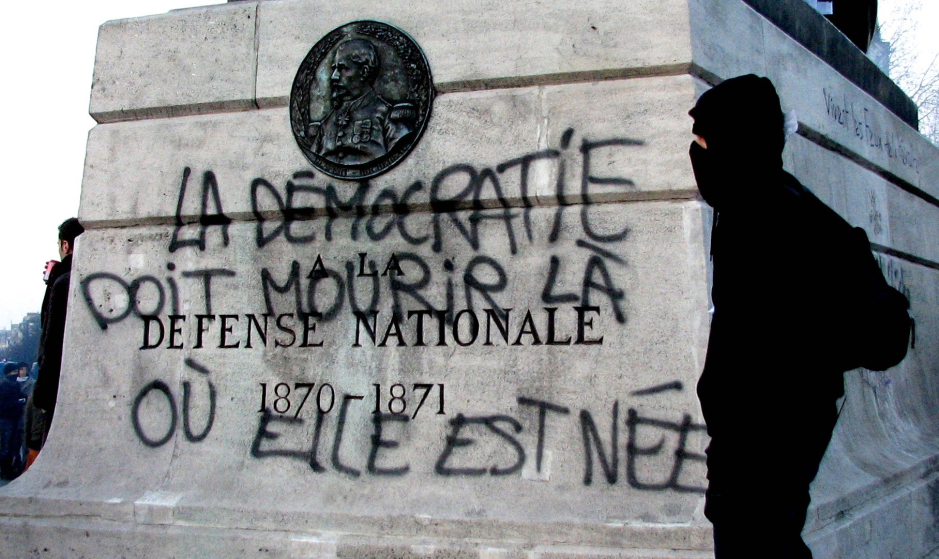 The recent protests in France have shown us the fragility of a Western developed nation to tackle social issues that have been brewing within its mist for decades already, slowing eating away at the very fabric of the contract that exists between the citizens of the nation and the political class that represents them. Make no mistake – the last four weeks of protest have indeed started after the French government raised the fuel taxes, but this isn’t the sole problem at stake, not at all. An increase of the taxes, an eroding middle-class that is slowly disappearing, a political class that seems to be as disconnected as ever from the rest of the population, uncontrolled immigration, these are some of the most pressing issues that made the protests happen in the first place.

What started it all

After signing the Paris Agreement, a pledge to reduce CO2 emissions in order to combat global warming, France saw itself as one of the front-runners in the race to completely transition its fleet of cars from diesel to electric by the year 2030. However, in order to do so, the authorities had to increase taxes for fuel, as to encourage the population to gradually switch to electric in the up-coming years. This particular measure, though, has hit the rural middle-class right under the belt, leaving them completely exposed to a very difficult paradox: continue to use the diesel cars and pay more money for fuel, or save up money to buy an electric car in the next couple of years – An impossible task, many say, given the fact that an average French taxpayer will pay more than 60% of his monthly income back in taxes (including VAT).

After winning the Presidential election, Macron was seen as a President that had no ideologically-driven platform, many people believing that he will run the country on the same centrist platform that got him elected in the first place. However, President Macron started making some very weird reforms and allegations – like cutting taxes for the very rich, increasing taxes for the middle-class, alienating the poor by telling them that “if they want to find work, they can just cross the street and do so”, telling the French people that “there is no French culture” and so forth. This, in turn, has made him one of the most unpopular President in the history of the Fifth French Republic, with many polls showing him at less than 25% support, even before the protests started.

Now, we can already see where this is going – a President that has managed to infuriate so many social classes is definitely no a President that will have an easy task in running the country. And after announcing that the fuel price will increase, in a country where the fuel is already taxed a lot by the Government, the people finally showed him that they had enough. More exactly, the middle-class in France, a class that has slowly disappeared in the last couple of decades, has turned to the streets to show its frustration regarding the way France is being run. Thus, the “Yellow Vests” movement emerged, named after the reflecting vest that every French car-driver is required by law to have in his or her car. 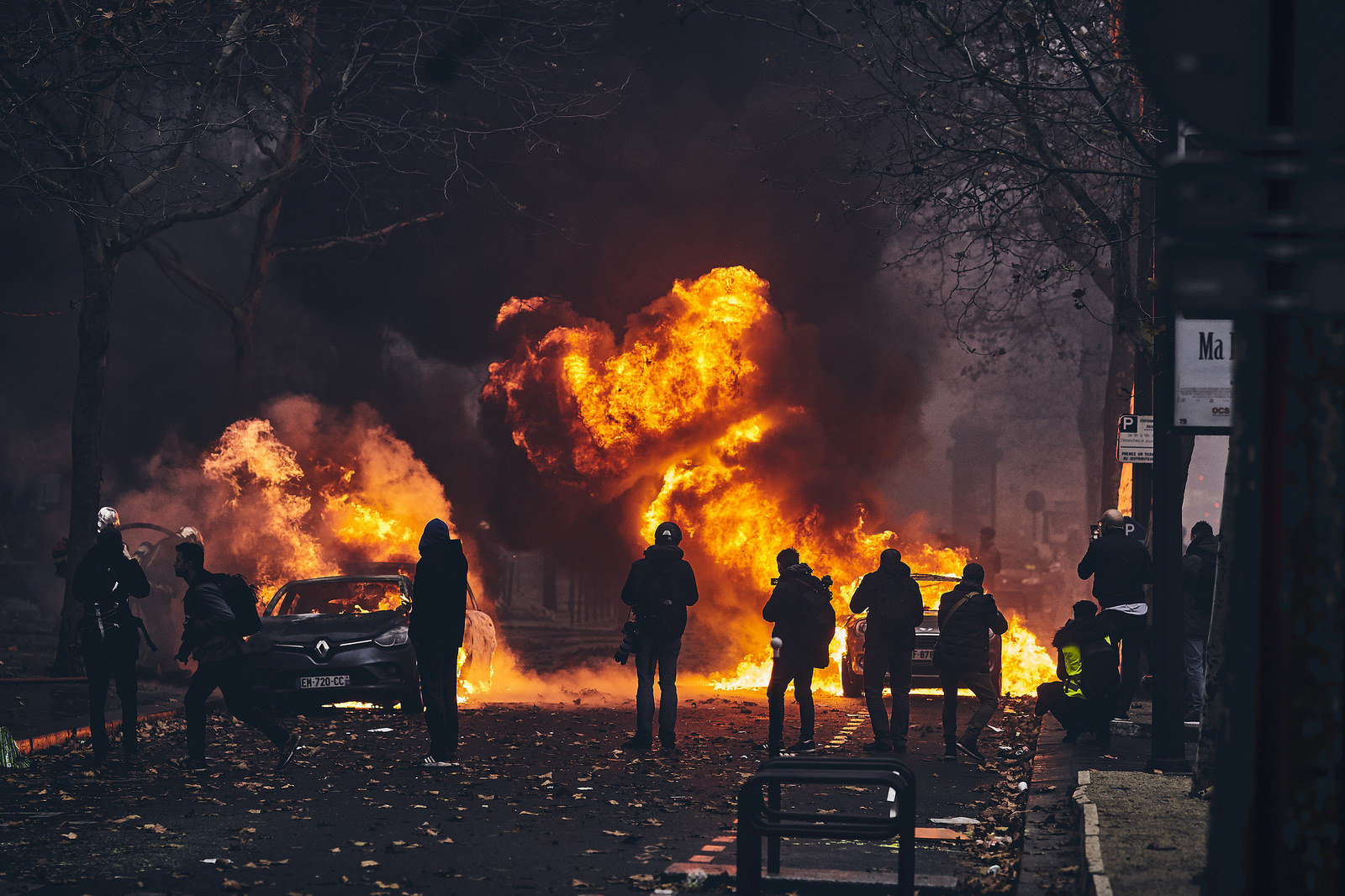 We’re now in our fifth week of the “Yellow Vests” protests. But these are not just your ordinary “let’s go outside on the weekend and shout” type of events, not at all – they have morphed into something powerful that hasn’t been seen on the European continent since the student movements from the 60’s. The people are effectively blocking the French state from conducting normal economic business on the weekdays, by either showing up on the highways and disrupting traffic, by destroying tollbooths, or by not allowing the gas stations to restock with fuel. And on the weekends, the French turn to the streets in all the major cities to cause havoc and to shout “President Macron, resign!” repeatedly. This, in turn, has made the French Government lose millions and millions of euros in revenue, with the sum growing by each day.

It hasn’t been all pretty though – in the last two weekends, the French have clashed with the authorities in a very violent matter, leaving thousands of people arrested or hospitalized. Many have started questioning the possibility of a civil-war starting, given the violence that has taken the streets. Countless of people have been gassed by the French Gendarmes, others have been shot by rubber bullets, barricades have been set up by the protesters on the streets, shops have been set aflame and authorities and politicians alive have been threatened more than once by the angry people. 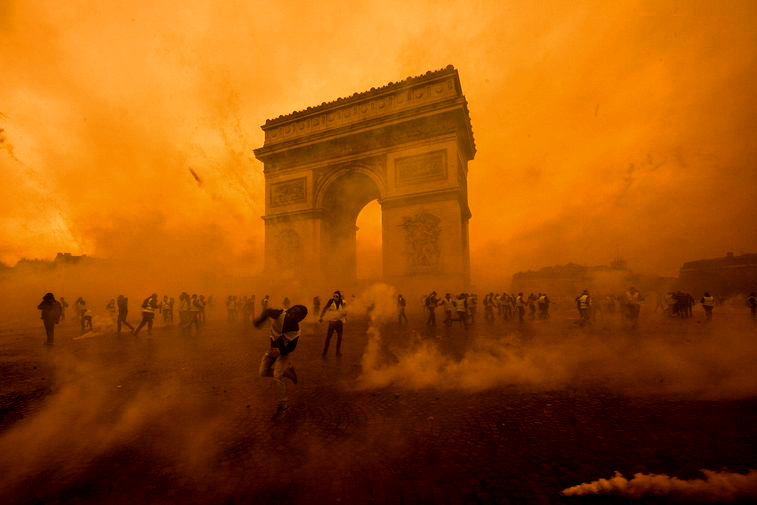 Only this past Saturday, more than 2000 people were arrested by the National Police, in a show of force never before seen on the French soil, not since the student protests in the 60’s. Dozens of other protesters have ended up hospitalized after clashing with the French authorities, who have effectively mobilized all of its reserve units (more than 90.000 Police and Gendarmes for the last weekend only) in order to stop the protests from spreading even further. Things aren’t looking pretty, and the French protesters have pledged to continue their protests until President Macron resigns and new general elections are planned.

The French President, Emmanuel Macron, addressed the nation yesterday for the first time since the protests started, announcing a raft of measures aimed at pleasing the “Yellow vest” movement. In his much-anticipated address to the nation, Macron pledged that everybody will get a “€100 a month increase in the minimum wage from 2019”, an exemption from a recent rise in social security tax for pensioners on low incomes and the total abolition of taxes on overtime pay, all measures taking place from 2019 onward. 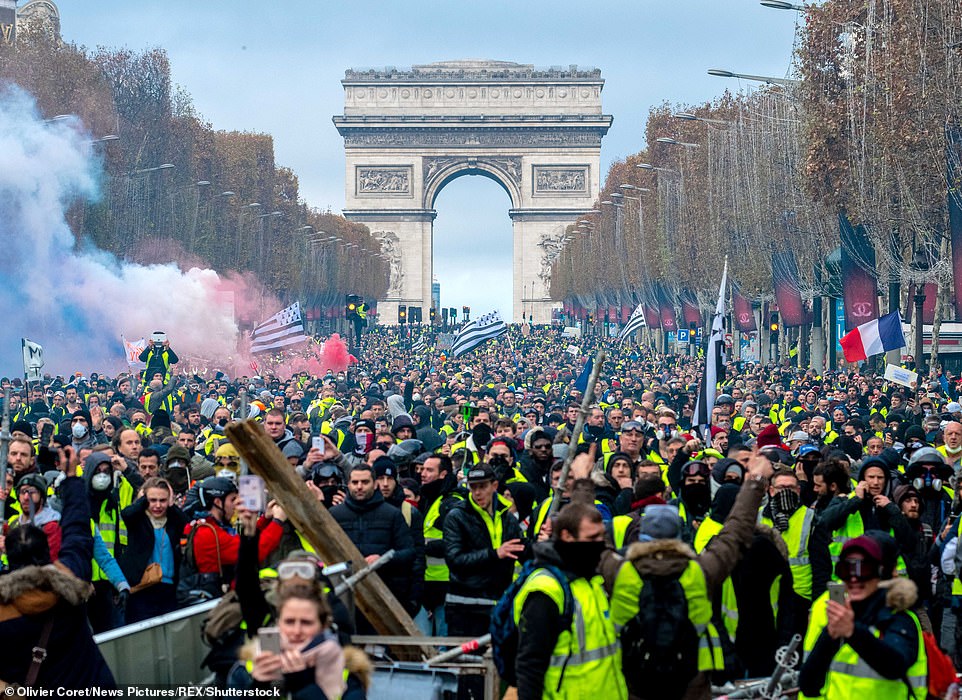 “Too little, too late”, a lot of protesters say. These measures, if taken, will overburden the already decaying French economy, with just the minimum wage hike being equivalent to about €2.5bn. Where will all the funds come from? Well, it certainly won’t be coming from the companies, which means that the state will have the provide the funds – which, in turn, means that the taxpayers themselves will fund all of this.

“It will not be paid by companies, as some small business would then be forced to reduce their workforce or postpone hiring. It will have to be added to the budged deficit, which is already at risk of exploding the 3 percent limit imposed by the European Union”, said Vittori, a French entrepreneur.

The European future is uncertain

It remains to be seen what the end results will look like. It seems, however, that the “Yellow Vests” are adamant at pushing forward with their protests, with another one being planned for this Saturday. The most important question right now is whether Macron, who is faced with the most serious political crisis since the beginning of his presidency, will be able to convince the general public, the trade unions, the regional mayors and the civil leaders to back his platform and to stop protesting and disrupting the French economy.

Nevertheless, the European continent is currently experiencing a crisis the likes we haven’t seen in a long, long time. The popular rage against the political class is at an all time high and the risk of these protests spreading in other European countries is definitely on the table, as seen in the last weekend with the “Yellow Vests” movement that went on the streets in Brussels, Belgium. If the current political class doesn’t address the crippling issues that have seen the middle-class all but disappear under a burden of taxes and social welfare, the European Union will be in for a rough wake-up next year, when the European Parliament elections (MEPs) are due.

“A dialogue has been started”, said Thierry Paul Vallette, a Yellow vest leader in Paris. “But the protests will continue”.