Home
Corruption
A Failure of the Belgian State. The Story of Naturalization and Punishment

A Failure of the Belgian State. The Story of Naturalization and Punishment 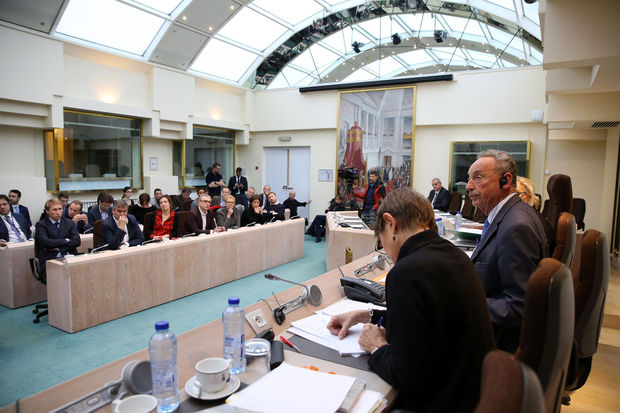 Belgian authorities allowed various oligarchs and their families to live and do business in Belgium. They saw no problem with that. Some of them – Patokh Chodiev and Alijan Ibragimov, for instance – even obtained Belgian citizenship. Now, the same authorities blame the oligarchs for being Belgian citizens, and play the card of moral outrage. Non-politicians call this “double standard.”

We’re dealing with a clear case of moral failure and corruption because the same authorities who play radical righteousness today were more than lax and benevolent when this benefited them.

The Chodiev case – the so-called Kazakhgate –is about the Belgian state and the Belgian politicians. When they attack people like Chodiev they reveal the system they created, and they defend it (and their own prestige) by feeding the public with the right scapegoats.

Patokh Chodiev, the Uzbek oligarch, got his Belgian citizenship in 1997. The process of naturalization is contested these days in the Belgian media, and also in the Belgian Parliament, who created a special commission to investigate the case.

Back in 1997 however, it seems that nothing was wrong. The Belgian intelligence and the Public Prosecutors had no objections, all the papers were in order, there were no complaints. A Belgian policeman now claims that things were shady even then, but his superior contradicts him. (source: http://www.lalibre.be/)

It is a strange case where secret (and dubious) documents suddenly pop up in the press, and where at least some witnesses do seem unreliable. It even appears that Chodiev had close links with the Belgian intelligence (http://www.brusselstimes.com/), something that both parties strongly deny.

The very fact that politicians are investigating the events really makes no sense. If something is wrong with Chodiev, it is for the prosecutors to investigate and for the judges to decide, not for the politicians. This is how things work under a genuine rule of law.

New information suggests that Belgian intelligence services did write a report on Ibragimov, demanding for his request to be denied, but they were also unable to send it within the 30 days period. (source: http://www.lalibre.be/)

The third member of this so-called “Kazakh trio,” Alexander Machkevitch, never acquired Belgian citizenship, although he has properties in Belgium.

All this suggests that the Belgian state had no problems to let the “trio” in, and to offer Belgian citizenship to Chodiev (and later to Ibragimov). Either because of some form of cooperation, or because of bureaucratic negligence, the three men and their families were free to stay and to do business in Belgium.

The situation is not unique. London, for instance, became a destination of choice for Russian oligarchs. Everywhere, the authorities had to answer a moral question: “Do we let this people in, because they’re rich and we like their money, or do we keep them out?” Both in Belgium and in the UK, they let them in.

The difference between the UK and Belgium though is that the Belgian politicians suddenly and hypocritically pretend that some conscience grew on them. So they attack the most obvious and the easiest targets, in order to hide their own moral decrepitude or some other, far bigger villains like Société Générale – a tactic that OSI has already dismantled.

There is, however, one question left unanswered: why do (some) oligarchs move to Belgium?

Belgium, a Paradise for the Rich

A report from 2001 by Bloomberg advertised that Belgium has no capital-gains taxes on the sales of companies, and also no wealth tax. And there are plenty more avenues for “aggressive tax planning.” (source: https://www.bloomberg.com/)

In 2010, Forbes included Belgium in its top ten list of tax heavens, at number 9: http://www.forbes.com/.

At the end of 2015, a study financed by the European Commission found that Belgium is a tax heaven, second after Netherlands in the European Union. Notional interests, excess profit rulings and incentives for patents and R&D feature amongst the active indicators for aggressive tax planning identified by the study. (source: http://www.brusselstimes.com/)

At the end of 2016, an Oxfam report placed Belgium in the top 20 of the world’s worst corporate tax havens – “extreme examples of a destructive race to the bottom on corporate tax which has seen governments across the globe slash corporate tax bills in an attempt to attract business.” (source: http://www.lesoir.be/)

A paradise for the rich and sometimes infamous

As a result, Belgium became for a long time a place where rich people relocate their businesses. The 2001 Bloomberg report mentioned above focuses on the Dutch exiles, which were estimated at around 60.000 back then, most of them tending to congregate in the suburbs of Anvers.

Another investigation, conducted by the Belgian newspaper L’Echo in 2009, found that 20 of the top 100 richest French people were either living, or having their businesses relocated in Belgium. Among them the Mulliez family, owners of the international retail group Auchan, and the French actor Gerard Depardieu, who later became a Russian citizen. (source: http://www.lesechos.fr/)

A system of corruption

In 2000, Belgium was still perceived as the third most corrupt country in the region, after Greece and Italy: http://www.transparency.org/.

The situation vastly improved since then. In 2016, Belgium was perceived as one of the least corrupt countries in the world. However, it is worth mentioning that in 2010, Belgium was still in the grey area, although doing better than France, Spain, Portugal, Italy and Greece: http://www.transparency.org/.

The people who belong to the Belgian political elite today are roughly the same since 2000, with very few newcomers making it to the top. Therefore, it is them who built Belgium as a toxic combination of corruption and tax facilities for the rich. This combination attracted quite a bunch of unsavory characters to Belgium.

It’s perfectly OK to investigate these unsavory characters. If found guilty, they should pay. However, the politicians who created this situation should pay too. They should also be brought to justice. This will be the ultimate test for the Belgian society. Otherwise, it’s all just a show meant to satisfy the public and to keep the real culprits out of jail, with their prestige intact and with their pockets still full of money.