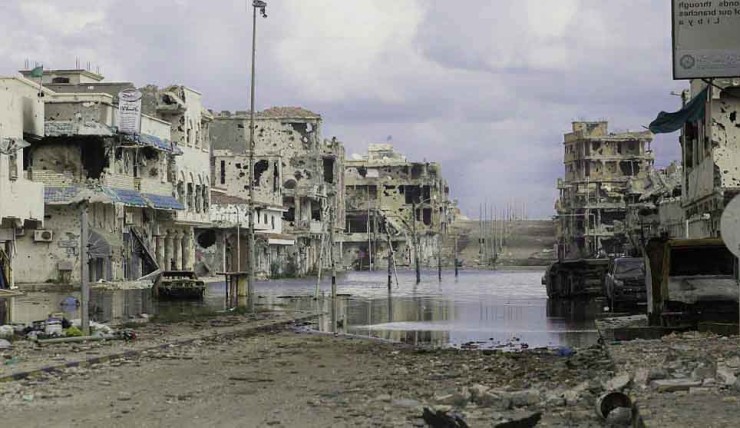 On 17 March 2011, United Nations Security Council adopted French-proposed Resolution 1973 on the situation in Libya. The resolution formed the legal basis for military intervention in the Libyan civil war, authorizing the U.N. member states to “take all necessary measures to protect civilians and civilian populated areas”.

President Barack Obama called French President Nicolas Sarkozy and British Prime Minister David Cameron after the U.N. Security Council vote. The three “agreed that Libya must immediately comply with all terms of the resolution and that violence against the civilian population of Libya must cease”.

Two days later, on 19 March 2011, at the invitation of President of the French Republic, the Paris Summit for Support to Libyan People took place in Paris. A declaration was adopted at the end of the summit: “The situation [in Libya] is intolerable. We express our satisfaction after the adoption of UNSC 1973 which, inter alia, demands an immediate and complete ceasefire, authorises the taking of all necessary measures to protect civilians against attacks and establishes a no-fly zone over Libya.”

In a press conference in Paris, the US Secretary of State Hillary Clinton declared that “the international community came together to speak with one voice and to deliver a clear and consistent message: Colonel Gaddafi’s campaign of violence against his own people must stop.”

After meeting Hillary Clinton and the other leaders in Paris, President Sarkozy announced: “Along with our partners, France has decided to play its part before history. Those taking part agreed to put in place all necessary means, especially military, to enforce the decisions of the United Nations Security Council. This is why, in agreement with our partners, our air forces will counter any aggression by Colonel Gaddafi’s aircraft against the population of Benghazi. The Libyan people need our aid and support. It’s our duty. In Libya, a peaceful civilian population that is seeking only to be able to choose its own destiny has found itself in mortal danger. It’s our duty to respond to their appeal. Today we are intervening in Libya under the U.N. mandate. We are doing it to protect the civilian population from the murderous madness of a regime that in killing its own people has lost all legitimacy.”

That same day, a multi-state coalition began the military intervention in Libya.

Hillary Clinton stepped down from Secretary of State on 1 February 2013. In March 2013 a hacker distributed emails sent to Clinton from her long-time advisor, Sidney Blumenthal. The emails, sent to Hillary Clinton’s private address, were obtained by illegally accessing Blumenthal’s email account and dealt with issues in Libya.

In March 2015, it become publicly known that, in 2009, Hillary Clinton set up an email server at her home and exclusively used a private email server for all her electronic correspondence throughout her time as Secretary of State.

As a response to a Freedom of Information Act lawsuit, an U.S. District Judge issued an order calling for the rolling production and release of the Hillary Clinton’s emails from her time in office. The State Department is required to release as many of her emails as they can in a single instalment on the last weekday of every month.

An email from the 31 December 2015 batch of 3,105 has raised serious questions about the real motives behind the coalition military intervention in Libya.

Not so much about „protecting civilians”, but about oil and „tons of gold”

The email was sent to Secretary of State Hillary Clinton by Sydney Blumenthal on 2 April 2011, two weeks after the beginning of the military intervention. Clinton’s advisor stressed the central role played by the French President Nicholas Sarkozy in the war against Muammar Gaddafi and detailed Sarkozy’s motivations.

Muammar Gaddafi, Blumenthal said in his email to Clinton, hold huge amounts of gold and silver accumulated before the beginning of the Libyan civil war. Gaddafi’s plan was to create a gold-backed African currency to provide an alternative to the CFA franc, the prime Francophone African countries currency which is guaranteed by the French treasury.

“Qaddafi has nearly bottomless financial resources to continue indefinitely, according to the latest report we have received:

On April 2, 2011 sources with access to advisors to Salt al-Islam Qaddafi stated in strictest confidence that while the freezing of Libya’s foreign bank accounts presents Muammar Qaddafi with serious challenges, his ability to equip and maintain his armed forces and intelligence services remains intact. According to sensitive information available to these individuals, Qaddafi’s government holds 143 tons of gold, and a similar amount in silver. During late March 2011, these stocks were moved to SABHA (south west in the direction of the Libyan border with Niger and Chad); taken from the vaults of the Libyan Central Bank in Tripoli. This gold was accumulated prior to the current rebellion and was intended to be used to establish a pan-African currency based on the Libyan golden Dinar. This plan was designed to provide the Francophone African Countries with an alternative to the French franc (CFA).”

Quoting “knowledgeable individuals”, Blumenthal informed Clinton that the discovery of Gaddafi’s secret plan was one of the main factors leading to the French President decision to attack Libya.

“Source Comment: According to knowledgeable individuals this quantity of gold and silver is valued at more than $7 billion. French intelligence officers discovered this plan shortly after the current rebellion began, and this was one of the factors that influenced President Nicolas Sarkozy’s decision to commit France to the attack on Libya.”

Based on the information gathered from the same “knowledgeable individuals”, Blumenthal concluded that the French President was interested in Libya’s oil, French political and military influence abroad and his personal political career at home. But most importantly, Sarkozy’s purpose was to stop Gaddafi’s influence in Francophone countries.

“According to these individuals Sarkozy’s plans are driven by the following issues: