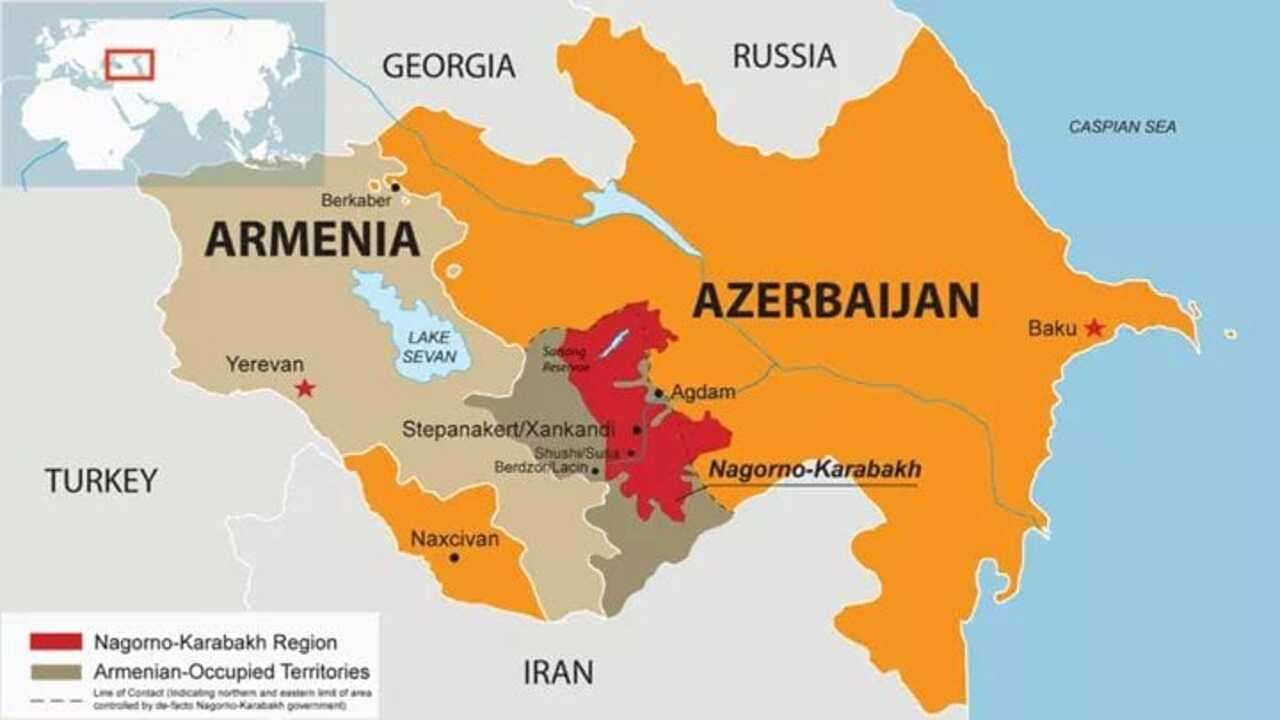 The past few weeks have been quite tense on the Armenian-Azerbaijan border, with the two countries waging a full-scale war over the disputed Nagorno-Karabakh territory. This piece of land, located right at the border of these two countries, has been a bone of contention between Armenia and Azerbaijan for decades. Both states consider the territory as rightfully theirs, and frequent skirmishes have erupted there since the 90s. But never like the current one, which has seen almost half of the Armenian population evacuated and hundreds of soldiers from both sides killed in action.

But why are Armenia and Azerbaijan fighting over the disputed Nagorno-Karabakh region? Well, it’s complicated. During the messy break-up of the Soviet Union, as both countries struggled for self-determination, Nagorno-Karabakh emerged as a breakaway region. Soon enough, the ethnically Armenian enclave found itself within the territory of Azerbaijan, despite the fact that the people of the region wanted to govern themselves or to join Armenia, as they once voted to do. A brutal war soon emerged that saw the deaths of more than 30.000 people and by 1994 a ceasefire was negotiated between Armenia and Azerbaijan.

In the next 30 years, little has been done to resolve the status of Nagorno-Karabakh. Periodic military skirmishes between the two sides saw casualties, both civilian and military, pilling up, but to no diplomatic avail. And in late September 2020, heavy fighting broke out along the border, with more than three hundred soldiers and civilians being killed, and hundreds more wounded on both sides.

Despite the UN Secretary-General Antonio Guterres, the UN Security Council, and countries like the United States and Russia calling for an end to hostilities, Armenia and Azerbaijan have both rejected pressure to hold talks. Instead, they have pledged to continue fighting and have further escalated tensions by switching from cross-border shelling to the use of longer-range artillery that could potentially target cities and military installations outside of Nagorno-Karabakh.

Why is this conflict different than the ones in the past? Well, mainly because now it could potentially drag other bigger countries into the mist. Russia has promised to defend Armenia proper, while Turkey has pledged to support Azerbaijan. Moreover, Iran has a large Azeri and Armenian minority groups, which could further escalate the regional crisis. Without successful mediation efforts, the renewed tensions threaten to reignite a military conflict between the countries and destabilize the South Caucasus region. This, instead, could disrupt oil and gas export from the region since Azerbaijan is a significant oil and gas exporter to Central Asia and Europe.

Turkey has offered more direct support to Azerbaijan, it’s direct engagement into the war being that of supporting its ethnic Turkic ally. Turkey’s move goes hand in hand with Erdogan’s plans to extend Turkish influence in geographical areas that it deems as important to its neo-ottoman revival plans. But this geopolitical move might anger Russia, who sees the area as being part of the traditional Russian influence zone.

Ever since Turkey has declared its open support to Azerbaijan, the conflict has escalated far from the front lines. Cities in Azerbaijan, Nagorno-Karabakh and Armenia have been hit by long-range weaponry fired by combatants on both sides. The capital of Nagorno-Karabakh, Stepanakert, has been repeatedly bombarded, and Azerbaijan’s second largest city, Ganja, has been repeatedly targeted by Armenian rockets. On October 10, the countries agreed to a limited cease-fire brokered by Russia to exchange prisoners and collect the dead from the battlefield, but the cease-fire agreement was broken mere minutes after being signed.

The uneasy cooperation between Turkey and Russia, which kept the Western world on its toes for the past few years, has rapidly started to fade away, as both countries have become increasingly assertive in the Middle East. Relations between Turkey and Russia have deteriorated in the past year, after Russian airstrikes in Syria killed Turkish soldiers and after Turkish backed Syrian militias have targeted Russian soldiers in Syria. Moreover, in May, Turkey deployed military advisers, armed drones, and Syrian proxy fighters to Libya to push back a Russian-supported rival faction in that war.

Now, Armenia has said that Turkey is directly involved in the fighting in and around Nagorno-Karabakh. Specifically, Turkish F-16 fighters have targeted and even shot down an Armenian jet. Turkey tried to deny these accusations but had to concede on them soon after satellite images revealed Turkish F-16s parked on an Azerbaijani airfield. Now, multiple reports from Russia and France claim that Turkish-backed Syrian militants have been deployed to Nagorno-Karabakh to fight the Armenians.

Neither side appears willing to compromise, with rhetoric having grown harsher in the recent days. President Ilham Aliyev of Azerbaijan has threatened a further escalation of his offensive, while his Armenian counterpart is looking for direct war support from Russia. The conflict has already killed hundreds of Armenian and Azerbaijani soldiers and has seen tens of thousands of Armenians evacuated from the region.

Distracted by other issues such as the pandemic or the presidential election, the United States of America has largely ignored the conflict. Other international mediators have missed warning signs and possible openings for diplomacy as well. As of now, only Turkey and Russia seem to draw nearer as possible mediators, but the prospects for a peace deal appear dim. As mentioned above, a cease-fire brokered by Russia on Oct.10 has failed to hold, which shows that despite its projected strength, even Russia doesn’t have the diplomatic clout to end a conflict that is located right near its sphere of influence.

If the regional conflict escalates, the only country that has something to gain is Turkey. By showing the world that Russia can’t look after its own allies, Erdogan is essentially opening the Pandora Box for further escalations. And given the bad economic situation in Turkey, and the spread of the coronavirus pandemic there, Erdogan’s only solution is to stay in power is to wage asymmetrical war against his imaginative enemies. It’s either Ottoman Empire 2.0 or his fall from grace.