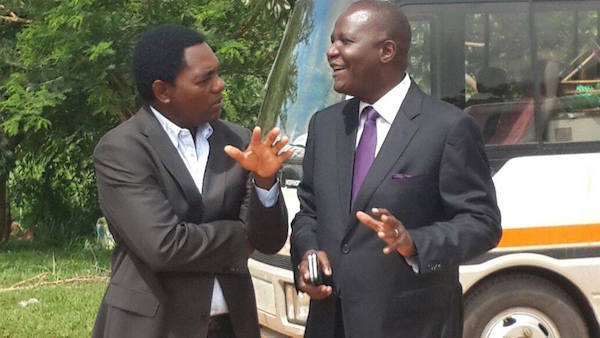 Edgar Lungu’s decision to appoint Felix Mutati as Finance Minister is a clear message to the IMF and the World Bank: Zambia is again ready to follow IMF’s austerity policies. Mutati, who was minister in Mwanawasa’s and Banda’s governments, played a key role in approving and carrying out IMF’s prescriptions. Zambian economy collapsed as a result of IMF and World Bank policies praised by Mutati. Now IMF is again proposing a “rescue package” for Zambia. International financial institutions are convinced that Zambian Government will accept their prescriptions. Felix Mutati, IMF’s man in Zambia, is back in the Cabinet.

Mutati: Zambians should be grateful to IMF

Eight months earlier, in December 2015, Felix Mutati, the leader of one faction of the Movement for Multiparty Democracy (MMD), was criticizing PF’s government for “failing to meet its projected economic targets”. There was only one option left for Zambia, according to Mutati: “serious consideration must be made in 2016 to engage the International Monetary Fund (IMF) as a partner in economic management”.

Felix Mutati has always been a supporter of policies designed by the IMF and the World Bank for Zambia, including privatization and removal of subsidies. From 2002 to 2011, Felix Mutati was a member of successive MMD governments, holding various positions, from Finance and National Planning Deputy Minister, to Commerce, Trade and Industry Minister. For almost a decade, under both Levy Mwanawasa and Rupiah Banda, Felix Mutati played a key role in approving and carrying out IMF and World Bank’s prescriptions.

As a member of MMD cabinets, Mutati has repeatedly lashed out at Zambians who were criticizing the IMF and World Bank. In December 2002, defending the international financial institutions’ policies at a World Bank sponsored seminar, Finance Deputy Minister Felix Mutati accused the unions of being responsible for unemployment and poverty. In June 2004, Mutati publicly asked Zambians to be grateful to the IMF and the World Bank, whose policies “were all meant to develop Zambia.”

In July 2004, Mutati cited his government excellent relationship with the IMF as a proof of MMD’s “competent manner of managing country’s economy.” In March 2007, speaking in Parliament as Energy and Water Development Minister, Felix Mutati commended the World Bank for the “assistance” provided to Zambia’s economy.

It is a historical fact that IMF’s and World Bank’s policies in Zambia were a failure. Economic scholars consider Zambia as “one of the worst and one of the most clear-cut cases of the failure of IMF and World Bank policies.” Zambian economy has collapsed as a result of IMF and World Bank interventions. And the collapse would not have been possible without the complicity of top politicians like Felix Mutati.

IMF’s prescriptions affected the workers and the poor, but also Zambian business community.

Tens of thousands lost their jobs and poverty spread rapidly. Key industries were completely destroyed. Once a regional leader, Zambia’s textile industry collapsed after the government’s decision to follow IMF’s instruction of removal of import tariffs on used clothes. The elimination of subsidies on maize and fertilizer severely damaged the agricultural sector.

The perennial IMF supporter is back

But the Finance Minister was not telling the truth. A couple of days after Mutati’s briefing of the Parliament, the chief of IMF’s mission in Zambia announced that it was IMF that proposed urgent measures, including restructuring of the civil service, privatization of the remaining state-owned firms and removal.

IMF is convinced that Zambian Government will accept its set of “urgent measures.” Felix Mutati, IMF’s man in Zambia, is back in the Cabinet.