Home
Turkey
Turkey: between a Western world and a New Ottoman Empire

Turkey: between a Western world and a New Ottoman Empire 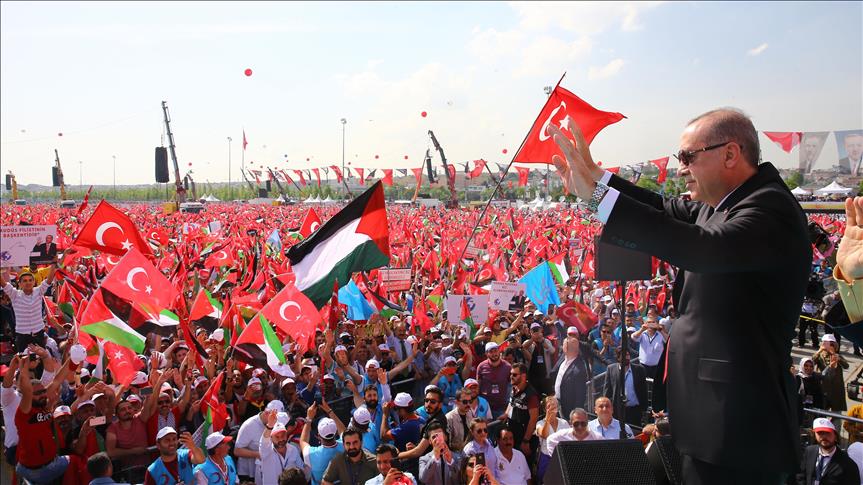 With less than a few weeks before the Turkish Presidential election, Turkey’s islamists and secularists have shocked the establishment by announcing that they would join forces in order to unseat Erdogan, a move seen as a desperate attempt to oust the Turkish President that has tried to secure a tight grip on the country, ever since the failed 2016 coup against his administration. Opinion polls show that the islamists and secularists are performing exceptionally well, but given the damage inflicted to key institutions of the state in the last year, Erdogan is poised to win yet another election.

Although Erdogan remains one of the most powerful and popular politician in Turkey, the coalition that would have been unimaginable just a decade ago – the one between staunched secularists and islamists – is something to look after, especially because it shows how desperate the Turkish opposition truly is in their bid to not allow Erdogan to take full control of their nation. In an environment of declining freedom of expression and continuous purges of dissidents that have seen more than 200.000 people either imprisoned or prosecuted, this race represents the way Turkey will look like in the upcoming decades.

Temel Karamollaogly, a Manchester-educated head of the Saadet, the largest Islamist party in Turkey, has recently made statements in which he accused Erdogan of the failures that have engulfed Turkey in the last couple of years: a high unemployment rate, a widening trade deficit, a chaotic foreign policy that has isolated Turkey from its Western allies, a stalled European Union membership application and a state of emergency that hasn’t been lifted ever since the failed 2016 coup.

“The policies that Erdogan or his government are following do not help Turkey stand up on her own feet in almost all aspects and policies, whether economic or foreign policies. His method of approach, the discourse, causes polarisation in Turkey. He is in great extent disrepectful to the upholding of law”, Karamollaoglu told the press.

When looking from the outside, this approach undertaken by Temel Karamollaogly, to oppose Erdogan’s policies, is something truly interesting, as it shows that a significant proportion of the Islamist electorate doesn’t support the President whatsoever, even though Erdogan has portrayed himself as the global defender of Islam, trying hard to position his persona as not only a champion of the Muslim causes in Turkey, but also all across the Muslim world. To put things under a scope of irony, the former leader of Saadet is no other than Necmettin Erbakan, the father of Turkey’s modern political Islamist movement and a former mentor of Erdogan himself.

In support of Saadet in this election is the Republican People’s party (CHP), the main secular opposition bloc. It might seem strange that a staunchly Islamist party has allied itself with a secular party, but both are united by their opposition to the president and the path he has undertaken for Turkey.

“We don’t have the same policies or the same understanding of governance, in economics, in foreign policy, but we have certain principles we agreed, [like] separation of government and the judiciary, press freedom, lifting of the state of emergency”, Karamollaoglu said.

These attempts show how the main opposition parties are struggling to break away parts of Erdogan’s conservative and religious electorate. Be it alliances made between old rivals, or PR campaigns for the candidates in order to paint them as pious as Erdogan himself, the opposition is doing anything it can to stop the rise of the “sultan”. And help might arise from a group of people that have been oppressed in Turkey: the conservative voters in the Kurdish areas who have seen Erdogan’s military operations against Kurdish militias in Syria as a crackdown on all Kurds.

What does Erdogan want?

The million dollar question that everybody seems to be asking themselves for a lot of time already. Erdogan’s approach when it came to his traditional allies, after the 2016 coup, clearly showed that he manifested a deep distrust in them, especially in the NATO elements in Turkey that he saw as possible participants in the coup. Moreover, his state of emergency that saw more than 200.000 people imprisoned or prosecuted brought upon itself the active criticism of the Western world, who accused Erdogan of infringing on the democratic beliefs of the Turkish people.

Erdogan seems to be “suffering” from the same grandiose disease of other leaders, such as Russia’s Putin, who actively try to put themselves on a pedestal, acting as the “fathers” of the nation and projecting the once-mighty power that they used to be at some point in history. While many people point out that Putin is the new “tsar” of Russia, the same can be said about Erdogan wanting to become the new “sultan” of a reinvented Ottoman Empire. An appeal to a period of time that most people feel nostalgic about, mainly due to the constant geopolitical struggles that their country have faced in the last few decades. As seen in countless ex-communist countries, when economic hardships reach the people, they will revert to the beliefs that the “old times” were better, even if the state control over the population was higher than ever.

In the meanwhile, Ankara’s relations with its traditional US and European partners have taken a turn for the worse. Among the US refusal to hand over the Islamic cleric Fethullah Gulen, who Erdogan has formally charged as the mastermind behind the 2016 coup, and Brussel’s resistance to Turkey’s bid to join the European block, a shocking revelation has manifested itself, with a recent poll revealing that an overwhelming majority of Turks see Western countries as Turkey’s “enemies”.

What’s next, then? We just have to wait for the elections to finish and see who the Turkish people will elect to run their country. But this is not only about who will be President, no – this presidential run is actually about the future of Turkey as a whole, considering the implications of what Erdogan wants for the country. Even though most observers already paint Erdogan as the decisive winner, we’ll have to watch out closely for the Turkish opposition and hope that the Turkish people truly know what’s to come after they cast their vote.

The future looks grim for Turkey, no matter who wins. The fracture that has appeared between the younger and older generations has grown to unparalleled levels and the wounds inflicted on the spirit of the pro-Western segments of the population after the 2016 coup have not healed whatsoever. This is truly a test for the entire nation, a test that Ataturk wouldn’t have thought it might be possible after decades of secularist rule.